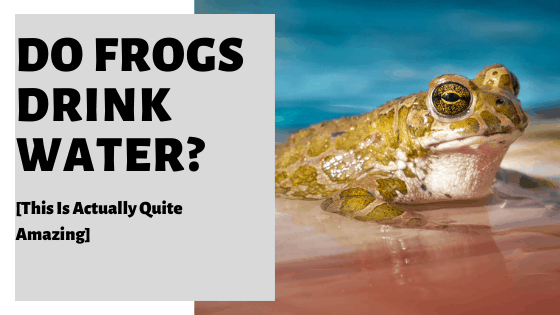 Every animal, from ant to elephant, requires water in order to survive, and frogs are no exception. But how do they get the hydration they need? Is it through the physical act of drinking? Here is all you will want to know.

So, do frogs drink water? Frogs do not drink water. Instead, they have a unique ability to soak up water through their rubbery skin via a process called osmosis. If a frog’s skin dries out, it can be fatal, so a supply of fresh water must be available to your frog at all times.

Land-dwelling frogs will only need a shallow dish of water and a humid environment; aquatic frogs will require a much larger body of water to remain healthy.

And although they don’t drink it the way we do – it’s still equally important they obtain it.

But the process of osmosis does present a significant risk.

Frogs are very susceptible to toxin exposure, so offering the right type of water is essential!

Let us now take a closer look at frogs and their abilities regarding water.

We’ll also look at how you can and should be offering water if you do intend or currently keep them as pets!

How Do Frogs Drink Water?

Frogs need water, but they don’t drink it. Amphibians have a unique way of gaining water from the environment around them.

Instead of using their mouths for drinking, they have an area called a ‘drinking patch’ or ‘seat pouch’ situated on their stomach and on the underside of their thighs, which soaks up moisture from their environment.

So any captive frog must have access to a water dish that is wide enough for them to fully submerge their belly into.

The whole process works via osmosis which basically means that their skin is full of tiny holes which suck up water, oxygen, and salts.

Humans also perform osmosis, but it only occurs within our bodies, not from the outside in.

When fully submerged in the water, frogs only breathe through this process.

When out of the water, they use their lungs for breathing in the air.

This is similar to humans, although they do not have ribs or a diaphragm to help their chests expand.

Osmosis works on the theory of balance; a particular solvent moves through a permeable membrane (i.e., a frog’s skin) to dilute the fluid on the other side.

In simple terms, freshwater frogs maintain a body salt content that is much higher than the water around them; therefore, water is absorbed because the rule of osmosis states that both sides must be equally diluted – pretty cool, huh?

Amazingly, recent studies have shown that there are several species of frog capable of surviving in coastal brackish waters by reversing this technique.

Perhaps the most well-researched of these is the Crab-eating Frog from Southeast Asia, which can live in both freshwater and up to 75% seawater.

They can cope with the high salt levels by increasing urea levels in their body, which prevents water loss through the skin.

In addition to this, they have special glands that act as barriers to prevent additional salt from entering their bodies.

As impressive as this all sounds, there are downsides to having permeable skin because it can quickly soak up harmful pollutants from surrounding waters.

This is why it is so vital to ensure you give your frog access to ‘clean’ water.

Frogs need water to live and to survive. It plays a critical role in a range of bodily functions. Without sufficient water, they would quickly perish.

For captive frogs, providing water is just as important as a proper diet, temperature, and cage environment.

In the wild, frogs often frequent damp places such as marshes, swamps, streams, and ponds because they need a moist environment, plus these habitats are usually rife with tasty insects!

Frogs are also known to eat their shed skin to gain the nutrients and water that it holds.

Surprisingly, several species have evolved to survive in dry desert areas by holding on to their shed skin and wrapping it around themselves to create a cocoon. This helps to reduce water loss significantly.

However, most of these species are limited in when they can reproduce, as they need to wait until there is significant rainfall before they can lay their eggs.

You will notice that most frog species have somewhat slimy or rubbery skin; this is because they can secrete mucus, which helps them remain moist.

This mucoid coating also contains anti-fungal properties, which help protect the frog from many diseases.

Regardless of their adaptations, frogs must have access to moisture of some sort.

Aside from hydration, frogs rely on the water around them to be able to soak up extra oxygen, in addition to what they get from their lungs.

So, frogs can quickly suffocate if they dry out or if the water has low oxygen levels.

Scientists have discovered that frogs have a network of capillaries beneath their skin’s surface that transfer the oxygen that is absorbed to the circulatory system.

When they breathe through their skin, they also soak up carbon dioxide, which is carried back through the skin and then expelled.

How Much Water Do Frogs Need To Drink

As long as water is available, frogs are able to absorb as much as they need. A shallow water dish is suitable for most land-dwelling species because they are not particularly good swimmers. More aquatic species will obviously require a more substantial area of water.

Also, most frog species will appreciate their enclosure being sprayed regularly with a mister as they like a high level of humidity in their environment.

Specific levels may vary between species, so make sure you do your research.

It may also be a good idea to invest in a hygrometer so you can keep an eye on the humidity level.

These can be bought from most pet shops specializing in reptiles and often record temperature levels on the same device.

Equally, you can get amazing hygrometers off Amazon. This best-seller is particularly effective.

If you plan to raise frogs from tadpoles, then it is useful to understand their life cycle in terms of water needs.

Tadpoles cannot survive out of the water as their unique respiratory system works by soaking up oxygen through their gills, just like fish.

When legs start to grow, tadpoles store nutrients in their tails, making them entirely self-sustainable.

At least until their tail drops off and a little frog hops onto land for the first time!

You must offer tadpoles a land area to crawl out onto once they have legs, as they can become susceptible to drowning at this stage.

As they grow, depending on the species, you can then reduce the amount of water available and only offer a small shallow bowl of clean, fresh water for land-dwelling frogs.

Do make sure the water is warm but not hot, as frogs are cold-blooded animals, so they use their surrounding environment to help maintain their own body temperature.

Is Bottled Water Safe For Frogs?

Bottled water is considered to be the safest water for frogs as it does not contain chlorine. You can also use tap water if it has been poured and then left for 24-48 hours before offering, as the chlorine will evaporate.

Water should be replaced once daily at the minimum, and you should clean your frog’s water bowl regularly because dirty water can lead to illnesses and unnecessary stress for your frog.

When cleaning, do not use harmful chemicals as they can remain on the bowl and get soaked up through your frog’s skin.

There are reptile and safe amphibian chemicals out there; however, the best option is to use very hot water and a clean sponge where possible.

Aquatic frog setups should be treated the same way as a tropical fish tank, with 25% water changes once or twice a week.

Frogs don’t like sudden changes in their water, so little and often is best.

For substantial areas of water, a filter pump is required to help filter out dirt from the tank. The pump will also disturb the water surface, creating more oxygen.

It is a good idea to test your frogs’ water regularly for any traces of chemicals that can be harmful to them, like ammonia and nitrates.

Fish test kits can be easily purchased from most pet shops and on Amazon are simple to use.

Depending on where you live, you may also need to factor in the hardness of the water.

Very little research has been conducted on the effects of hard and soft water on frogs, and the findings appear to be complex.

Hard water is higher in minerals than soft water, so the general consensus is that hard water is best.

Although, hard water can also contain trace elements that could be harmful.

The best way to assess the correct water hardness level is to research a particular frog species and try to find out what type of water it frequents in the wild.

Then you can make a more informed decision on the best water to offer.

For the same reason, it best to avoid using distilled water as this would have been ‘purified,’ which basically removes all the beneficial minerals and salts from it.

This process can also affect the water’s PH balance.

A PH level of between 6.5 and 7.5 is considered safe for most frogs and can be tested using an aquarium test kit.

Rainwater is another possible option for your frog; however, you do need to ensure that it does not run over surfaces that have been treated with chemicals when it is collected.

The safest way is to construct a tarp and use it to funnel untainted rainwater into a container.

It may be tempting to collect water from your local pond or river to use for your frog, but this is not a good idea as it can be full of parasites and bacteria.

This all may sound rather complicated, but if you do your research, you can make sure your frog has the best environment possible.

There are a number of companies that have now developed safe amphibian products like AquaSafe and ReptileSafe, which remove harmful nitrates, chlorine, and ammonia from the water.

They also claim to add electrolytes and helpful ions into the water to make it even more beneficial.

Many owners consider these to be ‘must-have’ items for anyone who owns reptiles or amphibians.

Do make sure you read the labels carefully and follow the directions precisely to ensure you add the correct amount.