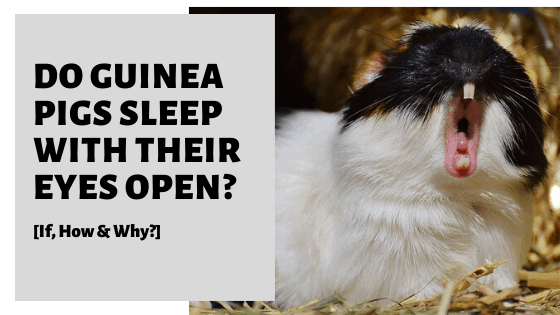 Owning a pet Guinea Pig is unique in many ways. Their sleep habits is just one area where they differ from other pets. It is rather interesting especially to new owners who are not aware of their behaviors and preferences. You may have even noticed your guinea pig sleeping with their eyes open; but why do they do this and is it normal? I spent some time researching to find out.

While it may look strange or be a cause for concern. From an evolutionary perspective; this behavior does actually make some sense. Its all about survival.

Thus, once your guinea pig can become confident that they are no longer in threat, and they are comfortable in your secure enclosure; it may naturally subside.

Let us now take a closer look at the sleeping habits of guinea pigs and exactly why those eyes may remain open. So, be sure to keep reading to get all the information you need.

Guinea Pigs are one of the most popular pets. They are friendly, relatively calm, and pretty low maintenance. As most people have their Guinea Pig habitats set up in cages or pens, it can be a little harder for us to monitor their behavior if we aren’t always with them.

While it is common for us to be able to watch them play and eat, many people have a hard time gauging if their Guinea Pig is actually asleep.

This can lead to many questions. First off, like a vast majority of other animals, they do sleep. It is important for them to get their rest so that they stay healthy and strong.

In some cases, it may not be so obvious that they are sleeping. Have you ever noticed your Guinea Pig lying rather anachronistically still?

This may very well be your little pet sneaking in some shuteye, even if their eyes were wide open. This is why:

Some Guinea Pigs sleep with their eyes open. This is a perfectly healthy behavior that may or may not change over time.

This is behavior more likely to appear in new pets or those you don’t handle very much. Understanding the history of Guinea Pigs can offer you a little explanation for their quirky sleeping habits.

Why Do Guinea Pigs Sleep With Their Eyes Open?

It can be funny to think of going out into the forest and seeing a little squeaking Guinea Pig foraging around in the woods. As most pet parents will tell you, they don’t come across as one of the most independent pets.

In reality, these rodents were domesticated thousands of years ago. While they do have some wild cousins, Guinea Pigs are no longer naturally found in the wild.

While the process of centuries of selective breeding has created an adorable social creature that craves human affection, we can’t expect their instincts to disappear entirely.

Like many other domesticated animals, they kept their instinctive alertness. Before they were gracing our homes and our hearts, they were prey animals that needed to be on the constant lookout for predators.

While they don’t need to worry about being snatched up by a Jaguar from your living room, they can’t shake history.

Sleeping with their eyes open is an evolutionary compromise to get the sleep they need without becoming such an easy snack.

When their eyes are open, it allows them to monitor what’s going on, even if they aren’t awake. This strategy is not unique to Guinea Pigs – but rodents in general.

Still, this is not to be mistaken for animals who never close their eyes when they sleep (like dolphins, fruit bats, and sea lions).

That being said, once the Guinea Pig feels comfortable in their environment, they will often start closing their eyes during their naps.

Like people, there are a lot of individual differences between Guinea Pigs. Some animals are just naturally more relaxed than others, and others will hold on to their paranoia no matter how much effort you put into making them feel safe.

While this is a sign of trust, sleeping with their eyes open doesn’t mean they dislike you. Try not to feel insulted if your Guinea Pig opts to sleep with their eyes open, it is just a reflection of prey status that is not hindering their ability to sleep throughout the day.

When Do Guinea Pigs Sleep?

Animals that fall under this category are active both day and night -specifically during twilight hours (dusk and dawn).

This is the same type of sleeping behavior exhibited in a wide variety of animals which are depending on humans for one thing or another, like house cats or barn owls.

Unlike their wide-eyed behavior, this is the result of domestication rather than evolution. Animals used to indoor conditions tend to dislike blinding sunlight or total darkness.

Guinea Pigs are especially vulnerable to overheating and sunburn and should never be left in direct sunlight.

This doesn’t mean that your animals’ activity is strictly limited to these hours, especially if your schedule doesn’t align with daylight.

While this isn’t the case for Guinea Pigs that have an outdoor enclosure, those that are indoors all day (especially in rooms with limited or no access to windows), your lights may be their indicator of “time.”

Most animals rely off of sunlight to determine their schedules. Your indoor pet may use the opening of curtains or the turning on of a lamp for reference.

As long as you have some kind of consistency and structure in your schedule, the Guinea Pigs will sync right up! You may already notice if you feed them the same time every day -they will learn to expect you.

With time, if they know you aren’t going to be around or are asleep for a certain amount of time, they will learn to seize this opportunity to sleep.

How Long Do Guinea Pigs Sleep For?

Considering how little sleep a Guinea Pig requires, it really doesn’t make a difference (although a little routine is always a good thing!)

In a 24 hour cycle, you can expect Guinea Pigs to sleep for around 4 hours total. Instead of doing this all at once, they achieve their sleep by napping for small increments throughout the day.

During the daylight, these increments are rather small. These little naps can last between two and ten minutes at a time.

Once the sun sets, this duration extends a bit, lasting up to about half an hour in one sleeping session.

Older Guinea Pigs may sleep longer for a number of reasons. Being older, they may be weaker and require more sleep to stay healthy. Some zoologists also suspect that because they feel more relaxed, they enjoy getting their extra sleep.

This bizarre sleep pattern can help explain why you may fail to notice your Guinea Pig ever resting.

Additionally, it may make it a little complicated for you to get your full eight hours. It is normal for Guinea Pigs to remain rather active while they are awake.

This means that they might be a little loud and rowdy for the other 20 hours of the day. Many people complain that they lose sleep over the late night activities of their lively pets.

Establishing a routine where they can learn when to expect attention or feedings can help reduce late night squeaking.

Be sure to top off their water before you go to bed, and give them enough attention during the day to prevent them from wreaking havoc out of boredom.

If all else fails, it is a good idea to keep them out of earshot while you are supposed to be sleeping. Keeping them in a different room or using earplugs could do the trick.

If you feel as though your Guinea Pig is acting lethargic and sleeping for longer periods at a time, take them to a veterinarian who specializes in small animals immediately. This could be a sign of a more serious problem.

Otherwise, if your Guinea Pig seems to be active and eating properly, don’t worry too much if you don’t notice them sleeping. It’s easy for us to miss.