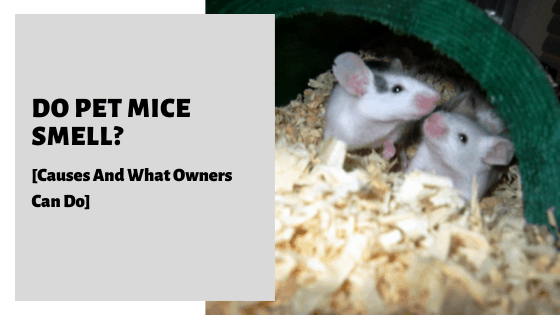 Mice can make great pets. They are generally considered to be low maintenance, but do require care and attention. Whilst pet mice are engaging and often sociable pets, some pet mice get some bad press for being a bit smelly. But is this reputation fair and is there any element of truth in it? I decided to do some research all around the topic. I would like to share my findings with you here today.

So, in answer to the question, do pet mice smell? Some pet mice smell. This is not to say that the odors from pet mice are totally overbearing, just that mice can be smellier than other pets, like hamsters and gerbils for example. There are certain things that may contribute to the amount pet mice smell, like the gender of the mice, their need to mark their territory and the size and structure owners choose for their cage.

One of the reasons that mice have got a reputation as a bit of a smelly pet is down to the fact that mice are sociable by nature and communicate with one another through scent. It is typical for male mice to smell more than their female counterparts, owing to their need to scent mark their territory.

If you are concerned about your pet mice smelling, then it is recommended to opt for female mice rather than males. Female mice are typically considered to smell less because the scent mark less than males. A male mouse uses scent marking to mark their territory and also to assert dominance over females and other male mice.

Mice, like humans, often have their own unique smell. How smelly your mice are truly depends on a number of different factors, gender included.  Don’t let the risk of them smelling put you off getting one as a pet.

As a pet mouse owner, there are lots of different things you can do to minimise the smells produced by your pet mice.

Let us now take a look at some of the most commonly asked questions including the reasons why mice can smell and how to effectively minimize or eliminate them entirely. So, be sure to read to the end so you know exactly what to do and exactly how to take care of any odors.

Do Mice Have An Odor?

Mice, like dogs and other animals, mark their territory; they use scent to mark their enclosure. The scent used by mice is often quite pungent and their odours often cannot be masked by air freshener alone.

Mice have quite a strong odor and because their enclosures are usually inside the home, you may find that smell can be a little overwhelming. However, there are several different things that owners can do to get rid of the odor produced by their pet mice.

To minimize your pet mice’s odors, some of what is suggested is quite counter-intuitive. For example, if you want your mice to smell less, you might be tempted to clean their cage out very regularly.

Usually this is the solution. However, where mice are concerned, it could be that they are so smelly, because their owner is cleaning them out too often.

The enclosure you provide for your mouse is their home. It’s their territory, and mice are very protective over their space. To ensure that everyone knows that their cage belongs to them, your mouse will get busy with their scent glands to mark their territory.

So, if you are thinking that cleaning out your mouse more frequently will subdue their odor, it is in fact the opposite. A freshly cleaned cage, whilst that may sound appealing to you, is likely to be scent marked by your mouse immediately after they are returned to their enclosure.

If a mouse cannot smell themselves in their cage because it is so wonderfully clean, it is highly likely that they will go the extra mile with their scent marking too, meaning that the odor will be stronger and more pungent than it was to begin with.

Your best bet for reducing mouse made odors is to leave the cage for a week or even two weeks between cleans. We would recommend also saving some of the used bedding and shavings to sprinkle round your mouse’s cage once freshly cleaned.

This will provide familiar scent for your mouse and lessen the need for them to go to town on the scent marking as their territory remains theirs.

Why Do My Pet Mice Smell?

Pet mice do have a tendency to be quite smelly pets. This is due to the fact that they communicate with each other through scent. Mice have an excellent sense of smell and a territorial. These attributes combined make for these adorable little creatures to be quite smelly indeed.

Regardless if you keep your pet mouse in an enclosure on their own, or if you have multiple mice in together: the fact of the matter is they are likely to smell.

A mouse on their own is likely to scent mark their cage and become very territorial of this space. Mice that live alone are also likely to be a little stressed, so make sure you are interacting with your mouse regularly if this is the case.

Mice that live together are likely to scent mark their favorite areas of their enclosure and you scent to establish dominance.

Male mice are typically smellier than their female counterparts. If you are thinking of getting more than one mouse that is also something to consider. So, female pairings often work best. Male- female pairings of mice are highly likely to lead to breeding – so also be aware of that as a perspective owner.

We would recommend choosing a cage with bars that are quite close together (to prevent any escape attempts). The bars will allow for fresh air to pass through meaning that your mice have a well-ventilated home.

The size of the enclosure you provide for your mice also may be a contributing factor on the amount they smell. Your mice are likely to scent mark only certain areas of their home. So, if their home is too small the smell is likely to be more concentrated and therefore more pungent.

Ensuring your mice have enough space is key. We would recommend an enclosure for your mice that has multiple levels that they can play on and a decent size space for them to feel safe and secure whilst sleeping.

A cage that is a mix of both glass/plastic and bars is preferable for your pet mouse. The glass will allow for your mouse to be safe and secure and can prevent them from escaping, whilst the bars provide excellent ventilation meaning that the smell from your mice is diluted.

This Ferplast 60 Karat cage available from Amazon is a great combination of both glass and bars and would make an amazing home for any pet mouse.

How Do You Keep Pet Mice From Smelling?

Providing a decent size cage and cleaning them our infrequently (once every 1-2 weeks) is a great way of stopping your mice from smelling. But there are some other solutions you could also try to keep unpleasant odors at bay.

Some owners use baking soda to absorb some of the smells caused by pet mice. The benefit of using baking soda is that it is not harmful to your mice. Simply sprinkle a little under their bedding and any other problem areas of the enclosure. Be sure to cover the baking soda in the bedding though.

Corncob bedding is safe for mice and provides another great way of keeping your mice from smelling. Corn cob bedding reduces the level of ammonia (the substance that causes urine to smell) and is super absorbent. This Sunseed Natural Corn Cob bedding is available on Amazon for a great price.

Making sure that your pet mice have deep enough bedding is also important as this can be absorbent too. Using corn cob bedding and something that your mice can nest in to sleep is a great way to keep smells at bay.

Mice are sociable, cute and engaging pets. They can be a little smelly owing to the fact that they are territorial animals and scent mark their homes.

Owners can reduce the odors produced by their pet mice by:

Mice are very rewarding pets to have, so don’t let the potential risk of them being a little smelly put you off. There are so many things owners can do to reduce the smell of a pet mouse.