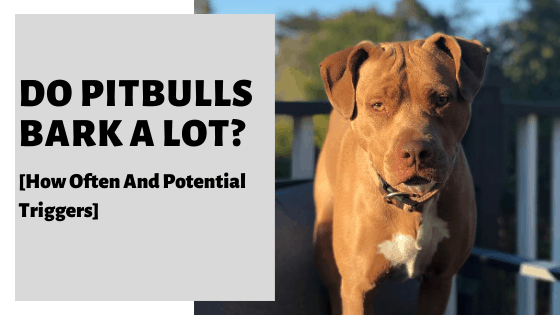 Are you looking to get a Pitbull for yourself or your family? One of the things that you may be wondering is how much Pitbulls bark. All breeds of dogs (except for the Basenji) bark at some point, but what is normal and what is considered excessive for the Pitbull? I decided to spend time researching the breed and talking to my friends who own both a male and a female. I will be sharing my findings here with you today.

So, do Pitbulls bark a lot? The Pitbull breed is considered to be a moderate barker. They generally do not bark without reason, so you can expect barking from this breed occasionally. Pitbulls are more likely to bark when feeling protective, bored, when provoked, scared, excited, feel threatened or something unexpected happens. Of course, each Pitbull is different with their own unique personality. Equally genetics, age, and how they are raised all play a role in how vocal a Pitbull will be.

Some Pitbulls can be more vocal than others; some are largely silent. This is the case with most breeds of dog. We must remember that each dog is different.

Nevertheless, if you live in an apartment building or a house with close neighbors, incessant barking just won’t do.

You need to know what can happen, and what the average Pitbull is like.

There are many people who chose their next breed based on barking alone, so read on to find out all you need to know about the barking habits of this dog.

Pitbulls do bark, but they are not as quick to bark as many other breeds and are in fact considered to be moderate barkers.

A Pitbull will certainly bark if they believe they have a reason to. Although they are not the type to bark all day long for nothing, there are exceptions to every rule.

Keep in mind that since dogs are unable to speak, barking is the way they communicate, both with their humans and with other animals.

Being one of the most intelligent dogs out there, a Pitbull will not generally bark for no reason.

Simply because they are so smart and easy to train, you can train your Pitbull not to bark and it is the well-trained pets that are quieter than those with no formal training.

Those who have not been trained can actually bark a LOT.

My closest friend has two Pitbulls – a male and a female. According to them, the female has never barked once in her life (the odd howling musical does occasionally make an appearance!) and the male barks only when excited to see our friends return home, or if someone knocks at the door.

Let’s just say that Pitbulls are very vocal dogs and they have their own way of talking, especially when playing.

They also have different types of barks, depending on the situation. Some of them can be quite high-pitched

When Are Pitbulls Likely To Bark?

There are basically eleven main situations when you can expect your Pitbull to bark. Any direct action or sound, especially sirens, can set off your Pitbull.

Like every other type of dog, Pitbulls come in varying sizes and shapes, so their innate tendency to bark could be very different from the neighbor’s pet down the block.

So, do not be surprised if your Pitbull barks at something not listed below!

When Pitbull’s love, they love with every fibre of their being. There is nothing more important to them than protecting the humans that they adore.

If they feel that you are being threatened, there is nothing they will not do, and barking is a given.

All dogs use barking to intimidate a predator, whether it be human or animal, and a Pitbull is no different. Barking is their first line of defense.

Pitbulls have the tendency to get themselves into mischief when they are bored, and some of them bark just to hear the sound of their own voice.

It is critical that your pet has plenty of things to keep them occupied if you are not able to be at their beck and call.

A Pitbull who is being teased or harassed will react the same as any other dog – they will bark, and it will be loud.

Whether their intention is to get you to come to the rescue, or to simply get the irritant to leave them alone, no one knows.

For a dog with a reputation for being tough and mean (wholly undeserved by the way) all it takes is a little thunderstorm to reduce them to trembling masses of shaking and barking fur.

Our friends Pitbulls go nuts when there are storms and get as close to their owners as soon as possible.

To help alleviate their fear when they are not home, they tend to leave a radio playing loudly so they are unable to hear any thunder if it occurs.

This is similar to the above and follows on. Just like humans are startled when they hear a loud noise, so are most dogs and your baby will likely not be any different.

They will generally stop barking once the sound goes away without any urging from you. They are also extremely sensitive to bright flashes, especially when accompanied by a loud noise.

This type of barking occurs when your Pitbull is happy and excited.

For example, you may find that your pet starts to bark the moment you throw a ball. Or they will go ballistic when you walk through the door.

Most Pitbulls will bark when they see someone walk by the house.

This is a natural reaction from most dogs who believe that someone is coming a bit too close to their domain and they stop barking as soon as the person is out of sight.

Knock On The Door

You can train all you want but this is a hard one to get any Pitbull to stop doing.

When someone has the nerve to knock at the door, the loud noise gets them going, as does the thought that either you or they may be in danger.

For guests that have never met your dog and who have stopped by to visit, you can expect a bark.

They sense your acceptance of the visitor and go right off into the excitement stratosphere.

Pitbulls can feel threatened by many things, including aggressive dogs, loud voices, someone going near their food, and any type of violence.

Expect them to voice their displeasure loudly and promptly remove them from the situation.

All of the above reasons for barking (except food-aggressive barking) are considered to be acceptable in those circumstances for all breeds of dogs, not just Pitbulls.

Keep in mind that with a happy, healthy, and obedience trained Pitbull, they do not just normally bark for no reason.

Being an emotional and sensitive breed, their barking is always a reaction. If your pet will not stop barking, assume that there is something wrong!

How Do I Get My Pitbull To Stop Barking?

There are several ways that you may utilize in order to get your pet to stop barking.

Let us look at some of the most common ways to prevent, and minimize it to begin with:

One of the main ways to get your Pitbull to stop barking is by making sure they are well socialized right from the beginning – and from an early age if possible.

They should be put into social situations with both people and other pets from the time you bring them home as a pup. This will help to keep them calm when they encounter new people or animals later in life.

Training is a must and not just because it can help with barking. Pitbulls are strong, muscular dogs, and it is irresponsible to have a dog that you cannot control.

Never Leave For Too Long

While it may sound silly, many Pitbulls suffer from separation anxiety when they are left alone. They hate to be away from you, and they will often bark in an effort to get you to come back.

If pet sitters are not an option, make sure that they have plenty to keep them occupied when you are not around. When left to their own devices they can bark just because they literally have nothing better to do.

If your Pitbull is barking for a reason that you find unacceptable, you will be best to ignore them.

Once they have settled down, then give them plenty of love and praise so they associate barking cessation with a reward.

One of the easiest ways to train your Pitbull not to bark is by teaching them to bark. When your pet barks, tell them to “speak” and provide a treat.

They will quickly understand that if they bark when they are not told to speak that they will get no type of prize. Pitbulls want nothing more than to please their humans – they intensely crave your attention.

This makes them uniquely suited to training. All you need is a little bit of time and patience.

Overall, Pitbulls bark what could be termed a reasonable amount, certainly far less than other types of terriers. They usually only do so for a reason; to communicate something with their owners.

As big dogs, Pitbulls do have a big bark. That is something to definitely consider depending on where you live.

Remember that all dogs are different and do have their own unique personalities. You will never be able to know 100% for sure that your dog will not bark; and it is natural to all breeds to some extent.

If you do get a Pitbull and they are a barker, thankfully there are some proactive and practical things to do to keep the noise down.

Keeping them busy, active, well exercised and stimulated are excellent approaches, as are early socialization and training.

In doing so, you shouldn’t have to worry about your Pitbull barking unnecessarily and it should never be a too common or regular occurrence.