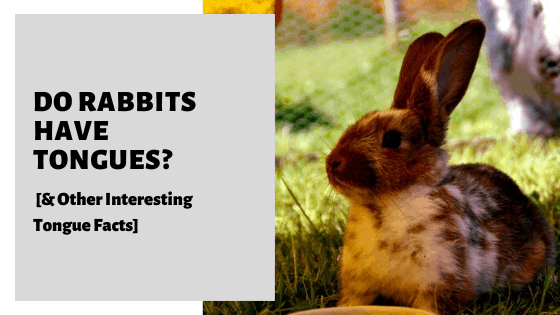 If you have never seen a rabbit’s tongue, it is only natural to question whether or not this is something they have. Besides, not all animals have tongues. I decided to conduct some research into the topic. I would like to share this with you here today.

Let us now take a closer look at what rabbits use their tongues for as well as other interesting insights like why you may see a rabbit sticking out their tongue!

What Do Rabbits Use Their Tongues For?

Rabbits have small pink and naturally warm tongues that they use frequently for various different purposes.

Firstly, they use their tongue to eat.

Rabbits are similar to humans in the sense that they also produce their own saliva on their tongues.

This begins the process of digestion, where any food consumed (mostly hay and pellets) starts to be broken down.

Secondly, rabbit will use their tongues to drink.

The tongue enables the rabbit to drink enough water without swallowing too much air and suffering from gas and bloating.

The tongue is also used by some rabbits to collect water (from a bowl) or to release the non-drip mechanism that you often find on water bottles.

The tongue is also used by rabbits to groom themselves as well as other rabbits in the colony/herd.

Rabbits that live together or group together will also groom each other.

If rabbits are in pairs, then usually the more dominant rabbit will receive the grooming. In other pairs, rabbits are known to take turn.

It depends entirely on the temperaments and the dominance hierarchy that is in place. This is most often observed in wild rabbits.

For this reason, it is very important that you consider what products you put onto your rabbit.

Be sure to refrain from using human products that can contain harsh chemicals.

Rabbits will automatically ingest these chemicals as part of the grooming process and this can cause burns to their tongue and other health issues.

Finally, rabbits use their tongues to show affection to their owners. They can do this in two ways; licking and sticking their tongue out.

When you pet a rabbit, if they like the attention they are receiving they will often let the person know by licking their hands and or clothes.

This is a positive sign and means that they are enjoying the experience.

Why Do Rabbits Stick Out Their Tongue?

Rabbits stick out their tongue as a way of showing affection, and as a general sense of well-being. There are a lot of pictures online of rabbits sticking their tongues out with various faces and expressions. Its actually very amusing.

Sticking the tongue out is a visual representation of your rabbit expressing themselves. It is important to observe when your rabbit is doing this, for how long and to look out for other behaviors and signs of their mood and well-being.

You will most find that they do this when they are happy or comfortable/content in their current surroundings.

However, all rabbits have their own unique ways and behaviors, so this is definitely something to monitor.

Also consider that not all rabbits will stick their tongue out, even after they have trust in you as their owner and are comfortable in their surroundings.

For others, this behavior will only come in time when they are comfortable enough to do so. Frequency will of course, vary from rabbit to rabbit.

Not only do rabbits stick out their tongues, but they also like to communicate vocally on occasion.

Rabbits are able to use a variety of tones, like humming, to send messages to other rabbits. For example, low hums during petting is considered a sign of affection.

Do Rabbits Have Rough Tongues?

Yes rabbits do have rough tongues. This is due to papillae, which are abundant within and across a rabbits tongue.

This research by the Department of Animal Anatomy used scanning electron microscope techniques to examine the structure of the rabbits tongue.

They found Fungiform Papillae which are essentially the small club-like structures that are red in color.

In humans, this is where taste buds generally lie. Conclusions from the study indicate that taste buds in rabbits are likely stored here too.

It is these structures and taste buds, that rabbits are able to effectively taste sweet, sour, bitter and salt.

As rabbits can naturally regulate their salt intake, it is likely that these taste buds play a role within this mechanism.

Why Do Rabbits Lick Their Lips?

Some rabbit owners report that their rabbits will lick their lips. This is actually fairly typical behavior and they generally do this following grooming or expressing pleasure at being groomed.

They are also likely to do this following drinking water or eating, at an attempt to remove any excess that initially missed their small mouths.

Again, for the most part, it is usually a positive sign and some rabbits will lick their lips more than others.

Rabbits have tongues and they use them in a variety of ways for a number of different purposes, mostly: drinking, eating, grooming and expressing themselves.

One of the most amusing and interesting behaviors that rabbits demonstrate is sticking their tongue out. Watch out for it,