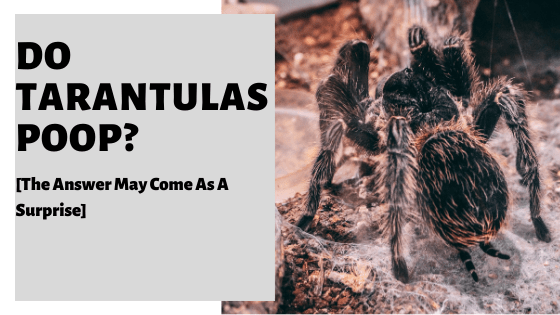 Tarantulas are an amazing species of spider; without doubt, being the one to keep as a pet. But one interesting aspect of their care that owners tend to ask, is whether or not they poop. Besides, it’s certainly hard to imagine! As intrigued as you are, I spent some time researching to find out for good!

So, do tarantulas poop? Tarantulas do poop and commonly do so in the corner of their terrariums or enclosures. Tarantula poop is typically white in color, and relatively wet in consistency until it drys. The amount a tarantula poops will depend on how much they eat, their age, size and the temperature they are kept it.

There are many reports from owners observing their tarantula head to the corner of their enclosure, to squat down and go.

It may seem bizarre, especially to new owners who see it for the first time, but it’s an entirely normal process!

Let us now take a closer look at how these arachnids defecate before moving onto what it looks like – so you know exactly what to expect if you do ever decide on keeping one!

How Do Tarantulas Defecate?

Tarantulas have a pretty interesting digestive system, and are known to poop and wee at the same time!

And the process all starts via the mouth; all food they take in must be in liquid form. They can only suck.

So, any prey must be crushed and predigested; and this all happens via digestive juices they put onto their prey.

Once the food is in a safe and digestible form, it’s ingested by the tarantula.

The main digestive organ of a tarantula is its stomach; which is actually a tube that runs the length of its body.

The stomach actually has a sucking mechanism that helps to liquify their prey and send food to the intestines!

The food is then broken down in the intestines and passes into the bloodstream to support bodily functions.

The rest, and leftovers, then becomes the poop!

Waste in tarantulas is formed into a small ball, which is later deposited, often in the corner of the enclosure.

And it gets a little more complex, still.

Spiders do produce urine as such, but instead, produce uric acid; which is almost solid in consistency. This enables them to retain as much water as possible, without losing too much throughout the process.

This acid is then combined with the solid waste referenced above in the digestive tract, and is then expelled at the same time!

So, spiders, like birds, actually release feces (poop) and urine (wee) together, both out of the same opening.

So, you’ll definitely want to stand back!

What Color Is Tarantula Poop?

Tarantula poop is white in color, and can often be seen in a somewhat liquid yet ball shape form where it has been deposited.

Tarantula poop is often likened to bird poop in color and consistency.

One thing to be aware of is that tarantulas will not poop any dark-colored matter. So, if you do notice a dark-colored piece, it could very well be a small piece of substrate that has been collected up.

Where Do Tarantulas Poop?

Thankfully, for the most part, tarantulas are relatively tidy by nature, and will actively designate a certain spot to do their duties.

At the same time, they may limit it to one of their walls, and will look to return each time they need to go.

Although, it has been reported that some tarantulas somewhat spray, and this can lead to some unavoidable mess.

Nevertheless, this area will likely be the furthest point away from any hiding spots and burrows. They want to keep this as far away as possible.

Who can blame them!

Despite what appears to be good hygiene and sanitary practice in these spiders, there does appear to be one outlier.

Some tarantulas have been known to defecate there.

An owner will soon notice when their tarantula is pooping in this spot, as it will change consistency in the water itself. And against the contrast of the dish will likely be quite noticeable; as small white stones.

Lastly, it has been known for tarantulas to poop in their owners hand.

However, it has been hypothesized that it is more likely in species that use pooping as a self-defensive mechanism; such as in Avculuria species.

Rose hair tarantulas do not appear to be as likely to poop in the hands of their owners, but it does and can happened.

Should Tarantula Poop Be Cleaned Up?

It is generally good practice and husbandry to pick up any solid tarantula poop when you see it and not to leave it for too long. Although, as tarantula poop dries and the moisture evaporates, it should not pose any major risks.

The need to clean up tarantula poop is also more likely with tarantulas that poop on the side of their enclosure, or where poop has reduced the visibility inside or the aesthetics of the tank itself.

It all comes down to preference and circumstance, generally.

One other potential consideration is how long a tarantula is to be homed in its current enclosure.

Is it a forever home or is the tarantula still young and going to be moved to a larger enclosure shortly in time?

In this instance, it may be best to refrain from a deep clean and simply wait to the re-housing.

Nevertheless, most tarantula owners will typically spot clean their enclosures of any poop solids or dead insects when the mess becomes clearly noticeable.

Deeper cleaners are a different matter, however.

Some owners will thoroughly clean out their T’s enclosure and replace the substrate every 6 months to a year.

But one thing to be aware of is that changing substrate will likely stress your tarantula.

Spiders dedicate a lot of time and resources to making their home comfortable – this includes the substrate.

So changing substrate out too regularly does not come advised.

In fact, more experienced keepers may not change their substrate for years for this reason.

But back to the cleaning of poop.

To clean poop off an enclosure is relatively straightforward. Although, should be done carefully with the right approach and materials.

Besides, a lot of owners will do their maintenance early in the morning, and times when their T’s are less active, likely to bolt or get defensive.

In regards to materials, an old flannel to wipe the glass typically will typically suffice.

Otherwise a tissue that has been dampened in water is commonly used, as is a clean and unused paint brush.

A bit of scrubbing may be required.

Generally, glass enclosures are better than those made of plastic, with the latter being more likely to scratch during such maintence.

Thus, depending on the material of the enclosure, depends on how careful you need to be.

Tarantulas do poop, although how much they do depends mostly on their age, size, and the amount of food they have eaten.

Generally, a tarantula will poop once every 24 hours and will look to do so during the nighttime.

While it may reduce visibility inside the enclosure somewhat, their poop does not really appear to bother them.

Spot cleaning can be helpful, but deeper, thorough cleans should not be undertaken often.

Besides, these tarantulas are very clean and they are particular with when and where they go.

Returning to the same spot to poop has its advantages, after all.