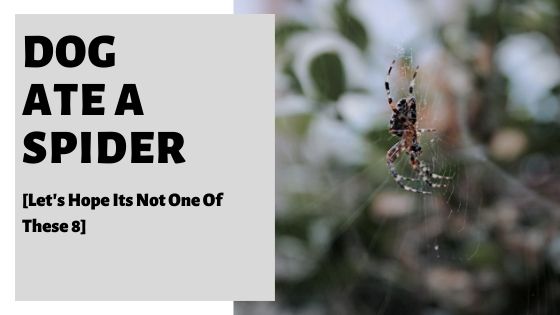 Your dog ate a spider. Panic sets in. Are they going to be okay? What about poisonous spiders? How should you now respond to the incident? Well, here’s everything you’ll need to know and consider.

So, what should you do if your dog ate a spider? If your dog has eaten a spider, there’s nothing you need to worry about or do, most of the time. The exception is if the spider has bitten your dog, especially in his mouth or they are a particularly poisonous species. Monitor your dog carefully for any warning signs of poisoning, in which case you’ll need to take your dog to the vet.

It’s very much dependent on the spider, you see.

Are we talking about a common house spider?

Well, in those cases, your dog should be fine.

Should being the important word because they may not always. Besides, there is always a chance a spider could be carrying something or have landed on something that really isn’t good for your dog.

But chances are you’re not going to know what type of spider your dog has eaten, either.

This is why close monitoring of your dog for the next 4-48 hours is going to be key.

But before we take a look at those spiders you should be concerned with, let’s first look at why your dog would want to eat an arachnid in the first place!

Why Do Dogs Eat Spiders?

Dogs eat spiders for various reasons, mostly because they move, they’re visually interesting, and they give off an odor that our dogs can pick up.

Dogs love to explore anything that moves, so spiders and other insects can seem interesting to them to investigate.

It could be that your dog is checking out the spider’s web and winds up swallowing the spider by accident.

Sometimes your dog will want to play with a spider, as it looks like a fun toy.

Dogs see shades of red and green as types of gray, so they don’t notice the green of grass and leaves as we do.

However, dogs can see shades of blues and yellows: spiders often have patches of these colors.

For a dog, a spider can appear as a splash of moving color that excites his curiosity.

Spiders Give Off An Odor

Unlike us, dogs can smell spiders.

Spiders give off a subtle scent that dogs can pick up due to their 300 million smell receptors.

Sometimes a dog will make you aware of a spider’s presence long before you see anything.

Dogs may point or run in the direction of a spider. It’s natural for a dog to want to check out what he smells.

If you see your dog stiffening his tail or ears, or with his tail pointing up and his nose facing a particular way, chances are he’s smelled something.

It could be anything, but if it’s a spider, he may well want to go and play with it or investigate it with his mouth.

Are Spiders Poisonous For Dogs?

Generally speaking, most spiders are not poisonous to dogs. There are, however, some spiders that are harmful to dogs. The female black widow, the brown recluse spider, and the hobo spider are the most dangerous spiders for dogs (and cats).

What Spiders Are Harmful To Dogs?

The most common spiders harmful to dogs are the female black widow, the brown recluse spider, and the hobo spider.

The female black widow spider, found throughout the US, is poisonous to dogs as well as cats because of her large fangs.

The females are shiny and black, with red or orange markings on their bellies that resemble an hour glass. They are just under one inch long (2 to 2.5 cm).

The males aren’t poisonous – they don’t have the colored markings and are usually black or brown.

If bitten by a female black widow spider, dogs can suffer any of the following:

If you get your dog to the vet in time, they will usually treat your dog with any of these:

This spider is brown and is less than a third of an inch long (between 8 and 13 mm), with long legs.

Its upper body is shaped a bit like a violin. Brown recluse spiders are typically found in the southern United States.

The venom is very dangerous as it is a mixture of proteases and phospholipases, which can cause quite serious tissue damage at the bite site.

The bite wound will be slow to heal because of the tissue damage, leading to possible secondary infections such as gangrene.

Regardless of whether your dog eats the spider or is bitten, the venom enters your dog’s bloodstream and can destroy red blood cells and vital organs.

If your dog has been bitten by a brown recluse spider, or if he’s ingested the venom, symptoms can include:

There is no anti-venom available. Immediate veterinary attention is required.

The hobo spider, also known as the funnel weaver or aggressive house spider, is highly poisonous to dogs.

These spiders are common in the Pacific Northwest region of the United States. They are large and brown, with a V shape on their abdomen.

If your dog eats a hobo spider, he is likely to get bitten on the inside of his mouth or on his tongue.

A hobo spider bite is initially painless, but blisters develop over the next day and a half.

The blisters then rupture and form craters.

The tissue around the blisters dies, causing toxicosis. The wounds are slow to heal, as with the brown recluse spider.

Other Spiders that Are Poisonous To Dogs

Some other spiders that are highly poisonous to dogs include:

If your dog is fond of eating insects, you may want to check your local area to see what spiders to watch out for.

Signs Your Dog Could Be Poisoned

If your dog gets his mouth anywhere near a poisonous spider or chews it up and swallows it, he is very likely to get bitten in the process.

Here’s what to watch out for if your dog has eaten a spider that’s venomous:

Can My Dog Get Sick from Eating A Dead Spider?

Most of the time, your dog won’t come to any harm from eating a dead spider. The times to be concerned are if he’s eaten a highly poisonous spider or if the spider was killed using high levels of insecticide.

Because a dead spider can’t bite your dog on the way into his stomach, usually, your dog won’t get sick.

However, you’ll want to keep an eye on your dog in case he has a bad reaction.

If your dog eats the dead body of a highly venomous spider, you will need to take him to the vet right away.

Even if these spiders don’t bite your dog, their venom is so dangerous that your dog’s stomach acid won’t be enough to counteract its harmful effects.

Most pesticides that you can buy over the counter won’t harm pets. If, however, your dog has a reaction after eating a dead spider, it could be the pesticide.

Symptoms to look out for include:

Your dog will try to get the toxins out of his system as best he can. Keep him hydrated, and check with your vet if you have any doubts as to your dog’s well-being.

What To Do If Your Dog Eats A Spider

If you are in any doubt as to what kind of spider your dog has eaten, contact your vet right away. Most of the time, the average spider is digested by your dog without any problems, but it’s best to be safe if you don’t know what he’s eaten.

What You Should Do At Home

If you think your dog hasn’t eaten one of the highly poisonous spiders mentioned above, keep an eye on your dog for the next few hours.

Most of the time, your dog’s stomach acid will dilute venom from less poisonous spiders.

Make sure your dog shows no signs of a bad reaction, and call your vet if you have any doubts.

Spider bites can take a few days to appear, so remain vigilant until you’re sure your dog is safe.

Your vet can tell you what various symptoms might mean and how long you should monitor your dog before potentially bringing him in for treatment.

If you suspect your dog has eaten or been bitten by a venomous spider, contact your vet urgently. You can also call the Pet Poison Helpline at 1-800-213-6680.

What The Vet Will Usually Do

Your vet will usually carry out various procedures, depending on what your dog needs:

The Prognosis For Spider Bites

The sooner you get your dog to the vet, the better his chances of a full recovery.

Your dog’s prognosis will also depend on the kind of spider he has eaten.

Once your dog comes home after treatment, you’ll want to keep an eye on the bite site (if you can see it) as well as your dog’s overall behavior.

Your vet will inform you what to do for any post-treatment care.

How your dog is going to respond is largely dependent on the spider.

And unless you are an arachnid expert, chances are you’re not going to know which spiders are poisonous and which ones are not.

You might not even know which ones are in your area!

And beyond that, dogs eat things quickly, you might not have even seen the colors, size, or features of the spider you ate.

So, unless that’s the case, you are going to need to monitor your dog very closely over the next few hours. Any changes for the worse, get on the phone to a vet.

If in doubt, do so right away!