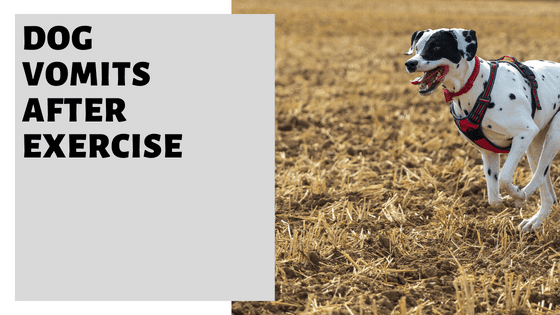 If your dog is vomiting after he’s exercised, you are probably wondering what to do. Is it normal for dogs to do this? What about after running, specifically? When should you worry, and what should you do? Here’s everything you’ll need to know about it.

So, why does a dog vomit after exercise? A dog may vomit after exercise if he eats his food too fast or consumes too much beforehand. Other times it may be the heat or dehydration that’s the problem. Some dogs suffer from exhaustion because they’ve done too much, so they can’t keep their food down.

As you can see, a simple change in routine can help to overcome this and to stop it from happening going forward.

But before we look at the specifics of your response, let’s delve deeper into the reasons why vomiting occurs after exercise.

Why Does A Dog Vomit After Exercise?

Dogs vomit after exercise either because they’ve exercised too soon after eating, they’re hot, or they’re suffering from dehydration or exhaustion.

Eating Too Fast or Too Much Before Exercise

If your dog has eaten too fast or too much, chances are he won’t be able to digest his food properly.

If he then goes out for exercise, the undigested food will be hurdling around his stomach.

Some vets recommend dogs not exercise within 2 hours after eating. This includes:

Doing exercise with undigested food can cause the stomach to produce more acid to try and break down the food, leading to acid reflux.

In dogs, acid reflux is a serious problem.

Playing after eating can also cause Gastric Dilatation and Volvulus (GDV), otherwise known as bloat.

Your dog’s stomach can twist, preventing gas from leaving the stomach, stopping blood flow to other organs, and causing breathing problems.

GDV can be fatal if it isn’t treated quickly.

Getting Too Hot or Dehydrated

If your dog has gotten too hot, chances are he’s becoming dehydrated.

Not getting enough water while exercising can make your dog nauseous or breathless, which can result in vomiting later on.

If Your Dog Gets Too Hot

Overheated dogs can die – either from heat stroke or cardiac arrhythmias – so detection and action are essential.

Signs your dog is overheated are:

Note: Most dogs are unlikely to stop their activity when they get dangerously overheated, especially hunting breeds.

If you think your dog is vomiting from getting too hot, wet him with cool water, especially on his ears, groin, and paw pads.

Call your vet – depending on the severity of the overheating, your dog may require seizure control, a breathing tube, and artificial ventilation (done in the hospital).

If Your Dog Gets Dehydrated

Dehydration can be fatal in dogs – without enough water, your dog loses electrolytes that contain essential minerals for health (including potassium, chloride, and sodium). Organ failure can result.

Signs of dehydration in your dog include:

Depending on the severity, dehydration can necessitate hospitalization for fluids to be administered via IV.

If your dog is exhausted and his system has put in more effort than he can handle, he may vomit up his food after exercise.

In addition to the vomiting, your dog can become stressed about the activity if he knows he’ll throw up afterward.

Exhaustion can lead to the more severe problems of overheating and dehydration, both of which can require urgent medical attention to save your dog’s life (see above).

Is It Normal For Dogs To Throw Up After Running?

It’s normal for some dogs to throw up after running, but not for all dogs.

Some dogs will run around, drink some water, and then throw up.

Such vomiting can be nothing to worry about as long as it doesn’t happen every time, or it doesn’t affect your dog’s breathing.

Here are normal types of vomiting that are usually nothing to be concerned about.

Some may happen after running or other types of exercise:

As long as your dog doesn’t appear to be in distress and isn’t doing this repeatedly, these types of vomiting are not a cause for concern.

When Should I Worry About My Dog Vomiting After Exercise?

There are times when you need to act quickly if your dog is vomiting after exercise – such as other adverse symptoms arising at the same time.

If you see any of the following other symptoms when your dog vomits (whether it’s after exercise or not), call your vet right away:

If you have any doubt as to whether your dog’s vomiting after exercise is normal or not, call your vet anyway.

It’s better to seek reassurance than ignore a potential problem.

What To Do About Your Dog Vomiting After Exercise

What to do about your dog vomiting after exercise depends on the cause. If you know what’s happening, there are several things you can do to help your dog not vomit so much.

If Your Dog Eats Too Fast or Too Much

If your dog has been eating too fast or too much, the solution is to help him slow down while he eats. Here are some ways to do that:

In addition to the above, when you go out for exercise after your dog has eaten, let him warm up slowly with a gentle walk to start.

Dogs should only engage in high-energy activities 2 hours after eating.

Read more: Can I Walk My Dog 30 Minutes After Eating?

Dogs will get excited at the thought of playing and won’t think to rest to digest first!

It’s also worth knowing that wet food is easier to digest than dry food, so consider giving your dog more wet food if he overeats.

If Your Dog Gets Too Hot or Dehydrated

Make sure your dog has access to water while he’s exercising.

If you are going out and you don’t know if there will be a water source nearby, bring water with you and let your dog stop every 15 minutes for a water break.

Be mindful of the weather – save exercise time for cooler times of the day.

People who live in warm climates tend to exercise their dogs early in the morning and in the evening, when the weather is cooler.

If Your Dog Seems Exhausted

If you suspect your dog is vomiting after exercise out of exhaustion, consider whether he’s doing too much activity.

While some dogs don’t get enough exercise, others can get too much.

The best way to know if your dog is too exhausted from exercise is to:

Some breeds that aren’t as suitable for strenuous types of exercise are:

These dogs tend to do well with low-impact forms of exercise, followed by chill-out time on the sofa or on your lap.

If your dog doesn’t do well with strenuous activities, in addition to walking, you can try:

The following breeds are not only more apt to enjoy strenuous exercise, but they need it on a daily basis:

If your dog is one of the above breeds and he seems exhausted after exercise, speak to your vet, as there is most likely another problem going on.

If Your Dog Isn’t Digesting His Food Effectively

You can also provide your dog with digestive food supplements, ideally ones that contain probiotics.

Probiotics help the digestion process and are additionally useful to assist dogs in absorbing more essential nutrients from their food.

You can also get multivitamins that contain organic fiber (vegetable starch and vegetable fiber). A good source of fiber can also improve your dog’s digestion.

Check with your vet, though, before giving your dog any supplements.

If your dog insists on going outside within 30 minutes of his food, he usually just needs to relieve himself.

Take him out to let him go to the toilet, but don’t play with him or encourage him to do any other physical activity before he’s digested his food.

Some dogs vomit after exercising.

While its alarming at first, and also a little inconvenient (let’s be honest), it usually isn’t something to be majorly concerned about.

You should find that with a few simple tweaks to your schedule, this response becomes a thing of the past.

And if it doesn’t – that’s when you may need to contact a vet.

Can dogs throw up from over-exercising?

Dogs can throw up from over-exercising, particularly if they are dehydrated or if they eat too quickly after exercising or shortly beforehand.

Other related guides you may want to check out: