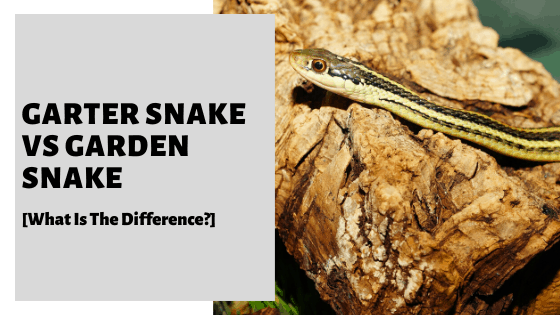 If you have ever been confused about the difference between a Garter and Garden Snake, you’re not alone. There’s a lot of confusion on the topic. I decided to conduct some research into the species to help clear this up. Here is what you need to know.

So, what is the difference between a Garter Snake vs. Garden Snake? Nothing. This is the same species of snake. This species of snake may be called either of these two terms, and they are often used interchangeably. It also depends on the context; they are commonly called Garter when kept as pets, Garden when seen in the wild.

Neither is right nor wrong. So, be confident if you are using either of the two terms and continue to do so.

Of course, it depends on who you speak to and your geographic location; this will likely result in their terminology and response.

Just be aware that you can use either and still be referring to the same species of snake.

Let us now explore the topic further to get a better understanding of how this species ended up with different names.

We will also look at some considerations about this type of snake, including what they look like and whether you can keep them as pets.

So be sure to read to the end!

Why Are They Sometimes Called Garter Snakes?

Garter snakes are prominent and common and mostly observed in gardens.

Without a doubt, this is one reason they have come to be known as garden snakes. However, there is a reason behind their ‘Garter’ name too.

The term “Garter” is due to their appearance. It is mostly used in the context of keeping this species of snake as a pet.

The word ‘garter’ refers to clothing garters, which look like thin stripes. On all garter/garden snakes, you will find this iconic strip that runs the length of their bodies.

It is likely that people associated the clothing stripes with the snakes, seeing the resemblance throughout the two.

Of course, garters used to be a highly fashionable item, and snakes have been present throughout this time.

Why Are They Sometimes Called Garden Snakes?

When it comes to being called “Garden”, this is usually because this is where they are seen and found.

You’ll often see Garter snakes referred to as Garden snakes when they are wild.

It is not common to refer to this species as a garden snake when kept as a pet.

They commonly appear in people’s yards and or other outdoor areas like sheds and greenhouses in the wild.

Another interesting take on the words is that Garter sounds very similar tGardenen – and it may have originated along these lines.

Garden is more appropriate to children, is easier said, and relates to where they are mostly seen and found.

It makes sense to call them this to young children.

So as we can see, neither name is technically wrong. It comes down to language differences and personal choice; there’s no need to correct anyone who uses either of the two terms.

Instead, it’s good to know when they can be used and the different contexts (pets vs. wild).

Garter snakes/garden snakes generally grow to around 2-3 feet in length and are usually slim and lightweight.

They can be a variety of different colors which can make them hard to identify. It is not uncommon to see this species in various green, brown, and grays).

Again, partly a reason behind their name is the “garter” style stripes that run across their scales down the entire length of their bodies.

Garter/garden snakes are pleasant and not poisonous. However, they can be considered a pest – especially if they are common in your area.

By now, you may be wondering if the Garter or Garden snake would make a good pet.

If you are looking to become a pet snake owner, this species can serve as a great first option.

Garter snakes are typically docile and gentle and are not likely to bite. They are also small in size, growing on average to a full adult size of around 25-30″ in length.

This makes getting an enclosure a lot more manageable, practical and affordable.

They consist primarily of a diet of small rodents (like mice), worms, slugs, and fish and only need feeding 2x per week. Therefore they are straightforward to look after.

Lastly, this species of snake is not poisonous and does not dislike being handled.

Can You Catch A Wild Garden Snake For A Pet?

If this snake species is commonly found outside, then naturally, you may be wondering if you could catch a wild garden snake and keep it as a pet.

This would prevent the need to buy one and save you some money, right?

You may be thinking it is also more humane or a better way to adopt a pet.

Unfortunately, catching a wild garden snake is not generally advised.

Wild garter snakes will likely be more scared and timid; they have not had much human interaction and are used to being wild and free.

As such, if you were to catch one and place it in a habitat, it may take time for them to settle and become confident within their new surroundings.

This is, even if you look after them very well.

Generally, garter snakes that have been bred in captivity are better suited to domestication.

This is the recommended approach by snake experts. You’ll find they are naturally less stressed and calmer.

That being said, catching a garden snake for a pet can be done; it just requires some careful consideration and an understanding that they may never fully adapt to being in your habitat and care.

They may continuously remain on edge and frightened in your company and may not like to be held.

Despite not being poisonous, they will also be more inclined to bite.

If you were wondering what the difference is between a garter and a garden snake, hopefully, you now know that there isn’t any.

This is the same species of snake that goes by different names.

It’s merely a matter of preference and or/tradition.

That being said, there are also some other reasons for how it has acquired separate names.

Their appearance and stripes that run along with their bodies and where they are most commonly found.

Ultimately, this is a small, docile, and cute snake that makes a great pet, especially for first-time snake owners.