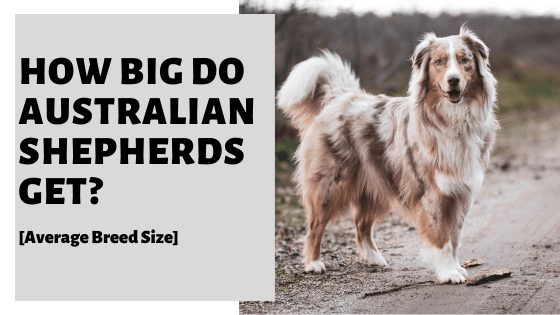 The Australian Shepherd, or ‘Aussie’ for short, has long been valued for their livestock herding skills by farmers worldwide. They also make a fantastic family pet due to their trainability and easy-going nature. They are classed as a medium-sized dog, but what exactly does this mean? How big can you expect them to get and by what age? I spent some time researching the breed to find out exactly what an owner can expect.

So, how big do Australian Shepherds get? Australian Shepherds typically reach between 18-23 inches in height and 40-65 pounds in weight, on average. They generally reach their full adult size by the time that they are 16 months of age. Factors that influence their final size include a combination of genetics, diet, exercise and neutering.

Height and weight aren’t everything however, there are many factors that play a part in the size that your Aussie will end up at full maturity, which leads to a great degree of variability between individual dogs.

This is precisely why this particular look can look so different.

Besides, they can possess a range of different looks and coat colors; including from merle (which is a pattern contrasting shades of blue or red).

Here is how the AKC (American Kernel Club) describes the Australian Shepherd:

A balanced, slightly longer than tall, of medium size and bone. Agile, solid and muscular without cloddiness

Let us now take a closer look at the average height, weight, and size of both male and female Aussies in further detail.

We’ll also be looking at some important aspects of their growth, such as when you can expect them to reach their full adult size, how fast they grow, and some of the factors that impact how big they will ultimately get!

So, be sure to keep on reading so you know exactly what you can expect from your Australian Shepherd.

What Is The Average Australian Shepherd Height, Weight and Size?

The average height of an Australian Shephard varies from males to females, with males generally growing to be taller than their female counterparts.

According to the American Kennel Club:

When it comes to weight, male dogs tend to be heavier than females, but this is assuming dogs of similar body composition are compared.

Body condition score, or BCS, is a way of estimating how ‘in shape’ an animal is.

A higher BCS means that the dog is overweight or even obese, and so therefore an overweight female may be heavier than an underweight male.

Australian Shepherds fit within the medium-sized dog category, but some larger Aussies may even be described as large-sized dogs.

There is always going to be some variation in the size that Aussies reach at full maturity and some individuals will grow to be much larger or smaller than the average.

Both male and female Australian Shepherds should reach most of their full adult size potential by 13 months of age, after this, growth slows dramatically and plateaus after 16 months of age.

This is assuming that your Aussie has received proper nutrition, the right amount of exercise, and doesn’t have any birth defects that might affect growth.

While in most cases an Australian Shepherd dog will be as tall as they will ever get at 16 months old, they do of course have the potential to grow outwards – in other words, to get fatter!

It is important to not overfeed your dog and to ensure they receive the correct amount of exercise, as being overweight will put unnecessary strain on your dog’s joints, increasing the risk of osteoarthritis as they get older.

Be sure to regularly monitor your Australian Shepherd’s weight.

If they fit within the height ranges mentioned previously but their weight is dramatically higher than the average Aussie, then consider putting them on a diet.

How Fast Do Aussie’s Grow?

A healthy, properly nourished Australian Shepherd puppy will perform most of its growth in the first 8-9 months of age. After this point, growth slows down and plateaus at 16 months old.

In general, male Aussie puppies will be consistently larger than their female equivalents of the same age, but both genders will grow at about the same rate.

Here’s an idea of how much an Australian Shepherd dog will weigh at different stages of development:

There are many factors that will influence how fast an Aussie puppy grows. Some of which are controllable, and others are out of an owner’s or veterinarians’ control.

It is important to be aware of these factors so that you can do everything in your power to ensure that your Australian Shepherd puppy grows at the optimal rate.

Genetics play a large role in how fast your dog will grow and how large it will end up being.

Genetic variation is very important within a species to ensure that all the individuals are diverse, and one of the areas in which dogs will differ is in their size.

Genetics are pre-determined, meaning that there isn’t much that you as an owner can do to change them, but genetics is only one piece of the puzzle.

Genetics can be thought of as giving the potential to reach a certain size or weight but the other factors on this list are vital for allowing this potential to be reached.

Of course, like humans, some Aussies will always grow to be bigger than others, but by maximizing the other factors in this list you ensure healthy and natural development for your dog.

Proper nutrition is extremely important for any dog as they develop.

They need the energy to grow, mainly sourced from carbohydrates and protein, as well as all the vitamins and minerals for a strong immune system.

Australian Shepherds are a highly active breed and so not only need energy for growth but also for exercise.

Be sure to choose a high-quality puppy food, that is well balanced and contains the micronutrients they will need.

Aussie puppies will do well on 3-4 meals per day, this can be reduced to fewer meals per day once they are fully mature.

Always check the packaging of the food that you choose, as it should have a guide of how much to feed your puppy based on what their adult weight will be.

Be careful not to overfeed however, more food does not always equal faster growth.

Excessive calories will be converted to fat, leading to an overweight dog and sometimes digestive problems.

You may have heard that giving your puppy too much strenuous exercise will stunt his/her growth, but how true is this?

Well, strictly speaking, excessive exercise will not stunt your puppy’s growth but it may cause damage to the growth plates within your Aussie’s leg bones.

Growth plates are areas at each end of the long bones, such as the femur and humerus, within your puppy’s legs, where cartilage is gradually converted to bone over time.

As growth slows down, less cartilage is converted to bone until eventually the growth plate completely hardens.

The height of an Australian Shephard depends on how long their leg bones grow, and hence how soon these growth plates close.

The repetitive impact from excessive running can cause these growth plates to develop abnormally, resulting in joint disease when your dog gets older.

But this doesn’t mean you shouldn’t exercise your Aussie puppy altogether.

Allowing your puppy to play and run around at their own will is fine, and very important for proper social development.

But avoid taking your puppy for long jogs until they have reached full maturity at 16 months of age.

Having your dog neutered early can influence your Australian Shepherds growth.

Early neutering delays the closure of the aforementioned growth plates, resulting in your dog growing taller than it should do.

This can result in joint issues later in life such as osteoarthritis.

Its often fine to neuter smaller breed dogs at a younger age such as 6-8 months old, but medium to larger breed dogs such as Australian Shepherds are best left until they are older and have reached a stable weight.

Monitor your dogs’ weight regularly and when they seem to have plateaued then talk to your veterinarian about having them neutered.

This usually ends up being after 16 months of age.

If you are concerned that your Aussie is not growing properly, or if they are staying small then contact your vet immediately as this may mean that one of the factors above has stunted their growth.

As the name implies, this breed is a scaled-down version of the Aussie that usually grows up to 18 inches tall and can weigh up to 40 pounds when fully grown.

This breed was created by purposely preserving the genes that cause dwarfism, which can result in other health issues such as vertebral disk disease, patellar luxation, and fragile bones.

It is important to be aware of this if you are thinking about adopting a Miniature Aussie puppy and the possible increased vet bills that come with it.

Always choose a reputable breeder that meets puppy breeding guidelines when purchasing a new Aussie, be it a standard-sized or miniature version.

Australian Shepherds are certainly not the largest of dog breeds.

In fact, for their height, they are relatively lean.

But is this really a surprise? They are high-energy working dogs by nature after all!

Nevertheless, they have become popular family pets and companions due to a range of positive attributes and characteristics.

In temperament Aussies are good-natured, affectionate and highly intelligent; three specific traits you would look for in any dog.

It comes as no surprise to learn that they are currently ranked at #17 on the AKC breed popularity rank – and it goes all the way up to 196.

That being said sufficient early socialization and obedient training are going to be required to get the best out of this breed, along with sufficient exercise (for their age).

In doing so, you’ll have a great, medium-sized dog.