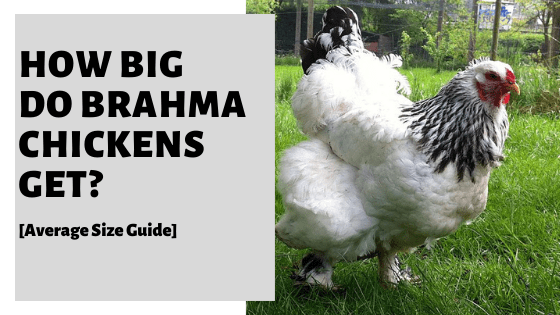 Brahma chickens just look great. With their light or dark fluffy feathers that even extend down over the feet. But with a deep and wide body, they also look pretty big. But what size are they? Here is what has routinely been recorded by keepers.

So, how big do Brahma chickens get? Brahma chickens typically reach 30″ in height, and weigh between 8-12 lbs when fully grown. There is some variance between the males (roosters) and females (hens), with the males weighing slightly more, on average. Either way, this is considered a large-sized chicken.

If you take these values on their own; they may not sound or appear that large.

But if you consider that they stand almost double the height and weight of a Leghorn, this name actually begins to make quite a bit of sense.

As such, they’ve acquired quite the reputation, even being titled “the king of chickens” by some keepers.

Perhaps only the chicken that can rival their size is the ‘Jersey Giant’, and think about that name for one second!

With a deep and wide body, along with their expansive feathers, these are quite the site to behold.

Let us now take a closer look at the average size of this breed, before looking at the amount of space a keeper needs to own them.

And last but by no means least, we will be looking at the size of the eggs!

So, if you are interested in adding a Brahma or two to your flock; don’t stop reading. You’ll need this information, for sure.

Average Size Of A Brahma Chicken

The average size of a Brahma chicken will mostly depend on their age and whether they are male or female, as males are known for typically being a few pounds heavier, on average.

It goes without saying that in order for a chick to grow healthily, and reach their potential in terms of size and development, then their needs must be met.

Diet, light, heating and keeping parasites and pests to a minimum, are perhaps the main factors to consider here.

But assuming these are all in place, and a chick is carefully taken cared of, here are the average sizes to expect:

Of course, these are just averages and there will be some variance in between chickens.

One thing to consider is that as the Brahma is such a formidable bird at full size, they do generally take longer to mature.

Let us now see exactly how long in the following section.

At What Age Are Brahma Chickens Full Grown?

A Brahma chicken should be fully grown by the age of 2-3 years, depending on the sex.

For instance, hens typically finish growing around the age of 2 years. But as a rooster has more growing to do, they may stop as late as 3 years!

As such, this is quite a slow-growing breed, especially when you consider that medium breeds can finish growing by the age of 6 months to 1 year.

Slow growth is partly due to the large size in which they become, which naturally takes longer, but it’s likely that genetics is a factor too.

Ready to keep and care for a flock with confidence?

Our instantly downloadable eBook will show you how.

How Much Space Do Brahma Chickens Need?

Brahma chickens should be given 5-6 square feet of space inside the coop, given their large size. This is slightly more than your average breed of chicken.

It is important not to allow any less space, as this can lead to issues such as feather picking, pecking, and bullying-type behaviors.

Other aspects of the coop to consider are the roosts and the nesting boxes.

Brahma’s require around 8-10 inches each to fit comfortably, and as they are heavy birds, these perches should be low down to enable them easier access. Ideally, around 12-18 inches off the ground.

Any lower than this and your birds could injure themselves, getting up or down from the roost.

Brahma’s should also be given access to slightly larger nesting boxes, around 14×14″ in size. This makes them a little more comfortable than the standard 12×12″.

Even though they can fit into them, they will not be as well received.

Again, nesting boxes should be easily accessible and kept low to the floor.

Doorways to the coop should also be slightly wider, to allow them easier access.

In terms of outside space, they should be given around 12-15 square feet each.

Interestingly and perhaps counter-intuitively, they are quite content in being confined, and as they are so large they cannot fly very well – making containment much easier.

That being said, they love to roam and free-range, and this should be emphasized just like you should for any other chicken.

Brahma chickens typically lay medium to large brown eggs, so you can expect eggs to weigh between 50-60 grams, on average.

Considering their size, Brahmas are actually considered to be good egg-layers, especially during the winter (which is a period that many breeds will naturally rest).

The average Brahma will lay 3 eggs per week, which equates to around 150 eggs per year.

Of course, there can be some individual variance, and it does depend on several factors such as the hen’s age, the diet, the time of year, and the amount of lighting they receive.

Even though it may slow down, Brahmas do lay consistently throughout the year. You should still see a decent return during the months of October through to May.

It is during the early summer that these birds tend to get quite broody, and will start to sit on their nests.

Eggs from these chickens are known to be delicious; with larger yolks than you would expect in your average egg.

Some keepers will improve the color of this yolk by adding particular herbs to the diet.

When Does a Brahma Chicken Start Laying

Brahma chickens will generally start laying around the age of 6-7 months. Although, it has been known for them to start laying later than this, even up to 12 months if they are a larger hen.

Just as is the case with most breeds of chicken; the first few eggs may show quite some variance in terms of size and consistency.

It typically takes a few months for this breed to start providing some regularity to their laying. At least in terms of egg size, shape and appearance.

So there you have it. Brahmas are big chickens, with big feathers.

But while they are large, they are also known for being very friendly, docile and calm.

This is definitely the kind of breed you want to be adding to your flock; entertaining to watch and observe, a good egg-layer, and great in general temperement.

And at the same size, due to their size, they are quite intimidating to the predator. In fact, hawk attacks are rare in adults which bodes well for keeping them safe.

But you will need to plan accordingly.

For instance, you do need to consider your coop and the amount of space you can afford them. Roosts and nesting boxes need to be of appropriate size.

We need our birds to be comfortable after all!

And then there is the feed.

It naturally follows that these birds have large appetites.

So you will need to provide sufficient food, along with the ability to roam – where you can.