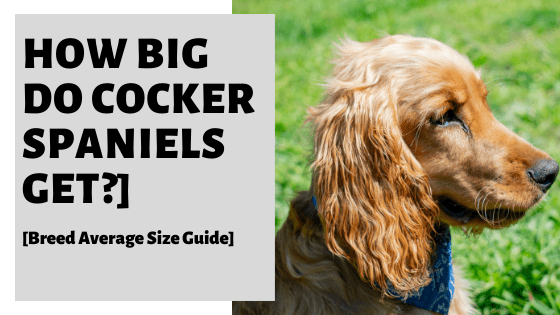 If you’re considering getting a Cocker Spaniel, or have recently got one, you’re probably wondering how big they will eventually get. What do you need to know when looking after them? How much space do they need? Are there differences between the American and English Cocker Spaniel breeds? Here we’ll provide you with everything you need to know about the potential size of your Cocker Spaniel.

Either way, Cocker Spaniels are considered to be medium-sized dogs.

But there are important differences between American vs. English Cocker Spaniels, as we shall explore below.

And in reality, if you landed here today, you may be considering either or both breeds.

That’s right; they are established and considered separate breeds.

So take note of that (if you were unaware already).

Nevertheless, let us explore what you can expect from either breed in all things relating to size!

The most significant difference between American and English Cocker Spaniels is their overall size.

American Cocker Spaniels are shorter and weigh less than their English counterparts.

Another difference between American and English Cocker Spaniels is the size and shape of their heads and muzzles.

An American Cocker Spaniel usually has a round head with a broad, square muzzle, whereas an English Cocker Spaniel will have a longer and narrower head.

The eyes of an English Cocker Spaniel are set more towards the sides of their (longer) muzzles.

American Cocker Spaniel’s eyes are larger and are placed more towards the front of their faces.

There’s also a difference in the size of their ears. The American Cocker Spaniel has shorter ears than the English Cocker Spaniel.

Although both breeds require daily brushing, such long fur requires more maintenance than the shorter and silkier coat of an English Cocker Spaniel.

An American Cocker Spaniel’s coat also has fringes on his ears, legs, and tummy (known as feathering).

At What Age Is A Cocker Spaniel Full Grown?

Both the American and English Cocker Spaniel breeds will reach their full adult size between 9 and 12 months old.

After 12 months, young Cocker Spaniels will continue to gain muscle tone. They will reach full maturity between 18 and 24 months old.

Here’s the typical progression that you can expect for both breeds.

What Do Cocker Spaniels Look Like Once Fully Grown?

Once these types of Cocker Spaniels are fully grown, it’s easier to spot the differences between them, despite their similarities.

Similarities In Both American and English Cocker Spaniels

Even when fully grown, the American Cocker Spaniel isn’t taller than 15 inches. He will usually weigh between 20 to 30 pounds, with males slightly heavier than females.

His head will be dome-shaped, with narrowly set eyes, even from puppyhood. He’ll have a smaller muzzle and shorter ears than his English cousin.

He will have a long and dense coat.

The English Cocker Spaniel is only slightly taller than his American cousin: about 2 inches taller, on average.

Because he has more height than length, he can appear to be more of a square shape.

As with the American Cocker Spaniel, males can weigh slightly more than females. An English Cocker Spaniel is typically the heavier of the two breeds.

He usually won’t weigh more than 26 to 34 pounds as an adult.

His head will be slightly flatter, with his ears being so long that they almost touch his feet. His eyes are widely set apart, and his muzzle is longer than his American counterpart.

His coat will be shorter and silkier.

Do Cocker Spaniels Need A Lot Of Space?

The amount of space your Cocker Spaniel will need depends on which breed you choose. Briefly put, the English Cocker Spaniel is a sportier breed that requires more space. However, both breeds have advantages, including their suitability for agility training, dog sports, and therapy work.

The American Cocker Spaniel is an excellent and friendly companion who prefers to spend time indoors with his family rather than romp around outside all day.

American Cocker Spaniels do quite well in smaller living areas such as apartments, though like all dogs, they will need and appreciate daily exercise.

These Cocker Spaniels are a very popular breed in the US since they can do well in any kind of living situation.

Whether you live in a city or on a farm, your American Cocker Spaniel can thrive.

They are people-pleasers with a high degree of sensitivity and a happy personality, so they also make excellent therapy dogs.

They are excellent travel companions because they are slightly smaller than English Cocker Spaniels (and compared with other breeds).

These dogs are perfect for first-time pet owners, whether you have a lot of space or not. They are good-natured dogs who are happy enough with a brisk 30-minute walk each day.

They’re also great with children, as they don’t mind sharing their space (or toys) with other family members.

The English Cocker Spaniel is full of energy and wants to spend lots of time running and playing outdoors with you.

He has a high hunting drive and will want to keep active every day.

You will need a house with a large yard or easy access to the outdoors. English Cocker Spaniels require fenced-in outdoor space, as well as lots of physical activity outside.

These dogs love discovering new parks, hikes, and paths – therefore, make sure your dog will have plenty of space to roam.

Like American Cocker Spaniels, this breed is people-oriented: your dog will want lots of exercise, but he will also need occasional naps and will happily follow you around all day!

These dogs are great for both therapy work and dog sports.

How Can You Tell How Big Your Cocker Spaniel Will Be?

Here’s what to look for to get an idea of how big your Cocker Spaniel will get, regardless of whether he’s an American or English Cocker Spaniel.

Other Factors That Affect The Size Of Your Cocker Spaniel

Here are some other things to take into account that can influence the eventual size of your Cocker Spaniel, whether he’s American or English.

Spaying or neutering can affect the eventual size of your dog, particularly in male dogs. Because testosterone plays a part in male dogs’ growth, it’s best to wait till your dog is at least 6 months of age.

One recent study with research for various breeds shows that for female Cocker Spaniels, the best time for these types of interventions is at 2 years of age.

Genetics have their part to play in the size of your adult dog, which is why some people do DNA tests (see above).

As with any animal, the quality of their nutrition affects their growth. While your puppy is growing, he needs nutritious food to help him develop and grow.

If you are unsure what kind of food to give your Cocker Spaniel puppy, your vet can advise you.

Walking is usually the best way to start, along with games of fetch and some off-lead time so that your dog can explore new places and smells.

Cocker Spaniels are not large dogs, by any means.

But there are differences among them.

Particularly between the American and English breeds.

Other than this, you will even find individual variance within each breed itself (just as you would expect in any breed).

As such, the biggest in the breed can end up being quite a bit larger than the smallest.

A lot of this has to do with genetics, so do look at, or consult a breeder on the parents’ size (of the dogs used in breeding) for a more accurate estimation.

Ultimately, these dogs are a great size for any owner or family; they’re not too big to be inconvenient, nor too small that you never know where they are!

Oh, and it helps that they are not aggressive dogs. But they do shed. You may need to consider that!