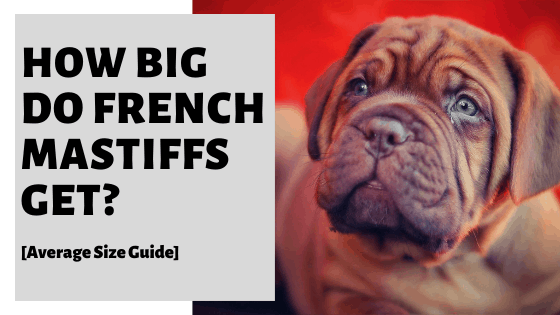 French mastiffs, otherwise known as Dogue de Bordeaux, are unquestionably unique in appearance. They are known for their larger heads which wear a near-constant serious expression on their profoundly wrinkled faces. But what kind of size are these dogs when fully grown? Here is what you should know.

So, how big do french mastiffs get? French Mastiffs typically reach between 23-27″ in height and weigh between 120-140 pounds (54-63 kg), on average. They generally reach their final size by 19 months of age and there is little variation in size between the males and females of the breed.

With those dimensions, the French mastiff is classified as a large breed.

And they are a very powerful, athletic, and muscular dog too.

Their build keeps them low to the ground too, and added to their strong legs enables them to accelerate at incredible speeds for short periods.

They can be intimidating dogs for sure.

But aside from how they look, underneath is an even-tempered, loyal, affectionate, and sensitive dog.

Let us now take a closer look at the Dogue de Bordeaux and its rate of growth. This way, you can see exactly how a cute young pup will grow into a larger, more formidable adult dog.

We will then take a closer look at some size considerations for owners, so if you are particularly interested in the breed – I suggest you keep reading!

At What Age Is A French Mastiff Full Grown?

The average French mastiff will reach their full adult size around 19 months of age, and this is commonly seen in both the males and the females of the breed.

Let us now take a closer look at their growth trajectory; from the early stages of ownership through to their adult maturity.

Growth Of A Male French Mastiff

Growth Of A Female French Mastiff

As you can see, there is minimal difference between the males and females of this breed.

You’ll also notice upon closer viewing of the data, that these dogs grow very quickly during the first 12 months.

They then quite drastically slow down in speed of growth, doing so gradually for the next 7 months, where they tend to finish up.

The first 6 months is the most rapid period of growth in particular.

So, the French Mastiff will acquire the majority of their size while they are still young. They’ll fill out as time goes on.

Despite being a large and sturdy breed, the French Mastiff does not need an endless amount of space like some other breeds.

Sure, they need enough to be comfortable and move about freely, but they are generally very laid back and easy going.

They are not the most energetic of breeds or active of dogs, so having your own outdoor space is not so much of a necessity.

This is, of course, assuming that you are able to take them out for walks fairly regularly. More so if they are kept inside for the majority of the day.

While some will argue that this breed is suitable for apartment living; but it does depend on the apartment and the dimensions of the home.

They are a large dog after all.

This means that traveling in the car may be particularly challenging, especially when they do reach their final adult size.

What is imperative however, is that these dogs are not left at home alone for too long.

This breed is known for attaching very strongly to their owners and can suffer with separation anxiety fast.

Slowly introducing this dog to spending time alone, along with spending sufficient time with them regularly throughout the day is a must.

When owning any breed of dog, its essential to be aware of their own exercise and dietary needs.

Besides, this can ensure they reach their full-size potential and keep a healthy weight.

Let us now take a closer look at what this looks like for the French Mastiff:

French Mastiffs’ exercise needs are somewhat lower than in other breeds, but this does not mean that they do not need exercise at all.

This breed is prone to obesity, so it is advised that they are taken for two daily walks, one in the morning and again in the evening. 30 minutes each time should suffice.

Exercise is not just important for their physical body but also keeps them sufficiently mentally stimulated.

One thing to consider is that puppies and young French Mastiffs should not be given the same amount or type of exercise as adults of the breed.

They have a lot of growing to do, and over-exercising can lead to injury to developing bones and joints.

For this reason, low-impact exercise is advised until they reach 19 months of age.

At the same time, 10 minutes of walking per day should suffice until they are 8 months of age. After this, they can slowly progress to 30 minutes per day.

Generally, you need to slowly build up their exercise over time, prevent them from running up and down stairs, and stop them from routinely jumping off surfaces.

For this breed, in particular, swimming is an excellent low-impact activity – so long as proper precautions are in place.

Here are some other considerations to take into account.

As a mastiff with a deep-chest, they should not be exercised 1-2 hours before or after eating.

Otherwise, these dogs can suffer from ‘bloat’ – where gas can build-up due to inadequate digestion. It can be very dangerous.

Likewise, this dog should never be exercised in the heat of the day – they are particularly prone to overheating and dehydration.

This dog is known to suffer from several food allergies, including several grains.

It, therefore, comes strongly advised to purchase a high-quality grain-free dog food – high in protein, for your dog to get all the nutrition they need to grow into a healthy and robust dog.

As a fast-growing breed, they should be fed puppy food until the age of 12 months, then switched over accordingly.

If your French Mastiff is growing particularly fast or putting on excess weight, switching them over to an adult dog food at 8 months is encouraged.

Follow dog food manufacturers instructions on how much to feed, consult your vet and get your dog weighed regularly.

Be sure not to overfeed them or provide too many treats.

Any excess weight can result in joint and development problems.

The French Mastiff or Dogue de Bordeaux is a large, athletic breed of dog. But despite their build and musculature, they do not require as much exercise as you might have thought.

At the same time, many people are surprised to learn that these big dogs possess a sweet and sensitive nature.

The Mastiff appearance can be deceiving.

But they can be stubborn and unresponsive to those who do not put a good training program in place when they are young pups.

Socialization with other people and dogs is also a must.

And they certainly need attention. And lots of it.

This is not the breed to leave alone for long periods of the day.

While they generally get along well with children, it is always advisable to watch any large dog around them.

Especially if they do not know them or they are particularly young.

Ultimately, if you are considering this breed, you should consider your circumstances.

They are generally not advised as a family pet; they can suffer from various health problems and typically only live for 5-8 years.

But, they do make terrific companion dogs, or with their appearance size in mind, a very effective watchdog.