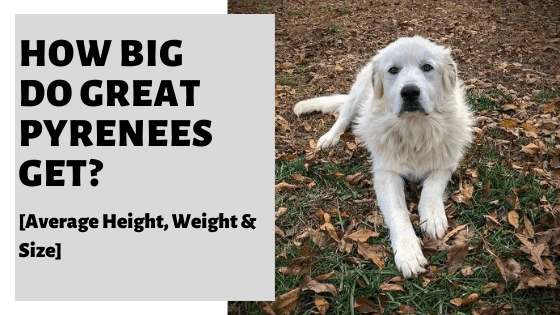 Any dog with the word ‘Great’ in the name naturally results in questions about their size. But how large does the Great Pyrenees really get and what factors can contribute to their full-grown size? I spent some time researching the breed standard and analyzing the data and will be sharing this with you here today.

So, how big do Great Pyrenees get? The average Great Pyrenees will stand between 25-32 inches in height and weigh between 85-160 pounds (38-72 kg) when fully grown. They generally take up to 2 years to reach their final size. Males are generally much heavier than females, although both are still considered an extra-large breed.

Either way, they are beautiful large dogs.

They were initially bred as working dogs, but they even worked their way up to become the official Royal Dog of France.

Today, the Great Pyrenees is a popular therapy and rescue breed, alongside being a loyal companion and family pet.

What could be surprising, is that they are considered giant, XX-Large breeds.

Upon first glance, they may not seem to be as large as they really are.

If you ask most people which breed is bigger between a Great Dane and a Great Pyrenees, most would probably incorrectly guess the Great Dane.

Let us now take a closer look at the size of the Great Pyrenees in further detail.

We will also be covering some of those factors that play a part in how big they ultimately get, and some considerations for owners regarding their size.

So, be sure to keep reading until the end to ensure you get all the information on this breed that you need!

How Big Is A Full Grown Great Pyrenees?

Great Pyrenees are considered to be giant, extra-large breeds. The typical and average size range and breed standard is between 25-32 inches in height and 85-160 pounds.

There isn’t a lot of difference in height between a fully grown female and male Great Pyrenees.

Like many breeds, the males are taller than the females, but only by an average of between 2 and 3 inches.

The female Great Pyrenees is generally between 25 and 29 inches when fully grown, while the males are between 27 and 32 when they are fully grown.

The big difference as you can see is in weight.

Males are considerably heavier than females, being bulkier and carrying more muscle mass than their female counterparts.

Naturally, they will be stronger. We will discuss this further in the next section.

At first sight, the Great Pyrenees doesn’t seem that tall, but then when you get closer to one and realize how far upon you, they come you see how big this breed really is.

Not too many dogs grow to be as big as the Great Pyrenees, yet this breed is often forgotten about when one speaks of giant breeds.

Most people think of breeds like the Saint Bernard and Alaskan Malamute when thinking of XX-Large breeds, though these breeds are smaller than the Great Pyrenees.

How Heavy Do Great Pyrenees Get?

Not all breeds have a gap of 75 pounds with the average range of weight between males and females.

The female Great Pyrenees seems like a lightweight compared to the males, weighing on average, between 85 and 115 pounds when they are fully grown.

The males are much heavier with a range of between 100 and 160 pounds when they are fully grown.

With such a big difference in weight, compared to such a difference in height, it probably isn’t too hard to know the different genders just by looking at the individual dog.

Due to their weight, the Great Pyrenees falls into the category of an XX-Large breed, with the likes of the Great Dane, Saint Bernard, and Alaskan Malamute.

The Great Pyrenees stands the same height as the Great Dane but actually weighs more.

Many people don’t think of these dogs as being that big.

While they may think that the Great Pyrenees as being a big dogs, they are generally thought to be closer in size to a Bernese Mountain Dog than a Great Dane.

Of course, just because these are the average measurements doesn’t mean that all Great Pyrenees dogs will be this size. Just like with any other breed there are always exceptions to the rule.

When Is A Great Pyrenees Fully Grown?

Like many larger breed dogs, the Great Pyrenees takes quite a bit of time to reach their full size. On average it will take a Great Pyrenees two years before they are fully grown.

The males may get to their full height around a year old, and usually weigh in at 100 pounds at that time, before adding another 40 to 60 pounds over his second year of life.

Most dog breeds reach their full height months before reaching their full size, so this isn’t out of the ordinary.

Oftentimes with larger breed puppies, you’ll notice that they go through several different growth spurts, where they will grow out and then up, and then out and then up.

Below we will take a look at the respective growth rates of both male and female Great Pyrenees as they age:

Growth Of A Male Great Pyrenees

Growth Of A Female Great Pyrenees

As you can see, a puppy this size can cause a lot of damage, whether intentionally or not.

Another thing to consider is mental maturity. This is when they start behaving like an adult dog. The Great Pyrenees mentally matures at about 2 years of age as well.

So, for about a year there is a 32 inch, 100 plus pound dog that is traipsing around.

So, if you’re going to own a Great Pyrenees then make sure you’re prepared to have an oversized puppy for quite a while.

The Great Pyrenees is a very intelligent dog, with a mind of its own, and a habit of figuring things out.

This, combined with their size, can be very problematic so it is strongly recommended that you get your Great Pyrenees socialized at a very early age.

In addition to socialization, training is extremely important for the breed or they can become territorial and aggressive.

An aggressive 160-pound dog can be very intimidating.

What Contributes To A Great Pyrenees’s Size?

One of the first things to consider when thinking about what contributes to a dog’s final size is its lineage and parental breeds.

The ancestry of the Great Pyrenees dates back around eleven thousand years, from Asia Minor.

The modern Great Pyrenees is thought to have arrived in the Pyrenees Mountains around 3,000 years ago.

The breed is named after region bordering France and Spain in which they were found.

Without knowing for sure which breeds created the Great Pyrenees we don’t know if the parents contributed to the size of the modern-day Great Pyrenees.

We do know that one factor that contributes to the size nowadays is that if two parents on the larger size of the average breed they will have a larger puppy.

Another factor that has the possibility of contributing to the size of a Great Pyrenees has to do with food, especially when it comes to feeding your puppy.

Of course, food is good for your Great Pyrenees puppy, but it can also cause problems, and we’re not just talking about obesity.

If puppies stay on puppy food for too long, they can grow too big too fast. After a year old, puppies should be switched to adult food.

Both their puppy and adult foods should be high-quality foods that are specifically created for large breed dogs.

For the first few weeks of their life the Great Pyrenees might be on regular puppy food, but they should be switched to the large breed puppy food by age 16 weeks.

Being on the general puppy food will cause your puppy to continue to grow at a speed that can be detrimental to them.

Just like with any puppy, getting the right nutrients and energy for their size, can be a bit of a trial and error.

The importance of proper nutrition will really become evident later in their life. If your Great Pyrenees grows too fast, then there is a good chance that they will have issues with their joints and muscles later in life.

Nobody wants to see their dogs having issues at any point in their life, but it can be extra detrimental to breeds like the Great Pyrenees, and other working dogs. The Great Pyrenees makes for great therapy and rescue dogs.

If there are any issues with their joints and muscles, then they will be disqualified from being able to perform these tasks.

Being denied the ability to work is detrimental to breeds that originated as working dogs who love to please.

The Great Pyrenees starts out life as a small ball of white fluff, only to grow up to be a 100-pound puppy that’s close to three feet, by the time they are one years of age. These dogs grow fast!

Even this giant size is not their full size, and they can grow another 40 to 60 pounds after the first year.

Male and female Great Pyrenees are close together in height, with the females ranging between 25 and 29 inches and the males between 27 and 32 inches, at the shoulder.

The biggest difference between males and females comes with their weight.

Females range in size of 85 and 115 pounds, while the males are much larger at an average of between 100 and 160 pounds.

This obvious size difference can make it easy to tell the difference in gender upon a quick glance.

The Great Pyrenees is named after the region of mountains bordering Spain and France that they come from, along with their size of course.

While they can be traced back about eleven thousand years ago in Asia Minor, their exact origins are unknown, including the breeds used to create the modern-day version of the Great Pyrenees.

This extra-large dog breed needs to be socialized and trained from a very young age as they have a propensity to be territorial and aggressive.

When trained properly the breed makes a great family dog that is good with kids, loyal and due to their sheer size, makes a great guard dog.