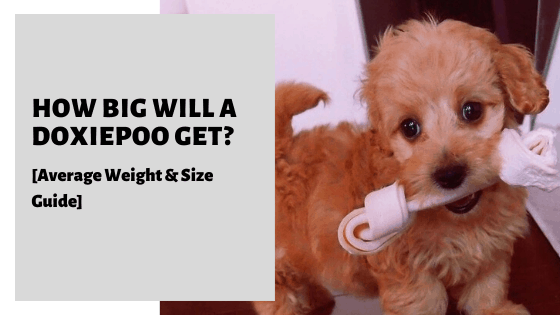 If you are looking at the Doxiepoo breed, you may be wondering how big they get. What kind of size do they grow to and when can you expect them to be fully grown? These are the kind of questions we will be answering today. I decided to do some research on this hybrid dog breed and would like to share with you my findings.

If you are the kind of dog lover that favors personality over consistent physical traits, then you the Doxiepoo is likely the dog breed for you.

This dog breed is a mix of Dachshund and poodle and comes in a number of different ways and styles depending on how they are bred. These dogs are notorious for their intelligence, as well as for their affectionate, and playful nature.

Let us now take a closer look at the breed and their growth potential, along with some of the factors that influence their full adult size.

Before we even begin to look at the growth potential of a Doxiepoo, we first need to understand how they are bred – as this can largely influence their size.

Doxiepoo’s are one of a number of poodle hybrids (e.g. Cockapoo, Yorkiepoo etc) and they have been created through breeding two different pedigree dog breeds with one another.

This is known as interbreeding.

This type of breeding has enabled new breeds of dogs, which inherit a number of traits from the parental breeds. Equally, it has enabled breeders to minimize if not eliminate health complications that are likely to occur in a pure-breed.

Interbreeding takes place over multiple generations of dog (generational breeding). This enables breeders to more closely refine the traits inherited in each new litter. This is why such dogs have been refereed to as ‘designer dogs’.

Generational breeding causes litters to differ quite dramatically. This is why one Doxiepoo can look very different to another – it depends on how they were bred and what traits and characteristics were bred into their lineage.

As the name suggests, generational breeding takes place over a number of years and through various different dogs.

Therefore, certain acronyms are applied in reference to each generation. These are: F1, F1b, F2 etc. Breeders will use these classifications to describe the litters of hybrid dogs.

The number is in reference to the generation of the litter, whereas the letter refers more specifically to the breed used.

The F1 generation is generally the more expensive. Additionally, the latter generations (F2, F3 etc) are much more likely to possess different traits. There will have been more ‘designing’ whereby the breeder has had more of a chance to breed in traits and characteristics that they desire. .

So, how does this affect the breed?

Generation breeding has meant that breeders have produced Doxiepoo’s that vary in size, coat style and color.

Here is a quick overview of how the generational breeding process works.

So as you can see, a Doxiepoo can be bred in a multitude of different ways.

While with time, knoweldge and experience there has been a surge in multi-generational breeding (Doxiepoo to Doxiepoo), and also in Doxiepoo to Poodle or Doxiepoo to Dachshund breeding; you’ll often find that most breeders work with the parental breeds only. This means most litters and puppies are first generation.

If you are yet to get a Doxiepoo, you should ask potential breeders what dogs have been used in the breeding process.

If you presently own a Doxiepoo, its a good idea to seek out such information.

Either way, this will help you to understand the growth rate potential of your dog.

How Big Do Doxiepoos Grow?

As briefly referenced above, the size of a Doxiepoo, both at birth and once they reach adulthood, is mainly dependent on how they were bred.

As the Doxiepoo is a cross between a Dachshund and either a Miniature, Toy or Standard-sized poodle, they can range from small to medium dogs.

The size varies quite a bit depending on the size of the poodle parent used during breeding.

So, here are the different size types of Doxiepoo’s in relation to how they were bred

With all this being said, Doxiepoos reach an average height of 8 to 23 inches and a weight of 5 to 30 pounds.

As is the case with most canines, male Doxiepoos tend to be bigger than their female counterparts.

While just as how they look can differ, the temperament of a Doxiepoo can range too. But, some qualities, traits and characteristics are more likely to arise. These are:

What Age Is A Doxiepoo Fully Grown?

As we now know, Doxiepoos can be categorized as either a toy, small, or a medium dog breed. The smaller the dog, the faster it matures.

With mixed dog breeds, it can be a puzzle trying to figure out at what age they will reach their full-size. That being said, the following tables can give you a good insight of what to expect.

Doxiepoo (Bred From a Toy Poodle)

Doxiepoo (Bred From a Miniature Poodle)

Doxiepoo (Bred From a Standard Poodle)

The information, as given above, should give you some idea of what you may expect your Doxiepoo pup to weigh at the various stages of growth and development.

Aside from the weight and physical maturity, there are other aspects to your pup’s development that must come together to be an adult dog.

Your puppy must mature mentally and sexually as well as physically, and these processes won’t occur at the same time.

It is also important to note that in the early stages of life, you should look to socialize and train your dog. This will ensure that they are well-mannered and behaved in the prescence of other people and dogs later in life.

Equally, during the puppy stages you need to be sure not to overexercise them. The Doxiepoo breed is prone to various health issues (due to the health risks associated with Dachshunds and Poodles).

Dachshunds, for example are prone to a lot of potential issues with their spines and hips, and around 25% of them suffer with a condition known as IDD.

While exercise is important for dogs, be sure not to overexercise your Doxiepoo and be sure that you are not letting them freely jump up and down off of furniture and other heights.

What Contributes To Doxiepoo Size?

A few factors contribute to your Doxiepoos adult/mature size and also the rate of growth. Some of these issues are within your control, and they include:

You may be wondering how neutering impacts the size of your Doxiepoo especially as it involves your dog’s sex hormones in the different development stages of your puppy.

If you spay your dog before they cease growing, it may prolong their growth as they lack the hormones required to turn this process off.

Neutering doesn’t affect your dog’s weight, as long as you feed them appropriately.

It is therefore important to discuss neutering with your Vet. They will be able to advise a suitable time for and age of life for this breed.

Weak development and other health issues can be the result of not being fed a proper diet.

Malnutrition is not only being underfed or fed the wrong foods, but it can also include overfeeding.

You can accelerate your puppy’s growth rate by overfeeding them, but it is of no benefit to your dog.

Overfeeding your puppy can also lead to them having digestive problems. An otherwise healthy canine that is fed more than what they need will also get fat.

It is worth noting that body weight is not always a reliable guide to determine if your pup is too fat or too thin.

You can judge the health of your puppy by using your hands and eyes.

You can consider the following as a checklist and if your puppy is the correct weight for his age you can check off each box as you go along.

#1) There should be no visible ribs for a puppy that is under six months old. However, as you run your hands down the sides of your puppy you must not be able to feel ribs. There should be a layer of fat over the ribs. If you do not feel ribs your dog may be overweight.

#2) Your puppy should have a waist. When you look at your puppy from a height, you should be able to see their waist before his hips and rear.

#3) Your puppy should have a tucked tummy. Your puppy’s tummy should slope upwards so that it is at its highest before it’s out of view between their hind legs.

Its especially important for the Doxiepoo dog breed not to become overweight, due to the potential physical issues they can develop.

Be sure to feed them an optimal dog food and be careful with treats and other rewards.

Along with this, if your dog is to encounter any health issues it may affect their growth and size. If you experience or observe any abnormalities, its important that you raise these concerns with your vet.

Doxiepoos are a unique dog breed. Unfortunately, they are known to end up in shelters because of their unpredictability. Some owners do not get what they thought they would – and this is a result of the way they are bred and variance between them.

However, these dogs possess excellent personality traits, and they are certainly among the most loving and loyal of dog breeds.

It is strongly recommended to get your Doxiepoo from a reputable dog breeder, even if this is a challenge and comes at higher expense. This will ensure they have been bred humanely, ethically, and will ensure your dog does not encounter health issues and complications later in life.

Backyard breeders and puppy mills – while offering Doxiepoo’s at much more affordable prices should be avoided at all costs.

Doxiepoo’s can come in a variety of coat-types, colors, sizes and weight. Either way they are energetic dogs that live well in both houses and apartments alike, as long as they are given enough time to exercise.

These dogs are wonderful with children, and they make diligent watchdogs. Be prepared as these dogs can be quite yappy. With socialization and training however, you can greatly reduce or eliminate this behavior.

If you are looking to get a hypoallergenic dog, then a Doxiepoo is not for you as they are also known to shed.

Ultimately, if you are yet to get a Doxiepoo, be sure to do your research and due diligence into the breed ahead of time.

Are Doxiepoo’s good family dogs? Doxiepoo’s are considered excellent family dogs. They are loyal, playful and friendly. They are generally very well behaved around children but you should train and socialize them from a young age.