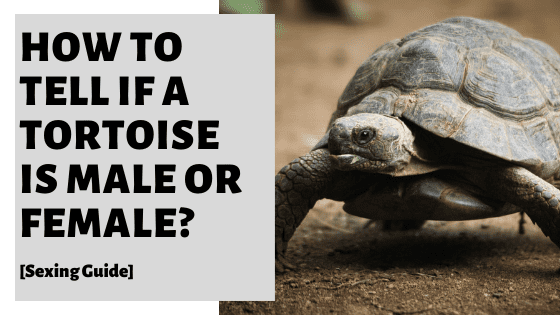 It can be challenging to determine if a tortoise is male or female, compared to other animals whose genitalia is obvious. There are several ways to tell the difference, once you know how. Knowing if you have a male or female will help you know what your pet needs and what you can expect during the mating season. And it’s certainly useful if you plan on breeding tortoises!

So, how do you tell if a tortoise is male or female? The best way to identify a male from a female tortoise is by looking at the shape of their shells and the length of their tails. Females typically have larger shells and shorter tails. Although not all species have the same markers to identify their sex, so familiarize yourself with your species and the distinctions.

That’s the basics of it.

Of course, you are going to want a little bit more information on the process to confidently do it yourself.

And there are several other ways too.

So let’s delve deeper into sexing a tortoise and other important considerations along the way.

How To Sex A Tortoise

Here are more details as to how to determine the sex of a tortoise.

The Size Of The Shell

However, the size of the shell isn’t reliable enough to determine the sex of a tortoise, as there are small females and large males: a size overlap is often possible.

In addition, tortoises won’t mature for several years, so you need to make sure you are looking at a fully developed tortoise.

For most tortoise species, it can take between 5 to 8 years to reach maturity.

Some species, however, can take as long as 20 years to reach their full size.

Red-footed tortoises are an exception to this rule of size, though.

Male and female red-footed tortoises tend to be the same size.

If your friend is a red-footed tortoise, you’ll have to resort to other ways of sexing your tortoise (see below).

The Shape Of The Upper Shell

In some breeds of tortoise, you can get an idea of gender by looking at the shape of the carapace or the upper shell.

The Color Of The Shell

Overall, male tortoises tend to have more brightly colored shells than females. For some species, males will have brighter shell colors to attract females during the mating season.

The Shape Of The Plastron

The plastron is a name for the underbelly of a tortoise or the underside of its shell.

One way to sex a tortoise is to check if the plastron is concave or flat.

Females will have a flat plastron since they need more space to lay their eggs inside their shells.

The male’s plastron is concave to prevent him from slipping when he’s on top of the female during mating.

Sometimes the female’s plastron won’t be completely flat – but if it’s flatter when compared to another tortoise, then you’re probably dealing with a female.

Female tortoises typically have shorter and more stubby tails than males, who have long tails.

While there is no predetermined length of a tortoise’s tail, you will notice that males have long tails that move from side to side.

Female tails are very short, usually shorter than the end of a Q-tip.

The Shape Of The Notch In The Shell

Another way to determine the sex of your tortoise is to look at the back of their shell, just underneath where the tail comes out.

Male tortoises have a notch shaped like a “V” on the backs of their shell, which accommodates the tail and helps them keep a comfortable position during mating.

The notch, or scute, forms an angle that is wider and more open than in the female.

This wider angle allows the male tortoise to move his tail more freely.

Females have a notch at the back of their shells, too, but it’s shaped like a “U.”

A female’s scute will form a tighter angle than the male’s, which provides her with extra protection.

The exact shapes of the notches vary a bit by species, so take into account several factors (such as the tail, the plastron, etc.) before deciding for sure on your friend’s gender.

The Length Of Their Claws

Male tortoises will have longer claws than females.

Males need long claws to fight when claiming or defending their territory: they also use their claws during mating rituals.

Glands Under Their Chin (Males Only)

If you have a male tortoise in mating season, you may notice some enlarged glands underneath his chin.

These glands can be a bit sticky, particularly during the mating season.

Other Useful Tips for Sexing a Tortoise

The following will also help throughout the process.

How To Predetermine The Sex Of A Tortoise

You can also influence the sex of your hatchling tortoises by adjusting the average incubation temperature of the eggs.

The same types of tortoise eggs that were incubated during higher temperatures produced female tortoises.

And the same can be seen in turtles too.

For instance, Sea turtle eggs incubated in a lab at low temperatures produced males, as well.

Researchers identified critical temperatures for both sexes to help with species conservation efforts.

Perhaps these temperature differences could be one of nature’s ways of evening out the sexes!

Interestingly, incubation temperature determines the sex of other reptiles: most turtles, some crocodiles, and some lizards, too.

How To Handle A Tortoise When Checking its Gender

When you want to check your friend’s plastron, don’t turn them on their backs – this is very stressful for tortoises.

Hold your friend in both hands and raise them so that you can see underneath.

Just because they have hard shells doesn’t mean they can take rough handling. Move very slowly with your pet – these animals don’t like to be rushed!

If your tortoise is too heavy for you to lift, try lifting your friend slightly off the ground and then get down low to peek underneath.

When checking the shape of the plastron, you might not be able to tell how flat or concave it is just by looking at it.

Try feeling the underside of your tortoise (gently), as your hands can be more useful sources of information.

Make your checks as quickly as you can. Tortoises don’t like to be held in the air as they feel vulnerable, so put your friend down and return them to their usual environment as soon as possible.

If You Get Stuck

If you are totally stuck as to what gender your tortoise is, here are two more ideas for you.

If you know the breed of your tortoise, look at pictures online to compare your friend with other members of their species.

Photos are very useful when comparing tail length, for instance. You can look up male tails and female tails and compare them that way.

Of course, you could go to your vet for some help.

Check before you go to make sure your vet is familiar with reptiles.

If your vet isn’t used to working with these types of animals, they should recommend someone to you who can help.

Another thing to consider is that your tortoise will need to be fully mature. You might not know what sex your tortoise is for years, though!

So, no point in being in a hurry 😊

If your vet can’t help, you could contact your local zoo or aquarium and ask for professional help.

If you aren’t able to bring your tortoise in, take photographs of the tail and the lower shell, as these two factors are the most obvious signs of a tortoise’s sex.

Why Sexing a Tortoise Is Important

It’s important to know the sex of your friend for several reasons.

If you plan to breed your tortoises, it will be much easier if you know how many of each gender you have.

Having too many of one sex or the other can make breeding difficult, as your tortoises might not be so enthusiastic.

Knowing the number of males and females will prove useful if you need support from other keepers of tortoises.

Female tortoises who are breeding will require extra calcium for healthy eggs, so you’ll be able to adjust their diet.

And if you don’t want your tortoises to breed, knowing their genders can enable you to separate males into one group and females into another group.

Your group of tortoises will have their own dynamic, which is easier for you to handle if you know which ones are male and which are female.

Some species of tortoise are more territorial than others, so several males together could present problems as they can fight each other, causing them a lot of stress.

You can put females in with your males to help them calm down, but you’ll want to have enough females.

Too few females will mean your males will still fight – they’ll compete for the females’ attention.

A good ratio for a group of tortoises is at least two female tortoises for each male.

And if you can keep males in different enclosures, that’s even better.

There are eight different ways to sex a tortoise.

And most of them relate to size, in some way or another.

Nevertheless, do become familiar with your species and be aware of the individual deviations that may relate to them.

Besides, there are certain species that do not follow the typical pattern.

And if in doubt; ask your vet.

That will ensure you get it right!