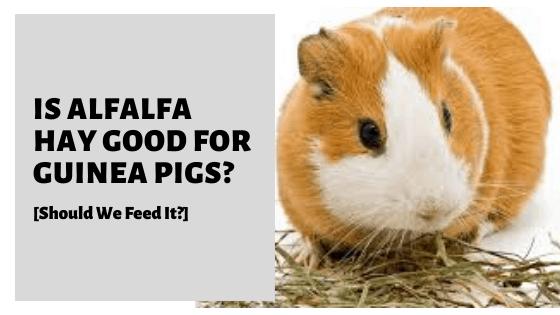 If you have discovered Alfalfa Hay then you may be wondering if it is safe, healthy and even a preferable food source for your Guinea Pig. Its packed full of vitamins and minerals, and Hay of course should make up the majority of a Guinea Pigs diet. But should we feed it? I decided to conduct some research into the topic and here is what I have been able to find.

So, is Alfalfa Hay good for Guinea Pigs? It is generally safe and healthy to feed a Guinea Pig Alfalfa Hay. It is a great way to support and improve their nutrition. It provides a lot of calcium, vitamins, minerals, protein and fibers that support their digestion and support their dental health. However, it is advised to feed Alfalfa infrequently and/or in smaller quantities and it should not make up the majority of a Guinea Pigs diet. This is because overfeeding it will supply too much nutrition and can cause obesity and weight management problems.

Alfalfa Hay is therefore most suitable and beneficial to a young growing Guinea Pig or during particular phases whereby extra nutrition is required – like to a female during pregnancy.

Let us now take a closer look at Alfalfa Hay. Specifically, what it is and its nutritional content.

We will then take a look at the health benefits and any risks of feeding this as a major component of your Guinea Pigs diet.

What Is Alfalfa Hay?

Alfalfa Hay is a specific type of grass. It is actually part of the legume and pea family and is native to warmer temperate climates. Sometimes you may see it called “Lucerne” , particularly if you live in the United Kingdom, South Africa, Australia, or New Zealand.

Alfalfa is recognized as a premium food source because it provides the most nutrients when compared alongside other hay sources.

It is particularly high in energy and as such is used for a variety of animals including horses, dairy cows, beef cattle and sheep.

With its high energy and nutritional quality, Alfalfa Hay is predominately used for growing animals, breeding animals, and those that are underweight and struggling to consume enough nutrition. A prime example of this is following illness, injury or infection.

Alfalfa in particular is high in energy whilst also being more palatable than grass hays. As such, you can soon see why it can be problematic when given to your Guinea Pigs in excess.

It is abundant in plant proteins, chlorophyll, carotene, calcium, and other trace minerals. It is also provides a lot of the B Vitamins, along with Vitamin C, D, E, and K. It also contains Phosphorous and Zinc.

As you will likely know already, Guinea Pigs require a lot of hay and experts recommend that they should consume as much as 80% of their diet from this food source.

While Alfalfa Hay seems like an appropriate solution to fill this requirement, consider that it can actually be too calorie dense and contain too much fiber for them.

Alfalfa hay should therefore be limited and used within specific contexts.

Instead, the most popular, recommended and safe hay for regular feeding is Timothy Hay (I actually get my supply in bulk for a great price on Amazon).

This is better suited to a Guinea Pigs needs and will allow them to eat ab libitum (as much as they want and require) without posing any risks to their health.

As it is generally less palatable, your Guinea Pig will also not overeat.

Your Guinea Pigs diet is paramount to their health and preventing illness; how you feed them will ultimately be reflected in their happiness and well-being.

Traditionally, Alfalfa Hay is used to feed working Horses. This is because of their huge requirement for energy and vitamins/minerals like Calcium which ensure they remain strong and powerful.

For a normal, healthy Guinea Pig, if you over supply Alfalfa Hay they can run into a range of negative side effects and symptoms.

This can include but is not limited to weight gain, intestinal issues like colon obstruction and bloat. (source)

With that being said, Alfalfa Hay can be a great addition to your Guinea Pigs diet. You just need to ensure that you provide it in measured and limited quantities.

There are also some other cases whereby you can increase the amount fed or it is even preferably to regular Timothy Hay.

It is particularly effective if your Guinea Pig has lost a substantial amount of weight (like following illness), or if it is being fussy and refusing to eat.

Other great contexts include a young baby Guinea Pig that is growing or for a female during pregnancy (when they require more energy and access to nutrients).

Alfalfa does contain benefits when fed appropriately to your Guinea Pig. Due to its high fiber quantity, when an appropriate amount is provided it can support their digestive system and help them to extract nutrients from the rest of their diet.

Additionally, Alfalfa is great at regulating and preventing a Guinea Pigs teeth from growing out too long and large.

Chewing it gently grinds away at their teeth and ensures they are reduced. As a Guinea Pigs teeth continuously grow throughout their life, if this is left unchecked it can become painful and dangerous for them when they eat.

Another way you can use Alfalfa is as bedding. Its naturally very soft and Guinea Pigs are known to enjoy it in this context.

However, again do not use this type of hay exclusively for bedding. You do not want to your Guinea Pig to have the opportunity to, or too much access to eating it.

The best way to feed Alfalfa hay is to add small amounts to their feed. Start once per week and then work your way up over time. It is always preferable to start with very small amounts and see how your Guinea Pig responds.

Viking Farmer is the Alfalfa Hay brand (available on Amazon) that I was recommended by my vet for my Guinea Pigs. If you are looking to get some, this is the one I recommend.

Risks Of Too Much Alfalfa Hay

As this article has stated, Alfalfa Hay is nutrient and energy abundant.

The clear risk therefore with overfeeding Alfalfa Hay to your Guinea Pig is over-nutrition which will lead to obesity and weight management issues. For a Guinea Pig this weight can be hard to reduce, and it also adds stress to their small and delicate frame.

Another aspect to be concerned with is the high calcium content. Guinea Pigs have a low Calcium requirement and they are prone to bladder stones which can form with Calcium excess.

They struggle to excrete calcium and if it persists for too long and remains unopposed, issues with their digestive system.

With these risks in mind, it is important that you limit Alfalfa Hay consumption. More is not better for them and in fact the opposite is true. A little goes a long way.

Alfalfa Hay can be a great, wholesome addition to your Guinea Pigs diet. It should never replace Timothy Hay nor should it ever be overfed.

In unique circumstances, it can prove to be particularly effective and an ideal feed. Ill, Baby and Pregnant Guinea Pigs are perhaps the most appropriate.

Even then, you should monitor how much and when it is provided, and be sure to reduce consumption when the Guinea Pig returns to a more stable state.

Ultimately, with Guinea Pigs, food is fundamentally important. It is imperative that you look after the health of your Guinea Pig by feeding them correctly and appropriately.

Good quality Timothy hay is an absolute must.

This is why I shop for my hay from Amazon, a trustworthy suppler where I purchase in bulk at a discount.