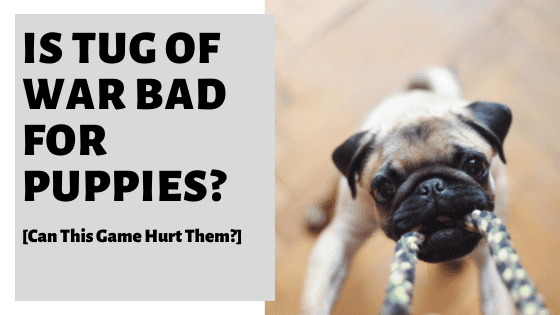 Part of the joy of getting a puppy is that they’re bursting full of energy and want to play all the time. Playing games is a great way to help your pup expend some of that energy while also spending high-quality time with them. But what about tug of war? Can or even should you play it while they are still young? Here is all you need to know.

Puppies are playful creatures, but they also aren’t aware of the risks of injury and pain when playing.

That’s why it’s up to you as the owner to understand which games are safe and which are not, particularly at the different stages of life.

And for Tug of War, there certainly is a time when and when you should not play it.

This is generally not the game for young pups.

That being said, it can be introduced and can have its benefits once they develop a little.

And while it may seem a little on the aggressive side, Tug of War actually encourages bonding and can be used as a means of appropriately training them.

It can be a great way of introducing and reinforcing commands with them.

So with this all in mind, let’s delve a little deeper into the game and all the considerations you should take into account.

Is It OK To Play Tug Of War with Your Puppy?

Experts recommend waiting until your puppy is at least six months old before playing Tug of War with them. After that age, this is an excellent game to play with your puppy. It keeps them engaged, and it gives you a perfect time to reinforce commands.

Puppies learn a lot about the world by chewing, tugging, and biting things.

They use their mouths to explore tastes and textures, helping them learn what’s safe and what’s not.

Playing Tug of War is a way puppies and dogs entertain themselves and their opponent. It doesn’t matter if that’s with a person or another dog.

When your puppy reaches six months old, teaching them Tug of War is an excellent way to build your bond with them.

Tug of War involves a lot of eye contact between you and your puppy. As well as getting up close and personal.

Another benefit of playing this game is it’ll help stop your puppy from chewing on furniture and clothes.

Especially if you use it as a redirection tool with rewards built in after playtime is over.

And help in teaching commands and rules to your puppy.

Plus, it’ll help burn off some of the energy puppies are famous for having.

Therefore, preventing poor habits from developing due to lack of stimulus.

Though, a word of warning, make sure you pick a toy designed for Tug of War.

For example, one that has a handle for you to hold and a mouth-sized toy at the other end for your puppy to tug on.

This best-selling one from Amazon is ideal!

Although a rope toy might be an obvious choice, it might not suit your puppy. Puppies are still learning full control of their mouths and teeth.

Sometimes their teeth get caught between the rope fibers and rip out teeth.

Plus, your puppy is at risk of swallowing any loose fibers. And that could lead to digestive issues or compaction.

And lastly, do consider that some breeds or misbehaving puppies might not suit Tug of War.

Most puppies tend not to be aggressive, but if your puppy is, this game isn’t ideal.

And you should avoid it if you notice aggressive guarding behavior in them.

Can You Hurt A Puppy Playing Tug Of War?

Unfortunately, it is possible to hurt your puppy playing Tug of War. Puppy mouths, jaws, and teeth are still developing until they reach a safe age. To prevent any dental damage or injury, it’s important to match a puppy’s pulling strength.

Although there are many benefits of playing Tug of War, it’s vital to understand the damage that can cause.

A young puppy’s teeth and jaw are still growing and developing. A puppy won’t be out of its teething phase until they’ve reached six months old.

At this stage, their baby teeth should be replaced by adult teeth.

However, it’s important to realize that a puppy’s jaw still isn’t set at this age. And it won’t be until they’re ten months old.

Your vet even may be able to advise when you can look to introduce this game; they can advise on when your puppy’s teeth and jaw are ready.

Even then, when you play Tug of War with your puppy, make sure to always match their pulling strength.

Never pull harder than they are; otherwise, you run the risk of causing permanent damage. Tugging too hard can result in jaw and bite problems in your puppy.

You’ll need to remain cautious, and if you feel like they’re pulling too hard, it’s best to stop the game.

Also, be mindful of their teeth getting stuck in the toy (especially if it’s fibrous). If you need to remove the toy, be gentle when taking it out of their mouth.

Better Games To Play With Your Puppy

Luckily, there are plenty of other games to keep your puppy happy if Tug of War isn’t for you. Games like Fetch, Hide and Seek, and obstacle courses are perfect for your energetic puppy.

It’s understandable if you’d prefer to keep Tug of War for when your puppy is a little older. It might not suit your dog’s current age or temperament.

That’s why a game such as the classic Fetch is a better option for you both. And it has the bonus of helping train your puppy to follow commands. And learn its own name.

You can let your puppy pick its own toy and bring it to you. After you throw it, tell them to go fetch and offer lots of praise as they follow your instruction.

When they reach the toy, keep calling their name to teach them to bring it back to you.

This will help your puppy learn their own name, return when you call them, and retrieve things.

Naturally, the first few tries will have some slip-ups. But puppies learn fast, so stick with it giving lots of love, treats, and praise.

A variation of Fetch is Hide and Seek. Get someone to hold your puppy as you hide. Then you can start calling their name while telling them to Come.

This is another way to encourage your puppy to follow commands as well as learn both of your names.

Plus, it engages their sense of their smell as they use it to help find you. Once they have a grasp of using their nose for help, you can try hiding a treat for them to find.

Creating obstacle courses for your puppy to navigate is a fun game for both you and your puppy.

It doesn’t have to be anything special, and you can create one in the house or outside in the garden.

All you need are objects like an awkwardly placed table and blankets. Guide your puppy around the course with treats, offering praise when they finish.

Agility games are great for improving your puppy’s coordination and confidence.

And helps keep their mind and body stimulated.

When Can You Start Playing Tug With Your Dog?

It’s best to wait until your dog until their teeth and jaws are properly developed. Once they’ve passed this age, you can introduce Tug of War to your dog. It’s ideal if your dog already knows the ‘drop it’ command to stop a dangerous game.

When you’re starting to introduce Tug of War to your dog, it’s important to lay down some rules with them.

Choosing a particular toy that you only play Tug of War with teaches your dog what game you’re ready to play.

As mentioned above, pick a toy that is suitable for this style of game.

Also, choose a toy long enough to prevent any accidental nips when your dog readjusts their grip.

Teach them you’ll be the one to start and stop the game and discipline them if they try to instigate a game themselves.

Some dogs can get overly excited when they see the game’s toy.

They start jumping at you and start tugging on your clothing and hands out of impatience. Or try to grab the toy to get the game started.

Train your dog to sit and stay calm until you’re ready to start.

When you want or need the game to end, make sure your dog will follow the Drop It command. And understand that once the toy is gone, the game is over.

Teaching your dog to ‘drop it’ is especially crucial if you feel the game is taking an aggressive turn. If your dog starts to show aggressive body language and behavior, it’s time to stop.

Aggressive signs in your dog include a stiff, high tail and pulling their lips back over their teeth.

Even if your dog is playing Tug of War with another dog, still watch for these signs. And stop the game before the signs get any worse.

Tug of War can be an entertaining and rewarding game for your puppy.

However, being mindful of your puppy’s age and temperament is important to ensure there’s no injury to them or you.

In fact, it is typically best to wait until they are at least six months or your vet gives you the go-ahead to start.

Luckily, there are plenty of other enjoyable games to play with in the meantime if your pup isn’t quite ready!