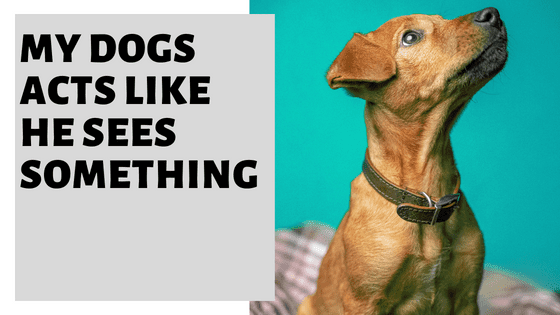 You might have noticed that your dog acts like he sees something when you can’t see anything yourself. It’s pretty bizarre and a little concerning, right? But is this normal? Why may a dog even do this, and is it something you need to investigate or even be worried about? Here are the answers to these questions and more.

So, why do dogs act like they’ve seen something? Your dog may have heard or smelled something strange, and he is trying to locate the source. Or it could be that your dog simply wants your attention. It may even be a sign that your dog is suffering from fly-snapping syndrome (snapping at things that aren’t there). In rarer instances, a medical problem can be the cause.

As you can see, there is not one definitive reason why dogs may act in this way.

Making it a little more challenging to categorically be sure.

You may have your suspicions as to what it may be at this stage, but you likely need a little more information to conclude them.

So, let’s now do that – delving into these reasons in further detail.

Then we will look at how you should respond.

Reasons Why Your Dog Acts Like He Sees Something

Your Dog Has Heard Something Strange

Dogs have hearing that’s way more powerful than ours.

In fact, dogs can hear about four times the distance that we can: up to 0.6 miles away (1km).

So even though his sight isn’t as good as yours, it’s entirely possible that your dog has heard something you haven’t.

If you suddenly notice your dog staring in a particular direction, it might look creepy to you, but there could be a valid reason for it.

Your dog will naturally fix his gaze on the spot where he feels the noise is coming from.

Other ways to tell that your dog has heard something strange are:

Note: Some dogs hardly react at all. They may be staring into the distance and not doing much else, so it very much depends on your breed of dog and his personality.

Your Dog Has Smelled Something

Dogs also have an incredible sense of smell.

The distance at which they can pick up a scent depends on the wind and weather conditions, but in perfect weather, dogs have been reported to smell people or objects from as far as 12.4 miles (20km)!

Depending on what he has smelled, he may look fixedly in the direction he thinks the smell is coming from to see what it is.

If he senses danger, he will be even more likely to want to locate the source and keep an eye out to protect you.

Your Dog Wants Your Attention

If your dog stares out the window and you go over to him and give him cuddles, he may start to associate this behavior with good results.

Dogs who don’t get enough attention are prone to seek ways to get what they want, so you may have inadvertently created a pattern that causes your dog to stare at things that aren’t there.

Of course, there’s a simple solution to this: discourage the behavior by keeping your dog entertained and stimulated in healthier ways (see below).

Your Dog Has Fly-Snapping Syndrome

It could be that your dog has fly-snapping syndrome: this is when your dog suddenly snaps at the air a few times while continuing to look straight ahead.

You’ll probably see your dog with a fixed gaze and acting like he sees something even though there is nothing there.

You may even see your dog raising his head and extending his neck just before he starts snapping his jaws. Sometimes dogs with fly-snapping syndrome raise their heads and extend their necks without snapping their jaws at all.

According to some vets, this behavior can come from a neurological disorder such as epilepsy or a partial seizure.

It isn’t yet known whether fly-snapping syndrome is hereditary or not, but it could be a result of canine epilepsy as well as other problems.

Eye floaters are another cause of fly-snapping syndrome. Your dog may have floaters in his eyes (called vitreous floaters), and he is confusing the black spots he sees with flies.

Other Causes of Fly-Snapping Syndrome

Sometimes compulsive behaviors are thought to cause fly-snapping syndrome. These behaviors could start happening because of:

If you suspect fly-snapping syndrome, get your dog checked by your vet as soon as you can.

Your Dog Is Hallucinating

Sometimes fly-snapping syndrome isn’t the only time your dog can see things that aren’t there.

Other times your dog could be hallucinating because he’s been intoxicated. Foods like coffee or chocolate are harmful to dogs and can make them hallucinate.

Pills and medications can also cause similar effects, so keep any medication safely locked away.

If you think your dog may be hallucinating, get him to the vet as soon as possible.

Your Dog Has Canine Compulsive Disorder

Canine Compulsive Disorder (CCD) is the doggie version of our OCD.

CCD can cause your dog to engage in repetitive and other compulsive behaviors, such as snapping at things that aren’t there or even staring into the distance when there’s nothing to be seen, heard, or smelled (see above).

Fortunately, there are various ways of minimizing these behaviors (see below).

What Should You Do If Your Dog Acts Like He Sees Something That Isn’t There?

If your dog acts like he sees something that isn’t there, you can try different strategies depending on the cause of his behaviour.

If Your Dog Has CCD (Canine Compulsive Disorder)

If your dog has Canine Compulsive Disorder, there are several things you can do to help:

If Your Dog Has Epilepsy

If your dog is diagnosed with epilepsy, one of the symptoms of a seizure is staring into space. Be prepared to recognize the signs of a seizure so that you can take preventative action as soon as possible.

Seizures are not always accompanied by dramatic foaming at the mouth or twitching. There are also ‘silent seizures’, which can be harder to spot.

Some signs of a silent seizure are:

Seizures can also be caused by:

Note: Some active ingredients in tick and flea collars can cause seizures in dogs.

If Your Dog Is Looking Around Frantically

What To Do First

If your dog looks around frantically and you can’t see anything there, consider the following, in this order:

Note: Looking around frantically can also be a sign of nystagmus (see below).

A Word On Nystagmus

Sometimes a dog looking around frantically can be a sign of nystagmus (involuntary eye movements).

Nystagmus is common in older dogs, but it can also be caused by:

You may suspect nystagmus if you see your dog moving his eyes in one of two ways:

Nystagmus is usually a sensory system problem that provokes a lack of balance in your dog’s head and body.

Sometimes a dog with nystagmus will start walking in circles or moving his head around.

Take your dog to the vet for a diagnosis if you suspect nystagmus, as it’s essential to check what caused it for proper treatment.

If Your Dog Has Fly-Snapping Syndrome

If you suspect your dog has fly-snapping syndrome, get him to the vet as soon as possible for a diagnosis.

Some dogs with fly-snapping syndrome were diagnosed with eosinophilic gastritis (EoG), a rare disease of the stomach when the stomach becomes irritated.

EoG can be successfully treated using a hypoallergenic diet and medications such as prednisone.

Note: Fly-snapping syndrome can sometimes present the same signs as pain or anxiety, so many symptoms overlap, according to this study.

You may see other signs in addition to your dog’s fixed gaze and snapping, such as:

If you see any of the above signs, it’s even more important to get your dog to the vet, as he may be suffering from a painful visceral medical condition.

As you can see, a dog acting like he has seen something can be caused from something entirely innocuous all the way through to something more severe; like a medical issue that needs medical intervention.

So, a final note; if you are unsure or do suspect that your dog is suffering from a medical condition; do take them to a vet.

Get them checked over – besides, it’s always worth it if you are unsure. For peace of mind at the very least.

Here are some of my other dog behavioral guides you may be interested in: