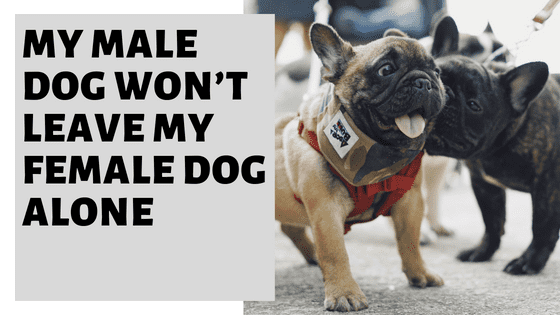 You’ve got two dogs. A male and a female. And they get along. Perhaps too well. At least your male dog is a little too interested and keen on your female dog. Sound about right? Well, if you find yourself in this position, you’ve come to the right place. Today, I am going to be breaking down how (and why this happens) and exactly what you can do about it.

So, why won’t my male dog leave my female dog alone? There are several reasons why a male dog won’t leave a female dog alone, ranging from the female being in heat to a desire to play. Other times a male dog is simply protecting his territory or expressing jealousy or boredom.

As you can see, it’s not so simple.

It will require a little investigating on your part.

Perhaps you’re lucky, and you know what it could be already – or at least have an idea.

But chances are you don’t.

So, let’s delve deeper into the reasons to help you get a better idea as to what it could be before turning to how you should respond!

Why Is My Male Dog All Over My Female Dog?

Your Female Dog Is in Heat

The most common reason for a male dog to not leave a female dog alone is that the female is in heat. If both dogs are intact, they are simply following nature’s directives.

When your female dog is in heat, she’ll give off pheromones that tell your male dog she’s ready for mating. You’ll want to know the signs of heat so you’re prepared to help both dogs (see below).

How To Tell If Your Female Dog Is In Heat

Here are some signs your female dog is in heat:

The Stages Of Heat And How Long They Last

Here are the stages of heat and how long they last:

Note: Even in the anestrus stage, your male dog may not want to leave the female alone: she is still giving off low levels of hormones. Some females have a stronger smell than others, and some males have a particularly sensitive sense of smell.

If your male dog doesn’t leave your female dog alone even if she’s spayed, Ovarian Remnant Syndrome could be the cause.

When your female dog is spayed, the uterus and ovaries are removed. However, sometimes pieces of ovarian tissue can be left behind, which will still produce estrogen: some female dogs will even go into heat.

Although she won’t be able to get pregnant, she could still produce enough pheromones to excite your male dog.

Your Male Dog Is Protecting His Territory

Dogs are by nature pack animals – but they are also territorial. Your male dog may be protecting his territory from the female dog.

If you notice your male dog bothering your female dog only in some situations, such as if she goes for a particular toy or a part of the house, he could be displaying territorial behavior.

Your Male Dog Wants to Play or Is Jealous

Sometimes your male dog simply wants to play, especially if he’s much younger than the female dog.

Or perhaps your male dog has lots of energy to burn, whereas your female dog is more sedate and relaxed.

Sometimes a dog will mount another as an invitation to play or as a show of who’s top of the pecking order (a show of dominance).

Your male dog could also be jealous.

Does he bother your female dog when she is near you or another person he loves?

Do your dogs compete for your attention?

Do they bother each other at feeding time or when it’s time for bed or snuggle time?

Does one dog try to get the other one away from you?

It could be your male dog is jealous of the attention you give the female.

Your Male Dog Is Bored

Like children, when dogs are bored, they will find something to do, and you may not like it.

Your male dog could be bothering your female dog out of boredom or lack of stimulation (mental or physical).

If boredom is the cause, there are simple solutions (see below).

How Do I Calm My Male Dog Around My Female Dog?

You can help calm your male dog in several ways: with a menthol spray, extra exercise, individual playtimes, or getting him fixed.

Use A Menthol Spray

You can use a menthol spray or jelly (such as this from Amazon) on your female dog’s tail to help mask the scent of her hormones.

Apply the spray several times a day when your male dog is around the female.

Before you do this, though, here are a few essential tips:

Give Your Male Dog Extra Exercise

Keep your regular walking schedule for both dogs, but when walking your male dog (separately), make sure he’s getting a long enough walk for his age and breed.

You want him to have spent lots of pent-up energy before coming back home to the female.

Play With Your Dogs Individually

Play with your dogs separately while the female is in heat.

While playing with one dog, keep the other in a separate area with chew toys or other distractions until it’s their turn.

Play with your female dog outside in a fenced-in area and supervise her: you don’t want her running off to go after passing male dogs.

Try not to walk her in public places while she’s in heat, as she’ll be a distraction for other male dogs in the area.

Make sure you keep a good balance of equal playtime for both dogs so that they don’t get jealous (see above).

Consider Getting Both Animals Spayed

Both dogs can benefit from getting spayed, as there are many long-term benefits (in addition to the tension created by hormones), such as:

Speak to your vet about your options.

It’s best for females to be spayed before their first heat, but you can still have her spayed if she’s already started going into heat.

Note: Your male dog will probably still react to female dogs in heat, but his reaction will usually be more subdued and less stressful for him. Keep him away from females in heat as a precaution.

How Do I Get My Male Dog To Leave My Female Dog Alone?

You can try a few things to get your male dog to leave your female dog alone. However, some require more time and patience than others. You can get your dogs fixed, provide separate playtimes and areas in your home, or consider a boarding kennel for the male dog while the female is in heat.

Get Your Dogs Spayed

As I mentioned above, you can get both dogs spayed, though your male may still be interested in your female sexually out of habit or because he can still smell traces of hormones.

Orchestrate Playtimes For Both Dogs

If you suspect jealousy is the problem, arrange playtimes so that you play with both dogs together as well as separately.

Choose set times to be with each dog, and stick to a routine so that they’ll know what to expect.

Give the other dog something to do while it’s not their turn, such as a puzzle toy or a treat.

Make sure you give the other dog a distraction before they try and steal attention away from the other dog. You don’t want to reinforce problem behavior.

Note: Be sure not to ignore a jealous dog that wants attention, as this could make the jealousy worse.

Be Mindful Of Your Dogs’ Different Needs

If there is a significant difference in energy levels or age between your two dogs, keep this in mind when planning activities with them.

For your younger or more energetic dog, make sure you’re providing long walks to burn up energy.

For both dogs, try scheduling playdates with doggie friends who have similar energy levels or ages.

Doggie playdates can be very useful if you’re also dealing with jealousy or territorial behavior (see above).

Consider Separating Them For Short Periods

You could give your dogs a break from each other by:

If you own both a male and female dog, hats off to you.

I know; I’ve been there.

You find yourself in all sorts of positions and conundrums, like your male dog not leaving your female dog alone.

But as you can see, there are numerous things you can do.

So give those suggestions above a try hopefully, you should soon find the obsession starts to wane. At least to more healthy levels!