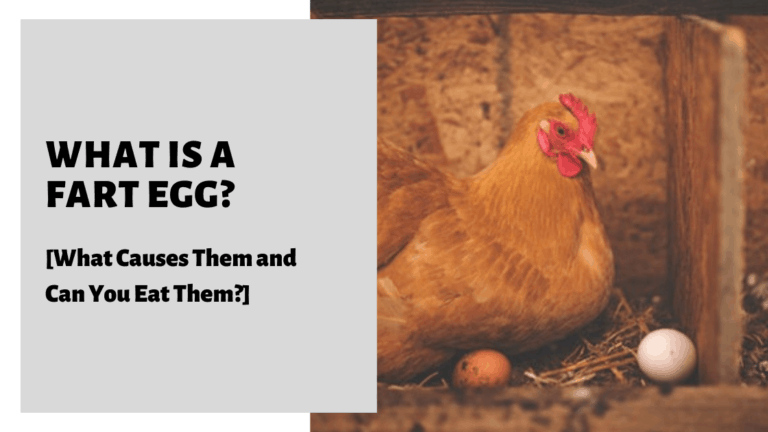 If you keep chickens, then one of the peculiar yet amusing discoveries you may experience is fart eggs. But what are they exactly? What causes them and are they safe to eat? I decided to conduct some research into the topic. I would like to share this information with you here today.

So, what is a fart egg? A fart egg is a small, yolkless egg laid by a hen. They are much smaller than regular eggs and are commonly laid in the early and final stages of a hen’s reproductive cycle, along with during times of stress.

Fart eggs have a number of different names, so you may see them referred to as ‘Fairy’, ‘Rooster’, ‘Cock’, ‘Witch’ or ‘Wind’ Eggs.

Each of these is often used in a different region or has been used at a different time throughout history. For example, Fart Eggs are generally the name used in the US.

Let us now take a closer look at this fascinating occurrence, before we explore whether or not we can, or would want to eat them.

Fart eggs develop when a hen’s body starts to form an egg before the yolk is released from her oviduct. For this reason, only the white (known as albumen) lands within the shell.

Fart eggs are common with young hens, but they are not always produced by birds of this age.

Fart eggs are very small in size. They are generally the same size as a ping pong ball and round in appearance.

However, they can also be much smaller than this. They are nonetheless, considerably smaller than a regular egg and you can usually easily identify and distinguish them.

The shell is usually darker in color. This is because less eggshell is required in its creation, meaning that more pigmentation is concentrated in a smaller surface area.

Instead, normal eggs can be produced by hens of the same age. Ultimately, it depends on the hen and the circumstance.

Can You Eat A Fart Egg?

Fart eggs are entirely safe to eat. They will of course, not be providing you with the yolk which in my opinion, is very delicious.

Moreover, it is in fact the yolk that carries much of the nutrition of an egg; being abundant in Vitamin D, Vitamin B6, and Vitamin A, Folate, Iodine, and Selenium.

All of which contribute to the healthy development and growth of bones and teeth, general bodily functions, and our general well-being.

Nonetheless, the white can be booked and are fat and cholesterol-free, and are high in protein.

You can use these egg whites in baking, or whisk them up into a small omelet/scrambled egg. They won’t be as creamy mind you!

Plus, you’ll need to consider that a fart egg is considerably smaller so will be less likely to fill you up!

Another use for them is to wash them, remove the bloom and let them naturally dry out. From there, you can use the eggs as a decoration within your kitchen.

Keeping all your chickens’ fart eggs in a decorative bowl can be a nice ornament.

Are Fart Eggs A Problem?

If your hen is producing one, or several fart eggs, you do not need to worry. It is not harmful to your bird nor does it indicate a health problem with them.

Instead, it is important to understand that they are a natural by-product of the reproductive process. They can happen to any hen whilst they are young (or old).

Fart eggs can also vary from hen to hen, so while some may be larger and paler, others can be smaller and more colorful.

Either way, there is absolutely nothing to worry about!

Fart eggs are just one of those interesting events that can occur when owning chickens. If your hen starts to lay them, do not worry.

They’re normal, even if they differ in appearance and size.

While you can eat fart eggs, consider you will not be getting the yolk. They’re not as nutritious but they are great for baking.

Failing that you can always collect your hen’s fart eggs and create a kitchen ornament from them.

What Is A Fairy Egg?

A Fairy Egg (also known as a Fart Egg – they are the same thing), is a small egg laid by a hen that does not contain any yolk. They are produced at certain stages of a hen’s reproductive cycle and will be passed just like a normal egg.

Can You Eat A Fairy Egg?

Fairy eggs are perfectly edible. However, consider that they do not have any yolk so they will not taste the same or be as nutritious. You will need to cook them, and boiling or poaching are the best ways to do so. Essentially, it is like eating an egg white.

Can A Fairy Egg Hatch?

Fairy eggs are unable to hatch because they have not been fertilized. Instead, you can either eat them or even create some decorative house ornaments out of them.

Looking to learn more about egg-laying in chickens? If so, my following guides may be of interest: