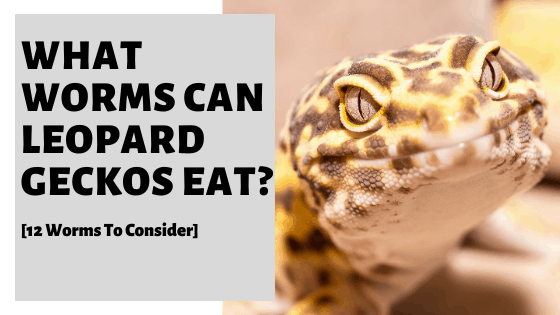 As insectivores, leopard geckos thrive on a carnivorous diet of bugs and grubs. You’ll often see recommendations for worms as part of this. But a little bit of research quickly shows that they are not all the same. Different worms have very different nutrient profiles.

Naturally, we begin to question what worms are appropriate or to feed altogether.

So, I decided to research the various worms to discover their suitability. I’ll be providing my research in this one easily accessible list.

Below, you can find out precisely what worms you should, and should not, be offering your leopard gecko:

Leopard geckos can typically eat Butterworms. They should, however, do so in minimal amounts. Butterworms have the highest fat content than other worm types and can easily result in excess weight gain if overfed.

It’s important to consider that there are instances of butterworms being regurgitated by some leopard geckos.

It has been speculated that this could be because they are quite acidic, are challenging to break down due to their strong mandibles, and for some leopard geckos, they are difficult to swallow.

Therefore, butterworms should be fed at your discretion.

Juvenile Leopard geckos can eat Buffalo worms, but adults should not be fed them. This is because buffalo worms are very small in size.

Leopard geckos can eat earthworms on the basis that the earthworm was purchased from a reputable store that specializes in feeders for reptiles.

Wild earthworms can carry parasites, which will be passed on to your leopard gecko if fed.

Equally, earthworms that are sourced from bait stores are often coated in various compounds, including sawdust, powdered oatmeal, and ‘vegetable materials’ or are covered in pesticides. All of which can harm a leopard gecko.

Leopard geckos can eat Calci worms but should only do so 2-3x per week. Calci worms are rich in calcium, protein, and fat, so they do not need to be provided as frequently.

While highly nutritious, not all leopard geckos will take to them and may refuse them if served.

They are also quite expensive and sometimes a challenge to source.

Leopard geckos can eat grub worms so long as the worm is not too large for the gecko to eat. A good rule of thumb is that the grub worm is not larger than the gecko’s throat.

Leopard geckos can eat hornworms, but should only do so in moderation and as a treat (1-2x per week) due to their lower protein content and to prevent any preferences developing.

Hornworms are, however, low in fat and generally easy to digest – so they are one of the better worms to feed.

They also are handy for dehydrated or sick leopard geckos due to their higher water content.

It is important to note that hornworms should be appropriately sized for the leopard gecko; so that they are easy to consume without the risk of choking.

Leopard geckos can eat mealworms. They are one of the best types of worms to feed these lizards!

Mealworms are a great feeder because they do not move, bite, make any noise, or carry any strong odors.

They are nutritionally quite balanced and not too high in fat.

The amount of mealworms to feed depends on the leopard gecko’s age and size, with two mealworms for every inch of a gecko’s total length being a good rule of thumb to follow.

Leopard geckos can eat Morio worms on occasion, so long as the head is cut off before serving. Otherwise, the Morio worm could bite a leopard gecko inside and cause injury.

Equally, it comes advised only to feed gut-loaded and calcium dusted Morio worms and ones that are not too large for the crested gecko to consume safely.

Lastly, Morio worms are relatively high in fat so should not be used as a staple feeder.

Leopard geckos can eat waxworms, although they should do so rarely and in limited amounts. 1-2 worms per week at most is advised.

This is because they are naturally much higher in fat than other worms.

Overconsumption of waxworms can result in weight gain in your leopard gecko.

It has also be known for leopard geckos to take a particular liking to waxworms and develop a preference for them, refusing other foods.

So, they need to be fed infrequently.

Geckos can eat red worms so long as they are sourced from a reputable reptile feeder store.

Not all geckos will be interested in eating red worms, and some have been known to ignore them when offered altogether.

However, they are generally relatively low in fat and moderate in protein, so from a nutritional perspective are suitable to feed.

Some leopard geckos can eat superworms, but even then should only do so as a treat; a couple of worms per week is more than enough.

Superworms are higher in fat than other worms and can lead to weight gain if over-provided.

It’s essential to be aware that superworms can be hard to digest for some leopard geckos. There are even reports of vomiting, regurgitation, and internal damage by some owners.

Some leopard geckos may even refuse to eat superworms for this reason.

Therefore, superworms should be fed at your own discretion, and it is strongly advised to rip them prior to feeding.

Leopard geckos can eat silkworms, and they generally enjoy eating them too. Silkworms are also very low in fat and provide decent amounts of protein, making them a great choice of feeder.

Feeding Worms To Your Leopard Gecko

As you can see, not all worms are the same.

They range quite a bit in terms of nutrition.

But they range in other ways too; size, structure, taste, and their aptitude of bite.

As such, you must do your research ahead of feeding any new worm to your leopard gecko.

And start slowly. See how your gecko responds.

The same can be said for any food or other insect you plan to offer.

Speaking with a vet is a good approach too, and getting their advice on what is most appropriate for your gecko is a better approach to take.

Equally, it would be best if you were particularly careful about where you source your worms and other foods.

They should be bred and raised with reptile consumption in mind.

And along similar lines, wild worms should be avoided for the most part.

Who knows what they could be carrying and what this could do to your lizard!

Finally, it’s essential to consider the age and size of your leopard gecko.

Young leopard geckos should be fed smaller worms and less of them altogether!