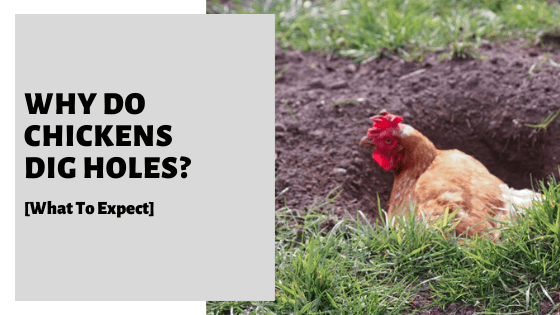 Chickens are interesting birds. You’ll likely know this if you have ever watched your flock. They are in many ways a never-ending source of amusement. One thing that seems to baffle most chicken keepers is why digging holes seems to be an obsession with our girls. Just what is so entertaining in the dirt? I decided to dig deep into the research to find out for good. I’d like to share my findings with you here today.

So, why do chickens dig holes? The main reason chickens dig holes is because it is an instinctual behavior. They feel an internal drive to do so. There are also benefits to digging. The most common being to be able to take a dust bath, to stay cool in warmer temperatures, and to sometimes create a safe place to lay eggs. Hole digging is entirely normal and while there are some practical ways to reduce it, will never be able to be stopped entirely.

If you are new to chickens you will soon be surprised at how deep they like to dig and how often they seem to do it.

What is interesting is that there are many animals known for digging holes in the dirt. However, the majority of the ones who do this have feet which seem made for scooping out dirt.

Chickens should be far from effective at doing this when we consider their physical limitations. They have clawed toes that are skinny, and that are just not made for groundwork. But they manage to still do it, and do it well.

Let us now explore this behavior more deeply, looking at the primary causes before looking at some practical solutions to limiting it if this is what you are looking to do!

Why Do Chickens Dig?

Chickens dig for several different reasons, these include:

This hole digging instinct is so innate that chickens often will go at the dirt for several hours on end until they accomplish what they set out to do.

If you are standing behind a chicken when they are digging, you are likely going to get a a mouth full of dirt!

However, one of the primary reasons for digging, is so they can give themselves a dust bath.

While it may sound far from refreshing to us humans, most chickens are not fans of water, and they much prefer to do their bathing in dusty, dry conditions.

Although it may seem that a chicken would come out of their dust bath dirtier than before they started to dig, that is not the case.

When chickens are rolling around in their hole, the dirt removes nasty insects like mites, lice, fleas, and other various bugs that crawl onto them.

Bugs like these are suffocated by the dirt as the chickens roll around. It also helps to remove dead skin cells, grass, and coop bedding that gets under the feathers.

Once out of their bath, chickens give themselves a good shake, fluff their feathers, and look nice and clean again.

Other animals do something similar. Pigs will bathe themselves in mud to get themselves clean. Elephants will also use dirt to cover themselves as a deterrent to flying insects, especially if they have no access to deep water where they can bathe.

Why Do Chickens Bury Themselves In Dirt?

Chickens bury themselves in dirt to cool themselves, or to get rid of crawling insects.

Many chicken owners can testify to the fact that once their chicken has dug a nice hole, they will then work to cover themselves in dirt.

They can do this in several ways, but most chickens flop all over the place to really work the dirt into their skin.

Some of them will actually take dirt into their mouths and contort themselves as far back as they can go to drop the dirt far down their back. Chickens have even been known to drop a mouthful of dirt onto the backs of other members of the flock.

Dirt is cooling to a chicken. For them it feels good to have the damper earth at the bottom of a hole rubbed into their skin.

After all, chickens do not have much covering to protect them from the sun and heat. If you watch them go through this process, you will notice that they rarely take dirt from the surface to rub onto themselves.

Crawling insects are a major nuisance to chickens. While they can shake themselves or fluff their feathers to dislodge flying bugs, ones that adhere to the skin take more work.

Dirt worked down into their skin helps to get rid of common parasites that attach themselves. The ones that dirt does not loosen end up suffocating when they are covered in the dirt.

Although any responsible flock owner will treat their chickens for mites and the like, some still manage to survive.

If you have ever had an itch that you cannot scratch, you can imagine how it feels to a chicken to have an insect moving around on their bodies that they are unable to reach.  It is also common to see chickens peck at one another.

Though this can be done out of boredom or bullying, chickens have excellent eyesight when it comes to something edible, and they are quick to eat a bug they see harassing members of their flock.

Why Do Chickens Scratch The Ground?

Chickens scratch the ground to forage and be social among other reasons.

Like digging holes, foraging is an innate behavior in chickens.Proof of this can be seen even in day old chicks.

The moment you put them into their enclosure, the first thing they do is head for their feeder and scratch around in it.

If you are familiar with chickens, you know that you can feed them more than they can possibly eat, and yet they are scratching at the ground.

This was the only way for non-domesticated chickens to survive once upon a time. With no one around to provide them crumbles, they were forced to dig for their supper, literally.

Grubs, worms, snails, and various other “yummy” treasures were unearthed for meals.

Today’s chickens still have this behavior and will eat any interesting tidbit they come across. Anyone who has free range chickens know this to be true when they look at their garden. Seeds often get unearthed, as do seedlings without strong roots.

Another reason they scratch the ground is to interact with the rest of the flock. Chickens are very social creatures.

Sit around and watch a flock for awhile and you will see that they move around together, dig holes together, chatter at each other, and scratch together. This is not only good for their health, it also helps them to bond with each other.

Getting ready to make a nest is done by scratching the ground. Chickens make little “test” scratches until they find the perfect location that suits their needs. They also do the same thing when looking for a place to dig holes.

Why Do Chickens Peck The Ground?

Chickens love to peck the ground, and again, this is a behavior that is pretty constantly done throughout the day.

There are two primary reasons why they do this:

Do Chickens Dig Under Fences?

Chickens will sometimes dig under fences. This usually occurs if a chicken wants to get something that they can see on the other side.

However and like most of us, chickens prefer to take the path of least resistance. If the dirt in the main area of their run is hard and difficult to move, they will look for places to dig that do not take as much work.

When dirt around the fence line is soft, chickens will choose to dig there every time. Unfortunately, this can make your girls vulnerable to predators.

If your chickens refuse to stop digging under the fence, you will need to bury your fence at least a foot below ground. This is a good idea anyway to keep away any animals that may harm your flock, especially if they do not go into a locked coop at night.

How Do I Stop My Chickens From Digging?

There is no way to stop chickens from digging completely since it is an instinctive behavior.

However, what you can attempt to do is stop them from digging in certain areas.

The most common objection to the digging is that it destroys gardens. I am personally familiar with the damage a chicken can do to a beautifully planted garden. Even with a six-foot fence around the coop, certain girls hop it the moment they are let out in the morning. Then they make a beeline for the gardens.

Putting a fence around the garden is one option. Keep in mind that if you decide to erect a fence, chickens can fly for short distances so it will need to be reasonably high.

Some chickens will not bother to jump a fence at all. Even a two-foot fence does not seem to be worth the effort when there are easier pickings to be found.

Height will really depend on what your chickens are like. The additional benefit to a high fence is the reduction in the number of late-night visits to your garden by deer, rabbits, and other wildlife.

If you are able to do so, motion activated sprinklers are effective at spooking chickens. This is one of the best sprinklers to buy from Amazon with hundreds of positive reviews.

This will stop your birds from digging in restricted areas.

There are also certain smells that repel chickens. You may have to use some trial and error to discover what your chickens dislike the smell of. Sprinkle or place some of the following in spots where digging is a no-no:

Having chickens is an experience from start to finish. They are entertaining, reduce the number of ticks and bugs in your yard, and provide nutritious eggs.

Like any other animal, they take commitment; both in time and work. But the rewards are there and they are great to keep.

While digging holes may be something you want to completely eliminate, this is instinctual to them. It will be impossible to ever be able to do safely do so.

Just remember that chickens need the comfort of digging holes and scratching at the dirt to keep them in good health, both physically and mentally.

Instead, its better to keep digging to a more confined place using the recommendations as outlined above.