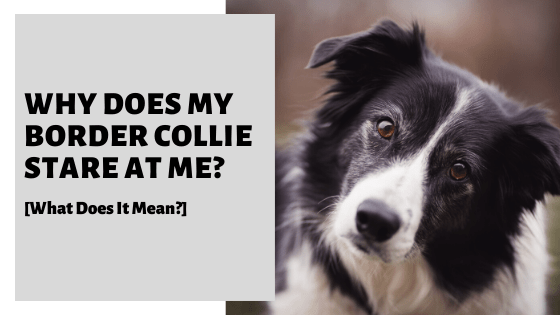 If you own a border collie, then you may have noticed them staring at you from time to time. But what does this mean? Why would they do this and is it anything to worry about? Noticing this behavior, I decided to spend some time finding out all I could about it. I will be sharing with you the findings from my research here today.

So, why does my border collies stare at me? A border collie will stare as a way to communicate with you. Staring is often used as a method to get something they want from you; such as some leftover food, to initiate play, or to get your attention. It is also used to study and better understand you, in an attempt to anticipate your next move. Staring is a natural tendency and innate behavior of border collies, a trait inherited from their herding heritage.

A dog staring at you can be quite intimidating; especially if you have only just noticed it or you are uncertain as to why they are doing so, to begin with.

Nonetheless, it is purposeful behavior that we can better understand.

Let us now take a closer look at the main reasons why a border collie will stare, along with whether it is in fact a bad behavior we should look to reduce.

Finally, we will consider some practical ways of stopping staring, if it becomes too overbearing or uncomfortable.

So be sure to keep on reading until the very end to get all the information you need!

Why Do Border Collies Stare?

This is largely due in part to their heritage as working and herding dogs.

The border collie was initially bred to herd sheep in the mountainous regions of Scotland.

As such, they developed ways and techniques of managing and moving large flocks of sheep.

To sheep, this meant a series of staring, barking, and specific movement patterns. The fear of a potential attack ensured they were directed to where they needed to go.

Equally, there was a strong requirement to be attentive and listen closely to the commands of the shepherd at any time.

While many border collies no longer live to work, (some still do), this tendency has never gone away.

Staring is therefore an inherited trait that has been passed down through generations. In fact, experts even believe it originated in wolves.

So, even though your collie may be out playing, or being more restful around the house, this instinct can kick in if they feel it would benefit them, or the situation in any way.

Often, staring is accompanied by a dominant, crouching pose.

This is a tell-tale sign that your dog is leveraging this innate behavior to attempt to better influence its surroundings.

This does not mean they are necessarily being aggressive or willing to attack; it’s more manipulative than anything else.

Alternatively, by looking directly at you, it’s a clear indication that they are attempting to better understand you.

Anticipating a command, listening out for one, or anticipating your movement before they react are all part of this process.

For example, during a game of fetch as their border collie is anticipating the ball to be thrown. Often, they crouch down until the ball leaves their owner’s hands before swiftly chasing after it!

Other Common Reasons For Staring

First and foremost, a border collie will stare to communicate. They may do this with other animals, dogs, people, and their owners. This is true of many breeds of dogs.

A common example is when a dog seeks the leftovers from dinner. All owners will have experienced this at some time or other.

Border collies are particularly cunning in this way; they know that a long, deep stare is likely to result in the ultimate reward – food!

But beyond food, this breed has a high requirement of physical and mental activity.

They are very intelligent and must remain stimulated the majority of the time to stave off boredom.

For this reason, border collies are known to quickly become fixated on different things, almost becoming obsessed, if they are left with little to do.

This could be on something in your home, such as shadows on the wall, or something outside like a bird.

They are also known to stare at balls and other toys, in the hope that you recognize they want to play.

Sometimes they will even pick it up and drop it at your feet, or use their nose to place it beside you.

It’s all about getting your attention and letting you know that they want some time with you.

Border collies love to work; and will let you know if they are not doing so. So, this will mean frequent outdoor activities to keep them busy.

So, if you notice your border collie is giving you the stare while you are relaxing around your home; it could quite easily mean that they want you to take them outside and give them something more energetic to do.

Essentially, you must be prepared to stimulate the intelligent mind of your border collie, or otherwise, you can expect a higher level of staring.

Thankfully it’s not usually aggressive, more in a questioning way like they’re asking ‘what is next?’.

Is Staring A Bad Behavior In Border Collies?

Generally and for the most part, staring should not be considered bad behavior and all dogs will do it at certain times to some extent.

The issue usually arises when a border collie becomes more dependent on the stare or attempts to excessively manipulate you and other family members by doing so.

While the level of staring can vary between border collie, and depends on certain factors such as age, context, and training, if it is persistent enough you may need to look into specific ways of dealing with it.

The majority of the time, a staring border collie is attempting to tell you something, better understand you, exercise, or get something from you.

It’s usually not a bad thing or cause for concern. You’ll often see bowing down or the use of the paw during these times which means their intentions are well.

However, if staring behavior is directed at other dogs, consider that this is more likely to be for dominance reasons, and may even have more aggressive undertones as they look to protect you and your family.

If you notice this happening, you may need to introduce socialization training to help your dog.

Equally, if you notice other behaviors alongside the stare, such as barking or jumping, then you may need to consider a training regimen too.

Border collies can become ‘bullies’ of those around them; attempting to control others, even including people, which is likely the consequence of their herding heritage.

Thankfully, border collies are not an aggressive breed to people; in fact, they are actually very affectionate dogs, typically good around kids and even strangers.

How To Stop Your Border Collie From Staring

If you begin to feel that your border collie’s staring is becoming a bit of an issue, then there are some practical things you can do.

We’ve already mentioned training, and this is perhaps one of the best things you can do to correct it long-term.

Positive reinforcement should always be used, along with the teaching of basic commands.

If you can teach commands like ‘fetch’ and ‘roll-over’, these can be used as a way to quickly entertain your dog and prevent them from becoming stagnant and bored.

Alongside this, do invest in plenty of good dog toys.

You want to get your dog to need to think creatively, and this toy with its treat dispensing mechanism works great for this.

While border collies do have a need for a lot of physical activity; it is mental stimulation that can effectively calm them down and prevent staring from becoming too regular an occurrence.

But, it would equally do you well to take your dog out on regular walks. Hiking is particularly effective, along with letting them off the leash (assuming it is safe) and letting them have a run around to expend energy.

If you have an open backyard this is great too. Have a game of fetch or set up a small agility course for them to navigate.

The latter is great because they have to engage their mind too.

You do need to remember that staring is not inherently bad. It is their primary method of communication so it is not wrong nor should you ever attempt to prevent it entirely.

Staring is only cause for concern when it becomes dominant.

Border collies are known to stare. It’s what they do and it’s been a big part of their herding practices for generations.

Beyond this, staring is one of the main ways a dog can communicate with you and your family members.

As such, staring is not inherently a negative thing, and some should always be expected.

But, if you notice that it is becoming excessive, or other behaviors develop alongside such as barking and jumping, then there are likely things you will want to do.

Ensuring your dog is well socialized and trained from a young age are crucial, as is keeping them psychically active and mentally stimulated.

This is not a dog breed that likes to lie down and sleep all day.

Nonetheless, they make a great family pet; so long as you can keep them entertained and busy.

By doing so, staring should be less frequent – and only used when they want to get something specific, like some food off your plate!

What Does It Mean When A Dog Looks At You In The Eyes?

A dog will look into its owner’s eyes for three main reasons: to obtain good, to gather clues about our emotional state, and to gather information about what is happening in the environment. Dogs are one of the only species that look people in the eyes, and it is seen as a natural by-product of domestication by animal behaviorist specialists.

Should You Look A Dog In The Eyes?

Looking into your dog’s eyes infrequently or for short periods of time is known as ‘fleeting’ and is perfectly fine and safe to do. However, staring into a dog’s eyes is likely to scare and intimidate them. A dog will perceive it as a threat. Generally, it is not advised to look into a dog’s eyes for more than 3-5 seconds.