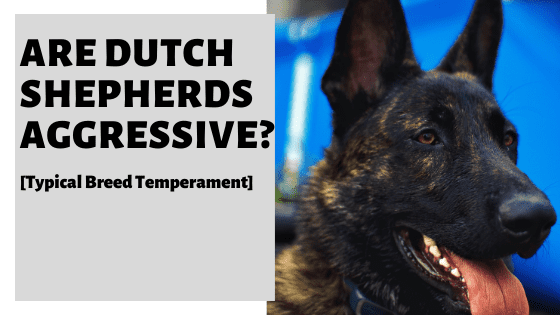 Dutch Shepherds are a fabulous choice when it comes to picking a working dog breed for you and your family. They are playable, loyal, obedient, and energetic. However, do you need to worry about them lashing out at visiting friends and family? Here is all you need to know.

So, are Dutch Shepherds aggressive? Dutch Shepherds are not typically an aggressive breed, but they can nip and snarl at strangers if they’re not trained and socialized sufficiently – particularly from the time that they are a young age. As working dogs, some herding behaviors are somewhat instinctive to the breed.

Chances are, this doesn’t quite cut it, and you still have some questions.

Especially if you are considering one for your next family pet.

So, keep reading to discover more about this breed, common aggression triggers, and what you can do to prevent it should you decide to eventually get one!

What Is The Typical Dutch Shepherd Temperament?

Dutch Shepherds are loyal, caring, and intelligent dogs. Bred to be herders, they have also made great police canines and guide dogs. They’re full of energy, love, and affection.

Originating in Norway, Dutch Shepherds were bred to herd, watch, and protect livestock from wandering off and from predators.

They are a rare breed to find and almost went extinct in the 1950s, after World War 2.

Between the modernization of farm technology, reducing the need for farm dogs, and the suspension of dog breeding, Dutch Shepherds, weren’t in demand.

Unfortunately, those that were already around during the ’40s and 50’s either starved or were shipped to be used for the German military.

Because they are a working dog breed, they have an abundance of energy that needs to be used up daily.

They are used to running around all day doing their farm duties and then remaining watchful during the night, guarding the family and farm.

Without this daily exercise, they will become easily bored, overweight, and depressed.

Without enough physical and mental stimuli, Dutch Shepherds will be more likely to misbehave and disobey their master.

Dutch Shepherds love to play, so they suit households with small children and are hardy enough to put up with the rough play that can come when children interact with dogs.

However, it’s important that this playtime is supervised to ensure that the dog doesn’t react poorly.

It’s also key to teach the child to be gentler with their pet which is why, if the child is under six years old, they both shouldn’t be left unsupervised.

Dutch Shepherds are easier to train than some other breeds.

But it will take time and consistency to assert yourself as the leader in their eyes.

They don’t readily give up control, like if they don’t see you as the true alpha.

Dutch Shepherds are very loyal and, therefore, protective of their families. Being a herding breed means they’re trusted to protect their livestock from poachers or predators. They are even known to be willing to sacrifice their lives to save their owners, which is what makes them great service animals.

They were even reportedly solely responsible for the livestock.

Farmers entrusted their Dutch Shepherd to bring sheep and cows out to graze, guard them, and then return them to their shelter each night.

Although the need for shepherding dogs isn’t as high as it used to be, this protective guarding instinct is still seen in modern Dutch Shepherds, making them great family pets.

Dutch Shepherds are incredibly protective of all the members of the family but are famous for creating a strong bond with one member of the household.

This is one reason why they make fabulous service dogs and police dogs.

They will sacrifice their own lives if they believe their family is in danger.

As with all dog breeds, socialization from an early age will massively help regulate their protective instincts. They will learn who is friendly and who isn’t.

Is It Safe To Leave My Dutch Shepherd Around Children?

Dutch Shepherds are great around kids and are voted 3/5 by the American Kennel Club for being child-friendly. They can be trusted to be gentle and caring with children.

Sometimes it can be a bit concerning to leave any dog alone with children, but Dutch Shepherds are regarded as being kid-friendly.

They are highly active and love to play with anyone, including children.

Dutch Shepherds are ideal-sized dogs as they won’t get trampled underfoot by running kids or knock over kids accidentally like some bigger breeds tend to do.

Because of the Dutch Shepherd’s natural herding and protective instincts, it’s thought that these traits help make them a great family pet for those that have children.

They will instinctively keep children out of harm’s way, much like they would for their livestock.

Additionally, they are hardy dogs and remain gentle and calm when roughly handled by children, especially those who don’t realize dogs have feelings.

However, it is important that Dutch Shepherds are supervised while they’re around children in case they become too energetic for the children or show signs of aggression.

No dog breed is exempt from becoming too frustrated with a child, resulting in a nip or growl.

Aside from monitoring your Dutch Shepherd’s behavior around kids, it’s essential to teach the children how to properly pet and play with their pet.

When Can Dutch Shepherds Act Aggressively?

Dutch Shepherds will act aggressively if they think their family is under threat. They may also respond aggressively to their owner, contesting the position of leader in the household.

Dutch Shepherds are protective and will respond in an aggressive manner to anyone they believe is an intruder. Therefore, early socialization is crucial.

It’s advised that you socialize a Dutch Shepherd as much as possible under the age of 20 weeks (about four and a half months). Let them interact with friends and family and other pets.

During this socialization learning period, they will discover which people and animals are friendly and accepted by their owners and family. They will also learn what normal behavior between family and their friends looks like.

Therefore, if their family reacts unusually around a new person or animal, they will know that this person isn’t welcome and will react aggressively to protect their family.

In An Attempt For Dominance

Dutch Shepherds are incredibly intelligent and are prized for their intelligence and their obedience. They regularly compete in obedience competitions.

With this intelligence comes a somewhat challenging behavior. Owners of Dutch Shepherds, especially male Shepherds, need to be firm and consistent with their training.

It’s important to stay as the alpha in a Dutch Shepherd’s eyes to keep them obedient and well-behaving.

If the dog doesn’t respect their owner as the leader of the pack, they will attempt to take the position of alpha of the household.

They will become aggressive to anyone who tries to challenge their authority and may nip or bite at them.

How To Prevent Aggression In Dutch Shepherds

Dutch Shepherds aren’t an aggressive breed but, if they’re poorly socialized, they will act out as a response to fear to everyone, including their family and other pets.

All breeds, not just guard dog breeds, need to be socialized, so they learn how to act correctly around the people and animals close to them.

Along with encouraging your Dutch Shepherd to interact with people inside their home, it’s also advised to train them to behave favorably while out on walks or hikes when they encounter strangers outside of their home.

As with most unwanted behaviors, consistent training is key to preventing them from happening again.

To help lessen the strain on keeping up with your Dutch Shepherd, you can train them to respond well to strangers on your walks and therefore allow them off the leash.

A handy command to teach your Dutch Shepherd is Recall. When your dog hears this command, they will return to your side.

This is a vital command to help prevent any aggressive situation from escalating between your pet and strange people or animals.

They may not set out to challenge anyone, but they may become startled and react aggressively as a defense mechanism.

Another helpful command for preventing escalating aggressive situations is Leave It. Sometimes Dutch Shepherds get hyper-focused on something or on a perceived threat.

By teaching them the Leave It command, they will learn to break focus and listen to your commands.

Dutch Shepherds want to please you, so training them with positive reinforcement will effectively curb any growing aggressive tendencies.

Dutch Shepherds are bred to work all day and to guard the farm and family at night.

This breeding means they have an abundance of energy that needs to be used up daily; 90-120 minutes (about 2 hours) daily is advised.

At the same time, getting them an abundance of toys, not keeping them restrained in a house all day, and giving them plenty of outdoor space to roam will do them well.

Dutch Shepherds are a rare breed to see, but they are an incredible addition to any family, especially an active family.

They are loyal, intelligent, active, and playful with all the whole family and will protect them at all costs.

They aren’t known as an aggressive breed and will only act out if they believe their family is in danger.

Or if they weren’t socialized properly when they were young.

So do bear these things in mind.

Don’t let this information necessarily stop you from proceeding to get one, but do plan ahead and accordingly.