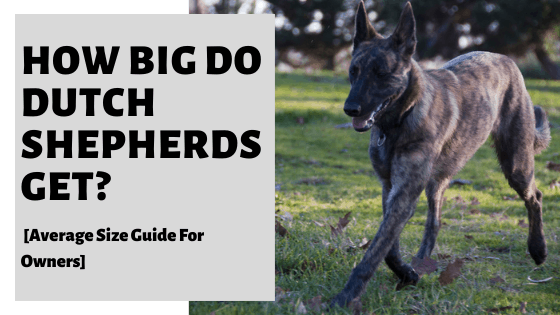 As their name suggests, Dutch Shepherds have long been used as working dogs. Herding livestock and other duties back in their native Holland. But how big does this breed get? What is considered sufficient space in relation to their temperament and final size? Let’s find out!

So, how big do Dutch Shepherds get? On average, Dutch Shepherds generally reach between 21 and 25 inches in height and weigh between 42-75 pounds. Males are typically slightly heavier than females. Either way, this breed is known for being slender in physique.

Dutch Shepherds have an aptitude for activity.

They are energetic, lively, and athletic, retaining a number of their traits and tendencies from the days that they were put to work.

As such, any owner of the breed should expect a highly alert dog that must be kept busy.

While they are not aggressive, they can herd and nip.

But thankfully, they are highly trainable and obedient – making them an excellent companion so long as their needs are met.

And in regards to their appearance and size, let us explore them further!

Dutch Shepherds are naturally slight and slender. This is mostly due to their desire to run and burn through a lot of energy, with the more active dogs of the breed being particularly lean.

And compared to their cousin breeds, the German or Belgian Shepherds, they are somewhat smaller even if they strike a resemblance.

Nevertheless, this is a medium-sized breed with a solid bone structure and moderate musculature.

Proportionately, they are well balanced – they have a deep and long chest, slightly sprung ribs, and powerful legs.

This dog possesses a wedge-shaped head (when viewed from above) and does appear somewhat elongated. They have triangular, erect ears.

It is the shape of the head, which is consistent with the rest of the body’s size, that can be used to tell the females apart from the males.

At What Age Is A Dutch Shepherd Full Grown?

The average Dutch Shepherd will reach their full adult size by 12-14 months of age. They typically grow much faster for the first 6 months and gradually slow down for the remaining 6-8 months of growth.

Here is a typical growth chart of growth, from young pup to adult dog:

Growth Of A Male Dutch Shepherd

Growth Of A Female Dutch Shepherd

As we can see, there is a clear distinction and difference between the sexes of the breed.

To those more familiar with the Dutch Shepherd, the sexes can clearly be told apart.

This can be seen both in the shape of the head and the build of the body.

Either way, this is a dog that does the majority of its growth early in life.

During particular growth spurts, they can gain an average of 1.5-2+ lbs./week.

There are some reports from owners that this dog can continue to fill out for several years beyond the first year of age.

Putting on bulk, especially around the chest, shoulder, and neck regions of the body.

Although this is not always observed in every dog; and changes have been reported as somewhat marginal and very slowly occurring.

Plus, weight can go either way depending on diet and exercise at different life stages.

And there is something else to consider here too.

For the Dutch Shepherd, puppyhood does not magically end around 1 year of age when they start to reach their more standard size.

And before this time, and in the early months of life, sufficient socialization and training and vital for this breed.

It is when they learn how to behave as an adult dog; knowing how to interact in different social situations, contexts, peoples, and environments.

It also gives them the confidence to act as disciplined dogs.

And for a herding dog by nature that is more protective and has a higher prey drive, you can expect puppyhood to particularly more important and somewhat challenging.

It takes a little more patience and consistency than in some other breeds.

So, for a Dutch Shepherd to developmental maturity and where we can define the end of puppyhood, you’re looking at around 2 years of age.

You can have a fully mature dog physically, but they still need to be closely managed for a further year.

Some owners even report that their Dutch Shepherds “go deaf” or “forget” what they learned within the first few years of life.

This is why consistent training based upon positive reinforcement must become part of the daily routine when owning this particular breed.

Due to their energetic personality and desire to run and move around, space is considered a must. Dutch Shepherds do not do very well in a closed, small apartment without any outdoor space.

These dogs need an active environment to keep sufficiently stimulated, both physically and mentally.

Otherwise, destructive behaviors will likely pursue out of boredom, and you will not have a happy, healthy dog.

Of course, there are always exceptions, and it may be possible to keep a Dutch Shepherd if you did live in a certain-sized apartment.

They are not large dogs, after all.

But you would need to be willing and able to take them outside very regularly, keep to a higher exercise schedule, and keep them occupied in the time that they are indoors.

For this reason, it is undoubtedly better to own a Dutch Shepherd if you own a larger property with a lot of outdoor space.

The more you can let them outside in a fenced or controlled setting, the better.

Just consider, however, this will impact their weight somewhat.

The more active dogs of the breed are known to struggle to retain their weight, even with additional food fed to support such activity.

This is just how the breed naturally responds; they are genetically hardwired to remain slim and agile.

The Dutch Shepherd should never look emaciated, but they do appear lean and somewhat skinny compared to some other breeds.

The exercise and diet a Dutch Shepherd gets can largely influence their size, for better or worse. Along similar lines, this particular breed’s weight can fluctuate quite a bit depending on these factors.

So, let us quickly touch upon their exercise and dietary needs required to keep them at a healthy weight.

For a Dutch Shepherd, the more exercise and activity they can get, the better (at least from their perspective).

And more exercise is generally better, so long as they are being fed sufficiently (more to follow) and not exercising to exhaustion.

Thankfully, as a naturally active breed, they know how to regulate their own needs and will stop when they have had enough; if given the space to do so, of course (such as in a yard or garden).

And exercise is very good for them, helping them to strengthen their muscles and keeping their minds occupied.

When the time comes to rest, they will. They know this instinctively.

In terms of structured exercise, such as a daily walk, at least 1 hour per day is perceived as the minimum for an adult dog. 2 hours or more would be preferable.

5 miles or more has not been unheard of from some owners.

And this is all on top of other exercise, such as fetch and other forms of play.

One thing to consider is their age.

Up until the age of 6 months, a Dutch Shepherd should be carefully monitored and not exercised too much.

This is because their bones and joints are more vulnerable as they are growing.

5-10 minutes of structured exercise in the form of a walk is a good rule of thumb to follow here, although they will likely want to keep active beyond this.

Despite being lean, a Dutch Shepherd needs to eat to retain its weight.

They should be fed a high-quality diet for an active mid-to-large size dog.

Speaking with a veterinarian or even a professional nutritionist for advice comes strongly advised.

Especially because the needs can differ so much depending on the age and activity of each dog.

It is imperative with this breed to tailor their diet to their own needs. Monitoring their weight and ensuring that you cannot see or feel their ribs is essential too.

All the while considering they are narrow framed and on the lean and slender side.

The Dutch Shepherd is classified as a medium to large size breed, although they can vary quite a bit from dog to dog.

Either way, this is a slim and slender breed and one that has a keen desire to remain busy.

As such, Dutch Shepherds are not a dog for everyone.

While they have a range of ideal traits: affectionate, loyal, obedient, and trainable, they are quite hard work.

Especially to new dog owners. Or even those who cannot provide an environment that is conducive to their nature.

For those more experienced with dogs and those willing and able to take care of and meet the needs of an intense natural working breed, they can be an excellent addition and companion.

Just consider they will keep you busy.

They are shepherds, after all.