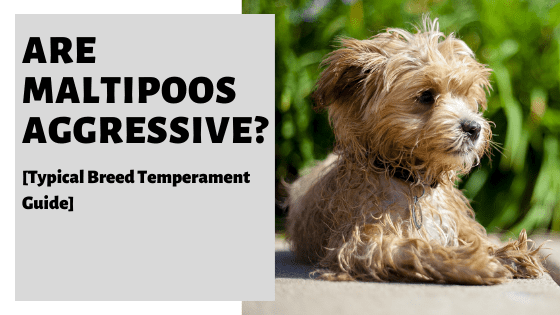 One of the factors involved in deciding which dog breed to choose for your family is their personality. Will they be loyal? Will they be mischievous and hard to handle? Besides, learning about what temperament is normal for a particular dog breed is essential before getting them. An adorable and loving breed are Maltipoos, but are they an aggressive breed? Here is what you need to know.

So, are Maltipoos aggressive? Maltipoos aren’t an aggressive breed on the whole, but they can act out react aggressively without sufficient or with incorrect training, if improperly socialized from a young age, or if they feel vulnerable and in danger. For the most part, this is a fun, loving, and playful breed.

If you look at a picture of a Maltipoo, it’s almost impossible to consider them as a potentially aggressive dog.

And it’s unlikely for the most part.

But it is also possible.

And it can be a problem for some owners.

As we shall see in the next few sections.

So read on to learn more about the typical temperament of a Maltipoo and how to combat aggressive tendencies, should you decide to get one, and were they ever to arise.

What Is The Typical Maltipoo Temperament?

The typical temperament of a Maltipoo is gentle and lovable. They crave human companionship and enjoy playtime with their owners. They’re active and spirited dogs who love to interact with kids.

The Maltipoo isn’t officially considered a true breed but rather a cross between a Maltese and a Toy or Miniature Poodle.

Both of these breeds are loving and friendly, which can typically be seen in the Maltipoo.

They are a sensitive breed and love to play and cuddle with their owners.

However, because of their sensitivity, they are susceptible to developing separation anxiety.

So, they are best suited to homes where they won’t be left alone for long periods of time.

Maltipoos love to have fun and are able to match the energy of kids, making them a great family pet.

However, because of their size, it’s best to supervise this playtime, especially if the children aren’t used to interacting with a small breed.

Sometimes children can be too rough with their dog, and Maltipoos don’t have the best patience, which could result in them snapping at kids if they’re being too heavy-handed.

This is why experts recommend not to introduce a Maltipoo to a household with children under the age of 6.

It’s around this age that children can better understand that dogs have feelings and can be accidentally hurt.

Although they aren’t considered an aggressive breed, some Maltipoos find enjoyment in barking at everything they see. It doesn’t matter if it’s a passing bird or if someone new is entering their home.

Therefore, they wouldn’t suit a family living in a restricted noise area or someone who is sensitive to noise.

Even though this breed is thought of a lap dog, they tend to have lots of energy, so you can expect them to run around the house in spurts.

They only need a short walk a day (10-15 minutes) to maintain their healthy demeanor.

A short game of fetch in the park or backyard will be enough to keep your Maltipoo physically and mentally stimulated.

Without these stimuli, they may develop undesirable aggressive behaviors, including nipping, growling, and biting.

What Can Make Maltipoos Aggressive?

Although they aren’t an aggressive breed, this doesn’t mean Maltipoos can’t become aggressive. Poor socialization as a puppy will contribute to unwanted aggression as well as attempting to be the alpha of the household.

Socialization for all breeds is crucial to having a well-behaved adult dog. It’s important to let your Maltipoo interact with different people, whether young or old, and animals when they’re a puppy.

If you’ve recently gotten a Maltipoo puppy, start socializing them right away. They will soon learn who they can trust to be around their family and themselves.

They will begin to see how people and animals interact with them and their families. And therefore, recognize when their family doesn’t interact well with new people or strange animals.

That being said, Maltipoos tend to be loving and friendly to most people they meet. They definitely aren’t a very good watchdog for this reason.

Poor socialization in Maltipoos will encourage aggression as well as other unwanted behaviors, like fear of people and anxiety.

Because of their size, they can easily get overwhelmed by new people and act out as a fear response. Fear can make any breed react aggressively, and the Maltipoo is no different.

Another reason that your Maltipoo might start showing aggressive tendencies is if they’re attempting to become the alpha of the household.

They most likely will react aggressively when they feel like their authority is being challenged, for instance, when you discipline them.

It’s important to remain firm and consistent when training your Maltipoo to make sure they understand they aren’t the alpha.

An unfortunate cause of aggression is from any past trauma your Maltipoo may have experienced.

It’s helpful if you’re able to get a history of abuse when choosing your rescue Maltipoo.

Aggression in otherwise normal circumstances like refilling food and water bowls is a sign of past abuse.

This kind of behavior is called food guarding and is usually seen in dogs that were abandoned and were forced to scavenge for food.

They mistakenly think you’re trying to take their food from them instead of feeding them.

Illness affects each individual dogs differently, just like humans. Some become withdraw and suffer in silence.

Others respond with aggressive behavior like growling and biting.

If you suspect your Maltipoo is acting out because of illness, book a visit with your vet to see what solutions are available that will resolve their new aggression at the same time.

Side Effect Of Play

What can commonly happen, especially in playful dogs, is that they can become dominating during playtime. They may start out with mouthing, which can lead to full-on nipping and growling.

Monitor their behavior when they play with you and other household pets for this behavior.

If your Maltipoo is trying to dominate your playtime or that of another dog by becoming aggressive, it’s time to step in and let them know who’s in control.

How To Prevent Aggression In Maltipoos

To prevent aggression in Maltipoos, it’s important to train and socialize them from an early age. If aggression occurs when they’re older, returning to basic training will help curb their growing undesirable behavior.

No matter the breed, consistent training and discipline are key to maintaining a well-behaved and obedient dog. Maltipoos are loving and intelligent, so they are relatively easy to train.

All dogs have a ‘pack’ mentality, and Maltipoos are no different. They need a leader to follow and will happily do so when the leader has been established.

However, without consistent training, they will try to challenge your authority in an attempt to take control.

If your Maltipoo is acting out because it’s trying to establish dominance, there are a few steps you can take to reassert control.

When bringing your pet out for a walk, make sure that you leave and enter the house first. This will show them that you are the alpha and in control.

At home, remain at a higher level than your pet to establish rightful dominance.

Don’t lower yourself to their level, like sitting on the floor with them. And prevent them from settling on the couch or bed until they stop acting aggressively.

When a Maltipoo is attempting to dominate the household, one of the things they can react aggressively about food. They may growl, nip, or bite at you until you feed them.

Using food as a reward for positive behavior is very common and can be used to efficiently curb aggressive tendencies.

Make sure to reward your Maltipoo with a treat when they behave favorably to keep encouraging that good behavior.

However, if your Maltipoo isn’t responding to your training properly, it may be time to enlist the help of a professional trainer.

Along with consistent training, socialization is crucial to a good-natured Maltipoo.

Because of their size and natural proclivity to anxiety, they need to learn how to behave around visitors and guests to your home.

Make sure to let them engage with different pets and people of all ages. Though it’s important to supervise them with young children as this is where accidental nips and bites can occur.

Maltipoos aren’t inherently an aggressive breed and have no real guarding instincts (which can commonly lead to aggression), so it shouldn’t be a primary concern when training them.

Remaining consistent with training and exposing them to different people and animals will prevent any developing aggression tendencies from worsening.

Maltipoos are adorable and make the ultimate companion for empty nesters and families alike.

While they are small, they are certainly energetic, intelligent, and love to play.

They aren’t thought of as an aggressive breed, but if a Maltipoo is acting out, it’s likely the result of insufficient training, discipline, and socialization.

Picking these things up will help any owner curb these unwanted tendencies.