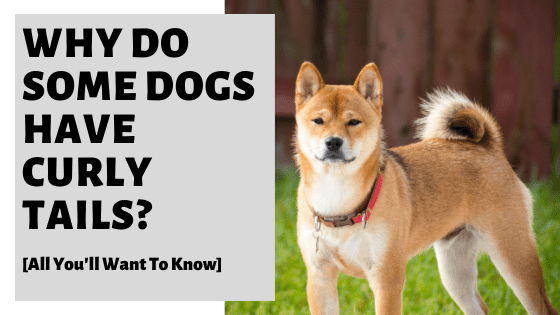 As we all know, dogs’ tails come in all shapes and sizes. Some are long. Some are short. You’ll find furry ones and not-so furry ones. Then there are the ones that have a mind of their own and, of course, the ones that curl! If your dog falls into the latter category and you’ve decided you want answers, well, don’t worry. You’ve come to the right place.

So, why do some dogs have curly tails? Whether a dog has a curly tail at all depends on its breed and its genetics. Or it could be to do with human intervention. Most of the time, though, it is due to that breed of dog’s evolution across the centuries. If a certain breed needed a curly tail for whatever reason, it would genetically evolve, so it had one.

But why would a dog ever need a curly tail?

That’s what we are about to get into.

So keep reading – it will all start to make sense!

Reasons Why Some Dogs Have Curly Tails

It simply is a physical trait of some dog breeds, which would have been brought about over time by that specific breed’s evolution.

Curly tails would have been caused by what is known as hemivertebrae.

This is where the dog’s vertebrae (the bones which form the spine) have fused together or become shaped more like a wedge.

A dog breed may evolve like this if there is a specific need for having a curly tail in their walk of life.

So let’s look at some examples.

Many curly-tailed dogs originated from places with colder climates.

Over time, these dogs will have evolved so that their tails curl, allowing itself to be used as a sort of warming device to rest on the dog’s nose.

Spitz’s, Spitz Hounds, Norwegian Elkhounds, and Huskies need their tails to be safely off the ground.

This is because, throughout the centuries, they have been used by humans to drag objects, like sleds, for example, across surfaces.

If their tails didn’t curl a safe distance above the ground, then they would likely be injured during every working shift.

Each dog breed will have a curly tail for a specific reason that aids their life.

It is always important to remember this, but humans have also had a part to play.

In the past, and still, till this day, some humans have implemented a process of artificial evolution into the breeding process so that the dogs they produce have curly tails.

This is purely to breed dogs with curly tails for aesthetic value.

If you breed a dog that isn’t supposed to have a curly tail so that it does have one, then someone might pay a fair penny for it.

This is because it would be an unusual and unique physical trait for that specific breed that really it’s not supposed to possess.

Which Dog Breed Have Curly Tails?

Many of the most well-known dog breeds have curly tails, but some of the other, perhaps more obscure ones, also have them.

Take a look at the list below and see if you can find your loyal friend there!

A curly tail on a dog is perhaps not so rare, after all!

Can You Straighten A Dog’s Curly Tail?

There are surgical procedures, like tail carriage, that possess viability for straightening a dog’s curly tail. However, ultimately, this isn’t a good idea for a number of reasons, especially those concerning the potential detriment to your dog’s health.

A lot of dog owners aren’t too fond of their loyal friend’s curly tail.

Negative perceptions are that it doesn’t look natural or simply isn’t to the owner’s aesthetic standards.

There are medical procedures available, although you might want to reconsider pursuing them.

Such a procedure could cause an extreme amount of pain and subsequent suffering for your dog.

Tail carriage, for example, can strain your dog’s tail and consequently leave a throbbing pain.

These procedures are considerably expensive and also perceived as unethical by wide scopes of the community.

You won’t find one that is ethical because they all inflict pain and all change your dog’s nature irrevocably (unless you find a procedure that can curl it again).

For a dog’s tail to be straightened, the surgeon will need to fracture, amputate or reposition bones in order for the procedure to work.

All of which will obviously inflict pain on the dog.

You might think that pain reduction medication can surmount this obstacle.

However, all you’re really doing there is creating another problem.

The chemical composition of long-term medication will eventually have a negative health impact on your dog.

If you’re thinking like this, and I really hope you’re not, ‘oh, the dog will be fine with the pain. They’ll get over it. It’s what I want for the dog’s appearance, and at the end of the day, I won’t be feeling any pain’.

A tail-altering procedure can lead to significant changes in your loyal companion’s behavior.

They may become easily irritated, biting and scratching their tail.

So if the dog isn’t behaving, it means they’re not happy.

An unhappy dog will eventually lead to an unhappy owner; it can be a really challenging situation to overcome

The best procedure to pursue is no procedure.

Let it all hang curly.

Your dog’s tail is an integral part of not just its identity but also its charm.

Curly tails are there because they have their uses.

Generally, a dog’s curly tail may help it with balance.

Or it can be used to alert humans to threats.

After a medical procedure, the dog’s tail won’t maintain the same natural movement it once had.

It will consequently be much less useful.

Are Curly Tails Bad For Dogs?

It depends. Curly tails are often evidence of the intelligence possessed by natural evolution. They have curly tails because they are meant to, so there’s nothing wrong here! However, if your dog’s tail suddenly curls when it is not known to, then there may be an issue.

A curled tail won’t produce any pain for a dog that is meant to have it.

As mentioned above, it is an integral part of them.

An integral part of the body that brought about pain would be a problem.

However, some dogs gain a curly tail during their lifetime, and this can be attributed to pain, especially any soreness found in the dog’s back and spine.

The best thing to do is monitor your dog.

If their tail starts to curl and they are showing signs of pain, like limping or whining, etc., then take them to the vet.

If your dog naturally and has always had a curly tail, don’t worry.

It does not have a genetic disorder.

Owners often think that if their dog has a curly tail, then it has a curved spine.

This is not the case.

Whilst the tail is an extension of the spine, a curly tail is often not connected to any vertebrae issues.

Another suspected cause or side effect of a curly tail is back issues.

If your dog develops a curly tail over time, then this could be related to back issues.

The best thing to do if you’re worried? You guessed it! Take a trip to the vets.

Should I Be Concerned About My Dog’s Tail Becoming Curly?

In most cases, no, you should not be concerned about a dogs tail curling, but you can never be too careful.

Determining any issues will depend on when your dog’s tail curled.

If it was born with a curly tail, then there’s nothing to be worried about.

It’s cases where a dog’s tail curls over time that you might want to investigate further. This is when there may be some kind of underlying problem.

So basically, if your dog’s breed specifies having a curly tail, no problem.

Additionally, if your dog is of mixed-breed, and one of its parents genetically possessed a curly tail, no problem here either.

If your dog isn’t supposed to have a curly tail and you walk downstairs one day and boom, there it is, all curled up, there’s no need to panic.

It doesn’t necessarily mean that there is an issue. For example, some dogs’ tails can curl as a result of overstimulation.

Diversity makes things interesting. Who would want to live in a world where dogs only had straight tails?

When you’re looking at your dog’s curly tail, remember, it’s taken many years of evolution for it to get like that.

And if you think there’s a threat, visit the vet!