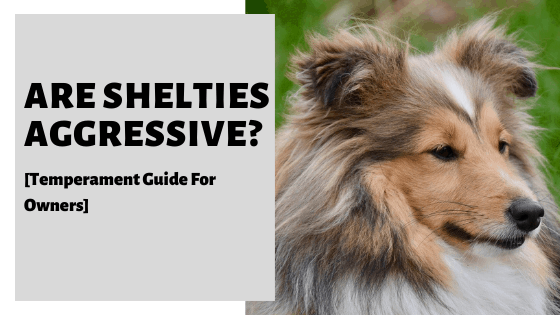 Shetland Sheepdogs, also known as Shelties, were originally bred to chase birds and sheep away from farmers’ fields. They also herd livestock in the harsh conditions of the Shetland Islands in Scotland. Nowadays, they are commonly kept as pets and companion dogs. But due to their origins, are they naturally aggressive? Do prospective owners need to take any behavioral tendencies into consideration or rule out getting the breed entirely? Here is what the research clearly shows.

So, are Shelties aggressive? Shelties are not generally aggressive, despite their heritage and being bred as working dogs. Instead, they are known for being affectionate, responsive, gentle and reserved. However, while they do get along well with people they are most familiar with, they have been known to be aloof with strangers, generally trying to avoid them. Equally, there is the chance that they can have a tendency to bark and even nip in an attempt to herd.

Nipping at the back legs sounds frightening, but it mostly occurs in sheltie puppies and those that have been trained not to do so.

For any breed of puppy, some nipping can be expected, along with some occasional play biting.

This is how they learn about their environment, just as us humans so with our hands.

Its important to always remember that nipping, especially from puppies, is not an act of aggression. Instead, its mostly a communicative tool and way to play.

Nipping usually resolves in time with this breed, however, its important to ‘nip this in the bud’ early to ensure that it does not continue into adulthood where it can become more painful and more of an issue.

This is where obedience training and socialization is important.

Nevertheless, while this breed may have chased small animals away and herded sheep, that was their job and this is all they did.

There is generally, no need to fear that this breed may be aggressive.

Shelties are rarely if at all aggressive towards animals, nor do they want to harm or cause damage, nipping is more of a tool that was used to help them in their former roles.

But, as an owner of this breed you will need to minimize this herding instinct. Otherwise you may find them attempt to chase smaller animals and even children.

In doing so, they will run around, bark, and nip. Its important that you do not let your Sheltie herd unless it’s in an organized herding class/situation.

Let us now take a closer look at the average temperament of the sheltie breed. We will also cover whether, considering their heritage, they are dangerous to own.

We will of course cover any potential causes and triggers of aggression in this breed, and some practical ways to ensure these behaviors do not occur if you did decide to get one.

Some people may be a little wary of Shelties, due to their origins, but there is generally no need to worry about aggression in this smart and affectionate breed.

Shelties become very attached to all of the members in their family, are sensitive, and have no issues with being alone throughout the day.

The breed may be too intelligent for their own good at times, which can cause some stubbornness. However, they do have a strong need to please.

In addition to being intelligent, Shelties are also an athletic breed and do really good in agility competitions.

One thing Sheltie owners will attest to is their affinity for barking. If you are looking for a quiet dog, then perhaps this breed is the one for you.

It is suggested that you teach your Sheltie at a young age that barking is not an acceptable behavior and it will not be tolerated. Your neighbors will thank you for it, especially if you live in an apartment or condo building.

Overall, Shelties are not a dangerous breed. However, saying that, any dog can be dangerous in certain situations.

Shelties are herding dogs and oftentimes will try to herd squirrels, rabbits, and small children. So, if your child is running away from your Sheltie, they could inadvertently trip and hurt themselves.

It is not recommended to let your Sheltie off leash when you are not in a safe, enclosed area.

As a breed, they are not aggressive, and are not going to attack anyone.

Even when faced with strangers, they are more likely to be shy and back away, than they are to try and get at them.

They are also good with other dogs and tend to get overly excited when encountering one, especially when it comes to another Sheltie.

They do have a nipping issue, and if left unchecked, it can become a problem. However, this is a rare occurrence and is generally due to the upbringing of the specific dog, and nothing to do with the breed at all.

Therefore, it is very much the responsibility of the owner to do all they can to minimize this behavior and to teach their dog that their former job, is no longer required.

Puppies of all breeds use their mouths when they are younger. However, most tend to grow out of it at a certain age.

Shelties to have a tendency to nip at objects, animals, and people, especially if not trained properly.

They are not known for biting aggressively or severely. Equally, any nipping can be reduced by ensuring that they begin training at a young age.

Because of the nipping, it is important to get your Sheltie into training and socialization as early as possible so that the behaviour doesn’t become a habit or turn from nipping into biting.

Dogs need to have boundaries and need to know which behaviors are acceptable and which are not.

In saying all of this, each dog is an individual and leads a different life, so it’s not to say that there isn’t a Sheltie out there who doesn’t bite.

The main reasons that a dog may start to bite is out of neglect and fear.

What Can Make Shelties Aggressive?

As a breed, Shelties are not aggressive, however, that isn’t to say that no Sheltie will ever be aggressive.

If their nipping habit is not dissuaded it could turn into a worse habit, causing biting and possible aggression.

Just like any animal that is domesticated, if they are brought up in unsavoury conditions, they have the potential for being aggressive out of fear and defensiveness for their lives.

There is a higher chance of this happening if the Sheltie has experienced trauma or abuse.

Shelties do not tend to have issues with aggression, but just like any dog have the potential to given the right environment, context and conditions.

There are generally eight reasons why any dog could become aggressive, and they include:

Shelties are not known for anxiety. However, there is the possibility that they could suffer with it, or an illness, and become aggressive.

These are the two most likely reasons from the list of eight.

How To Prevent Aggression In Shelties

Shelties, like most breeds of dogs, will do really good with early training and socialization.

Shelties are a breed of dog that likes to work and have a task to do. If their mind and body is stimulated, they are less likely to become bored and frustrated.

Shelties are easy to train and are very intelligent, however, they may try to test their boundaries to see what they can get away with. Don’t get frustrated with your Sheltie and stick with the training.

Of course, when a Sheltie is in a warm and loving family, they will be a happier dog and have a less likely chance of being aggressive.

They are a breed that likes to stick close to their family and will follow you from room to room, as well as cuddle whenever given the chance. At the same time, you need to set boundaries with your Sheltie and ensure that they are aware that you are in charge.

Shelties are one breed that don’t mind being home alone all day, while you are at work.

Once you are home though, they won’t leave your side and their full energy will come out. Allowing your Sheltie an outlet for their energy can be a positive decision, not just for aggression, but for having a healthier dog overall.

The breed is exceptional at agility competitions and you’ll often find them running around the obstacle course.

The activity is great at helping them to tire, both physically and mentally, staving off conditions such as boredom, anxiety, and aggression.

How To Limit Nipping In Shelties

Limiting nipping in shelties will require some work; but it is generally worth it if you have young children or you just want to minimize this behavior (which comes strongly advised).

Teaching, bite inhibition, which is the term used to describe the process of teaching a dog not to bite and nip, can be achieved with the following approaches:

Shetland Sheepdogs, or Shelties, are not aggressive dogs. The breed is a loyal companion who is loving, compassionate, and affectionate with their family.

When it comes to strangers, they tend to be more on the shy side but will come around once they get to know you.

Shelties are good with children; however, they have been known to try and herd them, along with smaller animals.

Never leave a Sheltie alone with a small child, just to ensure the child’s safety. Shelties also get along with other dogs, especially other Shelties. So, dog aggression is also not an area in which you need to worry.

There are eight main reasons for why a dog may be aggressive, though the Sheltie doesn’t really have any of the behavioural issues.

There are two conditions, anxiety and illness, that could affect a Sheltie’s personality. These aren’t conditions prevalent with Shelties, but each dog is unique.

Shelties are very athletic dogs with lots of energy, so if you are able to provide them with the exercise they need you can reduce their chances of boredom, frustration, and anxiety. All of these conditions can progress to aggression in some dogs.

Though they are not known for being aggressive, Shelties do have an issue with barking and nipping more than most other breeds.

Both of these behaviors can be controlled with training. Just like most breeds, it is highly recommended to get Shelties trained and socialized as early as possible.

If you’re thinking of getting a Sheltie as a family pet, and you don’t mind the barking, then this breed is a perfect family companion.

Shelties are generally non-aggressive, loyal, and will love you and your family.

Interested in learning more about the Sheltie breed? My guides below are for you: