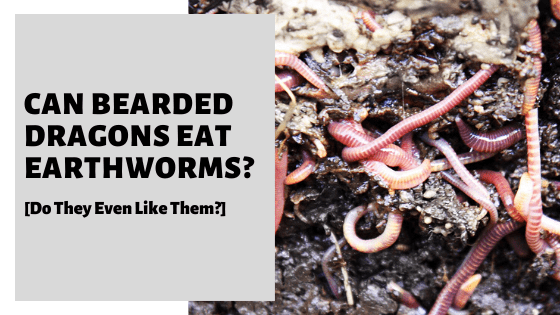 Owning a bearded dragon comes with a number of questions and dietary considerations. While they do best on a diet of both insects and plant-based foods, it can be a challenge to know what are the best options. What about earthworms? Are these safe to feed and are there any benefits in doing so? And what about wild earthworms that you may find outside? This is what the research states.

Bearded dragons live on a diet that primarily consists of insects and plants.

They require a wide variety of these to thrive, but also to keep boredom at bay.

It’s hugely important as an owner to attempt to mimic the diet of wild bearded dragons.

Of course, this is going to be a challenge considering that they are native to the semi-arid interiors of eastern Australia.

However, many owners are able to successfully replicate the diet; and do so with the inclusion of what they have available.

Generally, a natural diet is best, ensuring that a captive bearded dragon meets their nutritional needs and requirements.

Earthworms are widely and readily available, so it would be great if your bearded dragon could consume them.

Let us now take a closer look as to whether this is a good idea and how they typically respond to this worm when offered.

Bearded dragons may eat earthworms if provided, but many owners report that their beardies prefer not to do so.

Earthworms are actually quite unpalatable for a bearded dragon; especially compared to some of the other foods that they can be provided in their diet.

Earthworms are generally quite large, added to the fact that they release a mucus that lines their skin. This is what they used to move about underground.

Unfortunately, this texture does not always taste good to a bearded dragon.

Some beardies are less fussy, and of course, it does also depend on the exact species of earth worm and how much mucus that they have secreted.

In other contexts, a bearded dragon may eat an earthworm out of hunger; or the movement of the earthworm may invoke a natural instinct for them to do so.

For more experienced bearded dragons, they may know to leave an earthworm if provided, in the hope of more food later in the day.

Ultimately, whether or not your bearded dragon will eat earthworms can depend on multiple factors.

Its always best to offer a one and see how your beardie responds. This can, change over time.

It naturally follows for us to question whether wild bearded dragons actually consume earthworms altogether.

As previously mentioned, this reptile is native to the hot and sparse landscapes of Australia.

As such there are not many earthworms situated there.

The conditions, with dry, warm soils, are not conducive to their way of life.

So, wild bearded dragons are unlikely to even find earthworms.

Instead, they feast on other overground insects, such as ants, termites, flies, crickets, and spiders.

Bearded dragons of all ages require a certain amount of protein in the diet. This is essential for healthy growth and maintenance. Whereas baby and juveniles require more protein; it is important that you do not neglect protein as your beardie ages and transitions over to a diet that is higher in plants.

There are a number of benefits to offering earthworms to your beardie dragon, the main ones are as follows:

This being said, earthworms should be offered as a treat and occasionally.

This is because they are equally high in fat which can lead to weight issues if not monitored and controlled.

Earthworms in themselves are not toxic to bearded dragons. However, there are certain things you need to be aware of if you do plan to offer some to your beardie.

First and foremost, earthworms can carry a lot of water.

Some of the larger worms are up to 90% of water in weight.

This can be a challenge for bearded dragons to digest and is not something that they are generally accustomed to.

So, you need to be especially careful of the earthworm’s size. This is especially true for baby/juvenile bearded dragons.

If you offer food that is too large in relation to your bearded dragon, it can result in what is called ‘impaction’.

In other word, food blockages or digestive unrest which results in constipation. This can be very dangerous in beardies, even leading to paralysis in worst-case scenarios.

While a few smaller earthworms are unlikely to cause an issue for an adult bearded dragon, it is something to consider.

If you own a young beardie, you will need to seek out smaller earthworms!

A good rule of thumb to follow is that insects/worms should never be bigger than the space in between your bearded dragons’ eyes.

Lastly, you need to consider where the earthworms are from and how they are raised.

All live prey, even including crickets and other types of worms, must be either raised or purchased from pet stores, bait stores, or reptile breeders.

We will look at why this is below.

While it may seem cost-effective to feed your beardie earthworms you have caught outdoors; it is highly risky and not recommended.

Wild worms are not a good idea for two main reasons: parasites and chemical contamination.

Wild earthworms are more likely to harbor parasites that can harm your bearded dragon. These can either be small organisms or smaller worms that live off their earthworm host.

Either way, it can lead to your bearded dragon becoming infected which can result in malnourishment and higher propensities to other illnesses.

Secondly, wild earthworms are likely to have crawled in/across grass or other plants that have been sprayed with fertilizers, insecticides, or other harmful pesticides.

All of which can cause a lot of damage and harm to your bearded dragon.

So instead, you must ensure you either raise your earthworms carefully yourself, or purchase them from a reputable pet store, bait store, or reptile breeder.

You need them to have been raised and harvested for the purpose of feeding reptiles.

What Kinds Of Worms Can Bearded Dragons Eat?

Now that we know about the benefits and downsides of earthworms and the fact that your beardie may not even enjoy them – it’s useful to know of other worms that you can look to feed.

It’s important because live insects are a necessary part of a well-rounded diet.

Thankfully, there’s a wide variety of health-promoting and more flavorsome worms that will keep your beardie well-fed and happy.

Finding a species of worm your beardie likes is essential as there may be some worms they choose to ignore.

You should, however, look to limit the consumption of any worm with a high content of fat – reserving them only as occasional treats.

So, with these factors in mind, let’s look at five worms that are ideal treats for your bearded dragon:

Mealworms are among the most popular feeder insects for many reptile species. Not only are these worms affordable but they keep well.

They are, however, not as ideal for younger beardies as they have a hard outer shell that can be difficult to digest.

A good rule of thumb regarding worms is not to offer worms longer than the space between your bearded dragon’s eyes.

Superworms are a larger version of mealworms and contain the a similar nutritional profile.

Just like the mealworms, super worms are a bit tough on the outside so may not be as ideal for baby and younger beardies.

Waxworms are much higher in fat than other worms species. Therefore you must not feed them in large quantities to your beardie.

Bearded dragons love this worm, which is hardly surprising as the fat gives this worm its flavor.

If you feed too many of these to your beardie, you will see accelerated weight gain, and it will impact their energy level’s also.

Owners often desire these worms for their beardies; however, they are more expensive as they are in such high demand.

Butterworms are an ideal source of calcium and as a result, don’t need to be coated in nutritional supplements.

Hornworms are also known as goliath worms for their sheer size, and they can even be used as a staple food for your beardie.

They are one of the healthiest food options available for bearded dragons.

They grow quite quickly if they are tiny when you first buy them gut load for a couple of days until they reach their usual size.

The space between your beardies eyes should be used to indicate the size of the worm you should feed to your pet; they should not be fed to young beardies until they are fully grown.

Live worms are an essential part of a bearded dragon’s diet in addition to other insects and certain plant matter.

There are a wide variety of worms to keep your beardie happy, however, they are not all created equally.

As such, you should become familiar with their nutritional content along with your beardies preferences.

Earthworms are fine to feed your bearded dragon, but you must be careful about the serving sizes and how often you look to feed them. They are high in fat which can lead to weight problems if given in excess.

Earthworms should be limited to a very occasional treat, and you should consider other options of worm in addition for your beardie.

When you are looking for suitable worms for your bearded dragon you should opt for those that have a higher ratio of protein to fat.

Use common sense regarding food choices and be aware of the nutritional benefits of everything you look to offer. Be sure to reward your beardie with an occasional treat.

Always be careful of where you source your food. In the context of worms, never give worms that are caught from outdoors. They may contain parasites as well as exposure to pesticides, both of which can be very harmful.

You can raise your own worms to feed to your beardie, but many owners have encountered problems with this practice.

Shop-bought worms are generally the most convenient not to mention the safest option.

So if you want to offer some earthworms, this is the way you probably should go.

Bearded dragons can eat red earthworms so long as they have been specifically raised for feed. You should never offer your bearded dragons wild worms, or those caught outside as they could be carrying parasites and harmful chemicals.

Wondering what else you can feed your Bearded Dragon? Check out my feeding guides below: