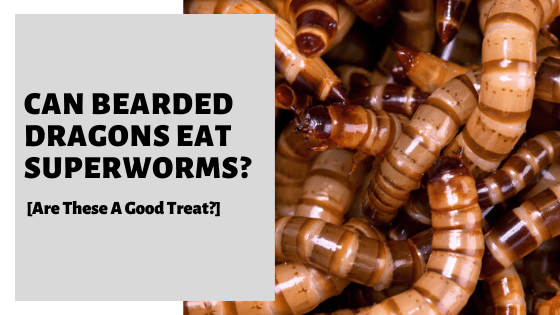 If you own a bearded dragon, chances are you want to offer them treats every now and again. But what about superworms? Are these safe or even advisable to feed and if so, how many can you look to provide? I decided to research these insects and their suitability as part of a bearded dragons diet. I would like to share with you what I managed to find here today.

So, can bearded dragons eat superworms? Bearded dragons can eat superworms and typically enjoy doing so. However, beardies should eat them in limited quantities and in moderation. This is because they are high in fat, and are more challenging to digest than other insects, such as crickets. Generally, once per week is good schedule to follow.

Superworms are a common pet feed, and you’ll often see them sold in pet stores. They are often advertised for all reptiles, amphibians, fishes, and birds. But of course, a bearded dragon has their own unique dietary needs, requirements and preferences.

Let us now take a closer look at whether you should look to include superworms in your beardies diet. We will cover both the advantages and disadvantages of doing so, as just like most foods, there is an optimal amount to feed.

Feeding Superworms To Your Bearded Dragon

Superworms are a large worm, averaging around 2” to 3” in length. They are the the larvae of the darkling beetle, and are commonly bred to be consumed by lizards, turtles, frogs and salamanders.

As such, bearded dragons are often recommended superworms. However, upon closer inspection of the nutritional content, we can soon see that they should be provided in moderation, and in limited serving sizes.

Superworms are high in fat and relatively low in calcium. They are made up of 46% protein, 43% fat, 8% ashes and 1.4% carbohydrate.

When we compare superworms to crickets and other types of worms like butterworms, hornworms and silkworms, we soon see that they are not the best choice:

As you can see, there are other worms and insects with more favorable amounts of moisture, protein and calcium that all come in at lower fat.

Fat needs to be carefully controlled and monitored in bearded dragons; for if it is to be oversupplied in the diet, your bearded dragon can gain excess weight and suffer with other negative health complications.

With all this being said, this is not to say that superworms cannot be fed at all. They can, and they do have their uses.

Superworms are typically enjoyed by many bearded dragons. Therefore, for a bearded dragon that is malnourished, not eating, or has gone off their food – they can be used to get them eating again.

Sometimes placing a superworm or two on some greens is enough to get a beardie eating the foods they need but may have become disinterested in for whatever reason.

Just be careful with how often you feed them and do not become over-reliant on this strategy.

As you can see, superworms are also quite practical from an owners perspective.

You can keep them in a container along with some dried grains at around 70 degrees Fahrenheit to keep them alive and ready to be fed at any given moment.

Just be sure to remove their heads as these insects are known to bite. This can be a painful to both you and your bearded dragon alike!

Thankfully, the rumor that superworms can bite through a bearded dragons stomach has been routinely debunked by reptile experts. There is no evidence to suggest otherwise. This is not something to worry about. But removing the head takes away this concern for good!

Lastly, you will want to ensure that you only ever source fresh, specially harvested superworms for your bearded dragon. This is a great example of the kind to buy from Amazon.

How Many Superworms Should A Bearded Dragon Eat?

A bearded dragon should consume no more than 15 superworms in any one sitting.

They should only do so once per week/ or once every two weeks.

Therefore, superworms should be considered as treats, not snacks, and should never become a staple within the diet.

Due to their difficult to digest exoskeletons, it is also recommended to only feed superworms to fully grown bearded dragons.

Younger, baby and even juvenile beardies can struggle with the husk; especially as their digestive systems have not yet fully developed or become as robust as in later life.

If you did want to feed superworms to a baby/juvenile bearded dragon, you would need to source out smaller superworms (smaller than the space in between their eyes). While it is not recommended, your bearded dragon is less likely to suffer with the digestive issues larger, fully-grown superworms (2-3″) can have.

Secondly, we must remember the low-ish calcium content. Additional calcium supplementation would be advised if they, and other low-calcium foods, were to become more regular in the diet.

Anything more than this and you risk running into issues. With superworms, less is definitely more.

You’ll also want to consider the timing of feeding. Only offer superworms following the main, staple meal. You do not want your beardie to become full, or develop a preference over their other foods.

Remember, your bearded dragon should be fed a diet that matches their age and size:

Bearded dragons can eat superworms, so long as they are an infrequent treat. Once per week is typically advised.

While superworms are often well enjoyed by bearded dragons, there are actually far superior insects out there – such as crickets, hornworms, butterworms and silkworms. All of which boast a stronger nutritional profile – in water content, protein, fat and calcium.

Lastly, as an owner you must consider the fact that bearded dragons can suffer from impaction.

Superworms, with a tough exoskeleton, can worsen the problem or even be a causal factor to begin with.

Therefore, it is essential that you are providing adequate access to fresh drinking water at all times. Keeping them hydrated is essential to prevent constipation which can be fatal if not resolved promptly. If in doubt; take them to a vet.

Ultimately, superworms can be a suitable treat for adult bearded dragons. In certain contexts they can even be preferable for increasing appetite and getting your bearded dragon to eat more good food and greens in their diet.

For babies and juveniles, you do have to be especially careful. For the most part, other insects are preferable. Otherwise, ensure they are sufficiently small.

Wondering what else you can feed your Bearded Dragon? Check out my feeding guides below: