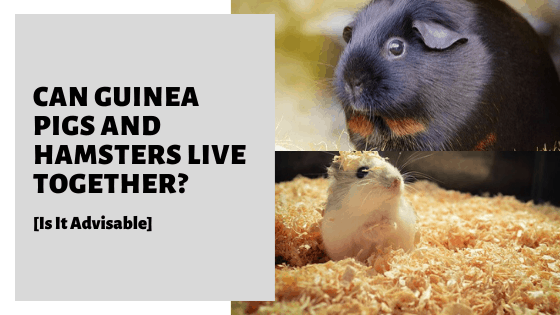 Owning multiple pets comes with a range of questions, considerations, and complexities. Guinea pigs and hamsters are no exception. You may be wondering if guinea pigs and hamsters can live together, how they will respond to one another, and if they can get along, side by side. Here is what you will need to know.

While it can be difficult to own guinea pigs and hamsters, it is not impossible.

There are just some things that you will need to do and consider ahead of time.

Before we look at these factors, let us take a closer look at the temperaments of each rodent and how they would typically respond to one another.

Guinea pigs are herd animals and thrive on living with one or more guinea pigs for companionship. The company of other guinea pigs benefits their physical and emotional well-being.

Hamsters, on the other hand, are solitary and very territorial.

Because hamsters are territorial of their space, they will view the company of another as an invader in their space and are likely to attack.

Guinea pigs are prey animals, so hamsters are not the ideal company for them.

They are distant relatives of each other, belonging to the order Rodentia, guinea pigs are a genus Cavia type and hamsters are rodents that fall under the subfamily Cricentinae.

Guinea pigs are larger than hamsters and not as active. They have different sleeping patterns to each other, guinea pigs rest at night, whereas, hamsters are active during the night.

As you can see they are actually very different in nature. There is no overlap and logically, you can start to see why housing them together is probably not a good idea.

Do Guinea Pigs And Hamsters Get Along?

In general terms, guinea pigs and hamsters don’t get along. They have very different temperaments from each other and how they respond to other animals.

However, there are rare occurrences where the two animals get on well together. If you want to introduce them to each other and help them get along, it’s best to start when they are both young.

They can grow together and get accustomed to one another gradually. This should only be done under close supervision and you should always be close and able to separate them.

Hamsters have a more aggressive nature and could attack your guinea pig, but equally the guinea pig is larger than the hamster and will defend itself – bringing them together could result in an injured guinea pig and a dead hamster.

Can You House Guinea Pigs And Hamsters Together?

If you house guinea pigs and hamsters together, you will likely run into a few problems. It is therefore wise to house them in separate cages.

In addition to being placed in separate cages, they should be kept in different parts of the house. The main reason being is that they have different sleeping patterns.

Guinea pigs are active during the day, they enjoy exercising, playing and socializing so by night they are exhausted. Hamsters are nocturnal and will happily run inside the wheel in their cage for the whole night.

Guinea pigs enjoy being active and playful; they need a large cage, where they can have enough room to run around in.

Hamsters are smaller animals and require a lot less space, so separate living quarters in different rooms are key to keeping them both happy.

Can Guinea Pigs And Hamsters Live In The Same Room?

Guinea pigs and hamsters should not be kept in the same room – even if kept in separate cages.

The sleep cycle of either pet will disturb the other, and their distinctive characteristics will cause disharmony.

So, if you plan to keep both animals, you must not have them living in the same room as each other.

Most hamster species need to be solitary – this is actually good for them, the opposite is true for guinea pigs, they need the companionship of other guinea pigs.

You mustn’t force them to co-exist in the same space this will prove to be counter-productive, do what’s best for both and not what’s most convenient as it won’t pay off in the end.

Can A Hamster And Guinea Pig Play Together?

Hamsters and guinea pigs will not typically play together; although in some rare circumstances they may be able to tolerate one another.

Hamsters enjoy solitary activities like running inside a wheel, or inside a ball, figuring their way out of a maze, and running in and out of tunnels.

They are very tactile creatures and will enjoy getting a sense of and playing with ordinary objects like:

Hamsters enjoy exploring their owners and getting cuddles – as do guinea pigs, perhaps this is an activity you could get them to do together, but you are limited when it comes to getting the two different animals to play with one another.

Guinea pigs are very playful they need the companionship of other guinea pigs, and they will play together, but a hamster is not a good substitute for a guinea pig.

They don’t have enough in common with each other to make playmates.

At best they will leave each other alone, with little interaction, at worse, they will injure or kill each other.

They both like to play ball, so under close monitoring, you could gently encourage them to play ball together.

You could try getting them to play with different ball sizes, materials and it could take some trial and error to get them to engage in play together.

You could also use treats to coax them into a game together.

But what about housing guinea pigs and rabbits? Well that’s a topic for the next guide.