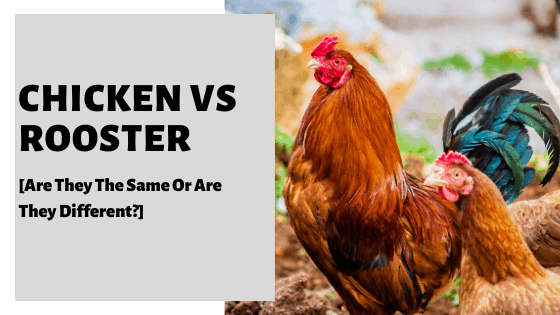 Terminology is one of the most common areas of confusion that new chicken keepers often face. There are many terms that are used incorrectly, while others are used interchangeably. But what about chickens and roosters specifically. Are these the same thing, or are they in fact different types of bird? Furthermore, are there any significant differences between the two? I spent some time researching and would like to share all that I managed to find here with you today.

So, what is the difference between a chicken vs a rooster? A rooster is a male chicken, whereas a female chicken is referred to as a hen. Before 1 year of age a rooster may be referred to as a cockerel whereas for a hen they are called a pullet during their first year of life.

When people talk about chickens, they often are referring to hens, which are female chickens.

Female chickens (or hens), are ideal for running around in your backyard; they are easy to feed and maintain, especially since they don’t require additional heating.

If you have a small flock, your hens will keep each other company, and they are generally much happier when kept together.

Your hens will reward your efforts with fresh, delicious eggs, and you don’t need to have a male present in order to receive them!

Equally, there are many advantages to having a rooster among your flock. For example, a rooster (being a male) can increase the size of your flock.

They protect the hens, encourage good behavior, and more importantly, they are magnificent to behold with their bright plumage, so they add color to your flock!

Let us now take a closer look at roosters; their similarities and differences with chickens (and/or hens) so you can better understand chicken keeping on a more fundamental level.

Its good to learn and useful to know – so be sure to keep on reading!

Is A Rooster Still A Chicken?

A rooster is indeed still a chicken. They are a male chicken, but are still every bit a member of the same family of birds (Gallus gallus domesticus), as the hen.

When we hear the word chicken, what springs to mind is the image of a hen, or flock of hens.

Most people think of hens when the word chicken is mentioned because many backyard chicken keepers will not keep a rooster.

While the advantages of keeping a rooster around are undeniable, hens can still lay eggs for us to collect and eat without them present. This is because the eggs we eat are actually unfertilized.

This is what makes them a source of food as opposed to a young chick.

Many chicken keepers will say that its generally not a good idea to breed chickens in your backyard. This is because it will naturally lead to more roosters, and the flock size can soon get out of control.

Then again, this is a personal decision and one in which you can plan for accordingly.

If you do want to keep a rooster or two, its good to know that they can be kept with the flock. However this should only be the case when they are young.

As they mature, they tend to fight which can result in serious injuries.

If you intend to keep male birds for meat, make sure you know what’s involved and how to do so safely, hygienically and humanely.

Are All Male Chickens Roosters?

The rooster’s famous crowing at the break of dawn actually begins before they are four months old.

Hens can in fact crow as well, but the hackle development is one of the most apparent indicators and distinguishing differences of a rooster.

Roosters can crow at any of the day; some crow constantly, which can become somewhat annoying and even obnoxious. However, others can crow a few times a day.

This is something that is going to depend on the bird, and something you will have to consider if you do intend on keeping them.

And we have another term for you!

Another male chicken, known as a capon, is a castrated rooster.

The caponization of a rooster results in certain male characteristics becoming stunted.

For example, the wattle and comb stop growing after castration, so a capon’s heads take on a dwarfed appearance.

Instead, the tail, saddle, and hackle feathers grow unusually long.

The caponization procedure eliminates the bird’s male sex hormones, reducing their sex instincts, and it alters their behavior.

Again, whether you want to keep a castrated rooster, without the risk of breeding is another option to consider.

At What Age Can You Tell A Chicken Is A Rooster?

You can begin to tell a chicken is a rooster around the three month mark, by examining the saddle feathers in front of the tail. This is the most accurate way to tell the difference.

At three months old, cockerels (remember a male chicken that is under 1 years old) will have long and pointy saddle feathers, whereas a hen’s will be rounded.

There are a few other early indicators that show your chicken is a male, such as the comb size and redness. However, this is often not the most reliable sign.

This is because comb sizes vary according to chicken breed and individuals, irregardless of gender. They can therefore be confusing.

The crowing sound a chicken makes is also a good indicator of gender, but again not the most reliable.

Besides, the crowing of a rooster doesn’t sound very male until they are four or five months old.

The shape of saddle and hackle feathers is a better indicator of gender than anything else.

Although its easier with with some breeds than others.

For example with Sebrights and Silkies, it can be difficult to tell male and female chickens apart, even going by the feathers!

In Sebrights, the cockerels will have the same feather shape as the females. so, this means that the wattle and comb size will be the better way to identify the gender.

Silkies, on the other hand, have feathers that point downwards, so it’s hard to see the shape.

The comb is often hidden in Silkies, and wattles are not present in most bearded silkies.

The following are some tell-tale signs and ways a keeper can look to tell the difference in their birds:

How To Tell Hens And Roosters Apart?

You may be familiar with the following “if it lays eggs, it’s a hen; if it crows, it’s a rooster”. While this may be a strategy as your flock ages, its not the best approach for all keepers.

Besides, often , birds are too young to lay eggs or to crow.

So, you must become familiar with the other clues.

Let us now take a closer look at these one by one:

As you can see, there are plenty of practical ways to differentiate your birds, yourself.

It does of course depend on the exact species of chicken you are keeping.

If you are not sure of the particular species, or are struggling to sex your birds, you can always ask a vet whom will be able to do so on your behalf.

Sooner rather than latter with this approach is advised!

You do not want the risk of breeding and your flock getting out of control before you’ve had a chance to course correct.

Should I Separate My Rooster From My Hens?

Whether or not you should separate your rooster from your hens will depend on whether you want to increase the size of your flock or not.

Cockerels usually reach sexual maturity by the time they are four or five months of age. At this point, they start producing sperm and are therefore able to reproduce.

So, a rooster (being over the age of 1) could mate with your hens if they are kept together.

In fact, roosters remain fertile for many years; even though the quantity and quality of their sperm does decrease naturally with age.

You can never be too careful.

Thus, if you want to keep your flock at a steady level – you would do best to split the cockerels from the hens before they reach sexual maturity.

What you then do with them will depend on your setup, your property and the space you have available.

You could consider keeping them separately, but consider the cost, time and effort involved here.

Unfortunately, cockerels have a limited market value unless you have a superior bloodline in a highly sought after breed by other chicken breeders.

So while your options are limited, you can give the following some thought:

If you intend to keep more than one rooster, it’s best to provide separate housing for them. Hopefully, you should have enough space for them to roam about.

If you do intend on keeping your roosters and hens together, you will need to consider the dynamic.

Each rooster must have his own coop that he shares with his hens; a general rule to follow is one rooster for ten hens.

Keeping too many roosters together around hens is unlikely to go well; with fighting, aggression and injuries likely.

There are so many terms used in chicken, sometime interchangeably, that it can soon become confusing.

These are simply terms used to differentiate between male and female chickens.

Another common one is the difference between a chicken vs hen. In that example, the chicken is the name for the bird (could be male or female), whereas a hen is the term used to refer to the females only.

If you are researching roosters specifically, you are likely to find a lot of bad press about them. This is especially true if you are contemplating hatching your own chicks.

Many keepers who decide to get a rooster do not end up regretting their decision, although it does take an extra level of planning and consideration.

Its also up to each keeper and what they ultimately want from their flock.

There will always be pros and cons attached to having male chickens.

The pros are that they protect the flock, keep badly behaved birds in line, fertilize the eggs (to give you new birds), and look fantastic with their bright red plummage.

The cons are that they can be aggressive, territorial, and noisy. Plus, they can stop you getting those tasty eggs which may be the reason behind keeping chickens in the first place!

If you decide you want to breed more chickens, you should stick to the rule of one rooster for ten hens. One is enough.

Lastly, if you have any questions or concerns about your flock, or want support sexing them, be sure to contact your vet. They’ll be more than happy to assist.