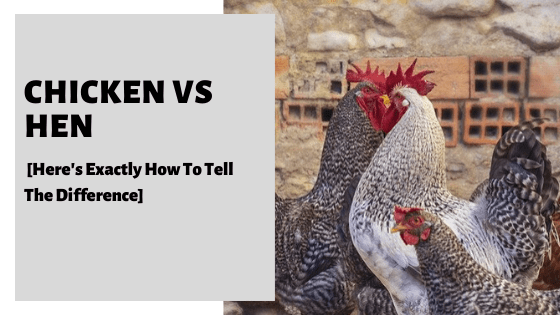 So, what are the major differences between a chicken vs hen? Chicken is the broad term for the species as a whole, whereas a hen is an adult female chicken of 6 months and older. The term chicken is therefore all-encompassing and can include roosters, cockerels, hens, and pullets.

If there is any confusion between chickens and hens, let’s clear it up in the following sections.

What Is A Chicken?

Chickens are prevalent throughout the world as domestic animals.

Humans keep chickens mainly as a food source; some chickens are kept solely for egg-laying, while others are meat birds.

But some people like to keep them as pets because they are intelligent, playful, and friendly birds.

Chickens are omnivores, which means that they can enjoy a variety of different food sources that include meat, as well as vegetables, insects, and bugs (like worms, ants etc).

All on top of a pelleted feed, where an organic chicken feed is best.

The average lifespan of a chicken, depending on the breed, is five to ten years.

Genetic studies have shown that these birds have maternal origins in East Asia. South Asia, and Southeast Asia.

Common ancestry is found in Europe, America, the Middle East, and Africa.

The domestic chicken that we know today made its way from ancient India to western Asia and finally to Greece by the 5th century BC.

Males less than one-year-old are cockerels. Capons are castrated roosters/cocks.

Roosters/Cocks have different physical attributes to their female counterparts by their striking plumage.

Both male and female chickens have wattles and combs; however, these tend to be more prominent in males.

Female chickens over one year old are hens, and females less than one-year-old are pullets.

In the egg-laying trade, pullets are considered hens once they begin to lay eggs at around 16 – 20 weeks of age.

What Is A Hen?

Not all chickens are hens; however, all hens are chickens. A hen is a mature female chicken over a year old; unlike the rooster, they lay eggs.

How soon hens are ready to lay eggs depend very much on the breed of chicken and the time of year.

Some of the new breeds, like the Golden comets, are specifically to lay lots of eggs and may begin laying as early as 16 weeks.

Other breeds that lay soon are Barred Rocks, Delawares, and Rhode Island Reds – they lay at 18-20 weeks.

As previously mentioned, the time of year is another determining factor in how soon a hen can lay eggs (later for winter chicks and sooner for spring chicks).

Most hens lay eggs at around six months of age.

Some chickens continue to lay eggs every day or almost every day, some every two days.

Younger hens lay eggs at larger intervals until they develop to maturity.

Backyard hens typically stop laying eggs after four years, again this depends on the individual bird and their particular breed.

You will notice that as they age, the frequency in their egg-laying will begin to decrease.

Hens can lay eggs without a rooster present; however, if a rooster is allowed to mix with hens, there is a good chance that eggs will fertilize.

This will result in chicks being born if the eggs are left to nest under the hen.

We know that hens are female, as are pullets ( they are young hens). Cockerels are young male chickens and roosters are male but can be any gallinaceous bird.

The chicken is called by many names, and it’s understandable for people to get confused as to what a hen is and what a chicken is.

The best way to understand the difference between a hen and a chicken is that a chicken is a broad term for the bird, whether it’s male or female, or young chicken; whereas, a hen is an adult female chicken.

If a person is talking about a chicken, they could be referring to a hen, a rooster, a pullet, or a capon.

A hen is a female chicken over a year old; some would consider a chicken a hen as soon as she lays eggs, which sometimes is as early as 16 weeks, depending on the breed.

If you are planning to look after chickens, or even start a poultry business, then you must learn the differences between males and females from the time they hatch.

It’s not easy, especially at the beginning, but it gets easier with practice.

You want to ensure that there are no errors when orders are placed.

How Can You Tell The Difference Between A Chicken And A Hen?

Since a chicken is a broad term that includes roosters, hens, and young ones, it’s crucial to know the differences between the males and females at every stage so that no mistakes are made when you are trying to sex your birds.

It’s much easier to tell the adult male and female chickens apart:

How To Tell If Your Chicken Is Male

How to Tell If Your Chicken Is Female

How To Sex Day Old Chicks

There are generally two methods used to sex chicks in the days following their birth. These are called the:

Trying to determine the sex of day-old baby chicks is slightly trickier, but you can use the vent sexing method.

Begin by holding the chick’s head between the baby finger and the third finger; use your other hand to pull the skin around the vent as you hold the chick upside down.

If you see a tiny cloaca, then the chick is a male ( a cloaca is a male bird appendage similar to the penis and is used to urinate, expel waste, and mate).

With wing sexing, you are looking at the feather formation of the wings.

Begin by spreading the wings out, if the feathers have a pattern of a long feather followed by a short feather, then a long feather, it’s a female chick.

If the feathers have a uniform length, then it is a male chick. This method is safer than vent sexing as the latter is more likely to harm the baby chick.

Hopefully, you understand the differences between chickens and hens, and you know what physical traits are unique to males and females.

With time and practice, you will be able to tell the difference much more readily, and it will seem like less of a daunting task.