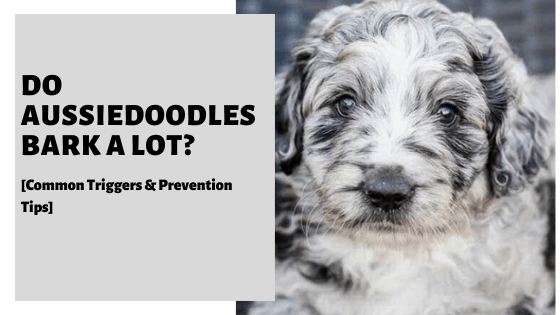 Aussiedoodles are very cute, especially as puppies. They are also known for being playful and loving. But what are they like when it comes to barking and are they known for this behavior? I spent some time researching the breed and would like to share what I found with you here today.

So, do Aussiedoodles bark a lot? Aussiedoodles are not known to bark very often; they are considered to be low barkers. However, like in any dog breed, they are more likely bark when hungry, excited, bored, when playing, when lonely or in need of an owners attention. Generally, socialization, training from a young age and company reduces the tendency of barking further.

While we can get a rough idea of what an Aussiedoodle is expected to be like; we must remember that as a hybrid dog; their temperament can differ quite a bit.

It depends a lot of the lineage and genetics inherited from each parent.

Being the result of their Poodle and Australian Shepherd parents; thankfully, barking does not tend to be too much of an issue in either of these breeds either.

That being said barking does serve a purpose and will be used from an Aussidoodle from time to time.

Let us now take a closer look at barking in this breed along with some other important aspects of their temperament.

Aussiedoodles are not known for their barking. In fact, many owners often report that it is rare behavior in their dogs and there is a low tendency for them to do so.

Being a hybrid dog, where two different parental breeds are bred together, there are three common types of Aussiedoodle:

Smaller dogs have a reputation for being more inclined to bark, so it naturally follows to question whether mini and toy Aussiedoodles bark more.

Thankfully, despite the differences within sizes, each type of Aussiedoodle has the same tendency to bark – and its not much!

However, we must consider that barking is a dogs primary method of communication. This is true of any breed.

So while an Aussiedoodle is unlikely to bark for no reason; they will do so if they feel the need to.

If an Aussiedoodle is barking, then chances are there is a legitimate cause and barking is deemed the appropriate response.

Thankfully, due to their poodles lineage, they are known to be very intelligent. So training out any barking behavior can be done with relative ease; especially if undertaken early and while they are still a puppy.

Beyond just training, socialization is an effective approach to build confidence in a dog and to reduce their tendency to bark during particular contexts such as unfamiliar places and new people.

Socialization is the process of teaching a dog all about new environments and situations, reducing their anxiety level during these contexts.

When Are Aussiedoodles Likely To Bark

As mentioned previously, there is often a reason for an Aussiedoodle to bark. There is most likely to be a trigger that causes this response.

The most common reasons why an Aussiedoodle may bark include:

These are all very respectable reasons for barking. They are ultimately in response to something happening.

When we review this list above, we can soon see that we can be proactive about barking. Especially as they are so smart and being highly trainable.

With proper and appropriate care, and recognition of the triggers, we can look to prevent them from occurring altogether or minimize their impact.

How Do I Get My Aussiedoodle To Stop Barking?

First and foremost, it begins with recognizing the trigger and the cause. It is only from there can you implement the right strategy.

So, let us know look at each one and an appropriate response:

As you can see, the solutions are fairly easy to implement. They do however, require you to effectively identify the trigger to begin with.

Try to observe your dog and their general behavior. Look for signs which can help suggest the cause if it is not entirely obvious.

Training An Aussiedoodle Not To Bark

While Aussiedoodles do not have a high tendency to bark; it is still important that you train them not to do so to prevent this behavior from developing.

This will also prevent those triggers referenced above setting off your dog.

You should begin training as a puppy; as soon as possible. Even the first day you bring them home is not too early!

Even at just 8 weeks of a age, an Aussiedoodle is capable of learning everything in which you teach them. Its important that do not wait – even until they are 6 months old, as this will just make your job harder.

Be sure to use positive reinforcement techniques; praising them for good behavior along with play and treats. This will help them to learn quickly and happily.

Training the quiet command is particularly effective. After doing so, you can use this whenever your Aussiedoodle is set off by one of the common triggers.

To do this, you need to first begin by training them the speak command. As counter-productive at that sounds.

So, whenever your Aussiedoodle barks, you then need to say the word speak before presenting them with a treat. Soon, your dog will recognize the command and know to bark.

From there, you can teach the quiet command. Tell your Aussiedoodle to speak and they will begin barking. Then issue the quiet command and only praise and offer them a treat when they stop barking.

This will take some time and consistency. But it is helpful and a good technique to have on hand to help reduce your dogs barking as and when needed.

Other things you can do is to simply ignore any barking. While this can be a challenge, it dos teach your dog that barking does not get your dog what they want. If you use this approach you need to commit and not give into their barking at all.

You’ll also want to actively reward your dog whenever they are quiet – especially after they have stopped barking. Be lavish in your praise and rewards when they have settled.

As Aussiedoodles love the attention of their owners, the ignore and praise when quiet technique works very well.

They soon recognize that being quiet gets them more attention than they would get barking. So, its in their favor to bark less.

Never punish bad behavior or barking. This can cause fear and anxiety in your dog and have far-reaching consequences.

Aussiedoodles are not known for their barking. This makes them an excellent choice if you are looking for a quieter breed.

However, with this being said, there are certain triggers and causes that can set any dog off; and this breed is not immune.

Equally, the temperament of an Aussiedoodle can vary; it depends mostly on the specific genetics they inherit from either parent. But it is also partly caused by environmental factors which you do have some influence.

In general, though, Aussiedoodles are regarded as being intelligent, playful, loving and friendly dogs devoted to their owners. Barking is not usually an issue; but it can be without effective training and early socialization.