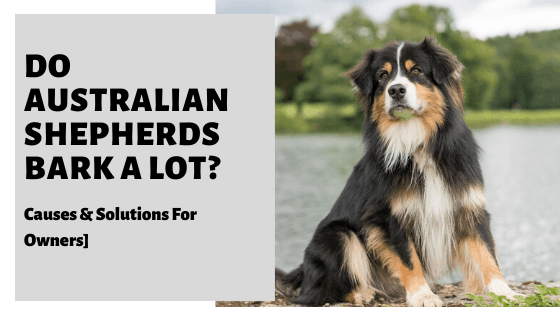 Australian Shepherds are known for their energetic personalities. As such, you will likely have some questions about their behavior, including whether or not they bark a lot. I decided to do some research and speak to several owners of the breed to find out more. I’d like to share with you my findings here today.

Aussies are dogs that tend to be extremely keen to please their owners.

They are loyal and agile and can be challenging, yet rewarding to welcome into your family.

If you are worried that your Australian Shepherd is barking excessively, there are many different approaches an owner can take to actively promote quieter, calmer behavior from their Aussie.

It is important to remember that Australian Shepherd dogs have been specifically bred to be working dogs.

They need strong and firm leadership from their owner to bring out their best characteristics.

Without consistent leadership, you may find that your Aussie becomes quite bossy, as they will attempt to take on the leadership role, and this can cause your pup to bark more frequently.

Love and consistency are key when caring for these intelligent and agile dogs.

Aussies are generally best suited to experienced dog owners who don’t mind nudging, nipping, and barking from time to time.

Do Aussies Bark A Lot?

Active, alert, and vocal is how some might describe this working breed, Australian Shepherds are known for being intelligent, highly energetic, and noisy from time to time.

Their heritage lies in working, typically in herding and agility, hence why Aussies are known for barking.

Australian Shepherds require lots of exercise and attention, to keep their bodies active and mentally stimulated.

An Aussie who is bored has lots of pent-up energy and feels discontent is far more likely to bark frequently and even incessantly.

Exercise for around 30-60 minutes per day is the minimum amount required to take due and diligent care of your Australian Shepherd.

When cared for properly, Aussies are known for being loving and loyal towards their owners. Exercise and activity are highly important parts of the care for an Australian Shepherd.

Owners may also find their Australian Shepherd likes to play and barks when doing so.

An Aussie barking when playing may be expressing their enjoyment or communicating with their owner.

It is very common and some would consider this an endearing character trait of the breed.

Australian Shepherds, as mentioned before, are highly intelligent dogs who will bark to communicate with their owners.

As a breed, they require a lot of attention, possibly barking if they do not feel they are getting enough of it!

It is important for Australian Shepherd owners to understand why their dog is barking to ensure that their dog is happy and so that they can take the best care possible of them.

Reasons Why An Australian Shepherd May Bark

If your dog wants to tell you something, the chances are they will bark.

Whilst many of us would love nothing more than to strike up a conversation with our pups, sadly it is just not possible (…yet, who knows what the future may hold!?).

Dogs, Australian Shepherds included, will bark to communicate something with their owners.

There are several different reasons why an Aussie might bark, and whilst barking is part and parcel of owning a dog, it can sometimes be a little annoying, late at night or early in the morning for example.

Barking is a useful attribute in a working dog, hence why Aussies are generally considered to bark more than other breeds.

Reasons why an Australian Shepherd may bark include:

Barking is your Australian Shepherd’s main way of communicating with you.

Training from a young age can equip your Aussie with other ways of doing so that can ultimately avoid excess barking.

Why Does My Australian Shepherd Bark So Much?

If your dog is partaking in excessive barking, sometimes there might be something more serious going on.

For example, if your Australian Shepherd starts barking out of the blue and this is a change in their behavior, this can be a sign that there is something troubling or hurting them.

Any Aussie is likely to bark, however, if your pup’s barking is excessive you may need to investigate the root cause of this behavior.

Barking is your dog’s way of communicating with you: if you ignore them, they won’t stop and the barking is likely to get worse.

Your Australian Shepherd might bark if they are hurt.

Watch your dog closely: there are often other indicators of injury such as limping that will accompany the barking.

If you suspect an injury, seek advice from your vet. They will be able to suggest the best course of action to relieve your Aussie’s pain and prevent further damage.

Your Australian Shepherd might bark if they feel unwell.

Barking is communication: listen to your dog because they could be telling you that they feel unwell.

If they are barking and you notice a change in their poop or eating habits, seek advice from your vet. It could be that your Aussie is unwell and needs medical treatment.

Your Australian Shepherd might bark if they are scared of something.

This could be noise, constant sound, or something they can see that is causing them distress.

Be mindful of any changes in their environment that may have led to increased barking.

It has been known for Aussies to be scared of the washing machine, getting your pup used to their surroundings or removing the source of their anxiety is a good way of preventing their barking through fear.

How To Stop Your Australian Shepherd From Barking

Establishing firm leadership and boundaries with your pup can allow you to encourage their more positive behaviors and encourage them to bark less.

To successfully train your Aussie to bark less or stop barking at inappropriate times, it is important not to resort to punishments.

Punishments can work as a deterrent however, more often than not, they will ultimately lead to more aggressive behaviors, fear, and distrust.

Try rewarding your Aussie with a treat when they calm themselves quickly or make a fuss of them when they stop barking.

Australian Shepherds are intelligent dogs who will soon associate more the connection with the treats and positive outcomes and a change in their barking habits.

Successful training usually happens when an owner is consistent and the training starts from a young age.

Australian Shepherds are working dogs, they are full of energy and require firm leadership.

The loving bond of trust and loyalty built between an Aussie and their owner lasts a lifetime, they are wonderful dogs to own and invest time in.

Here are a few different techniques that owners can use to stop their Aussie from barking.

Shaking Coins In A Can

Drop a few coins in a washed-out empty soda can. Tape the top shut so the coins won’t fall out when you shake it. Whenever your Aussie barks, shake the can.

Shake the can only enough so that your dog can hear it: try to avoid doing this in an angry or aggressive way.

This is an annoying sound to your dog and will catch his attention, and should deter them from barking.

Soon, you may find your Aussie builds and association with the annoying noise when they bark and it will encourage them to stop.

Command “No Bark or “Enough”

Short, sharp commands often work best when training a dog. Teach your Aussie this command from a very young age, so that it becomes part of their routine. When they bark, calmly but firmly say, “No bark!”

Then ignore their barking. You may need to say it again until your dog stops barking. Remember not to shout, your Aussie may misinterpret this as you barking along with them!

Try rewarding your pup for successfully following this command with a treat.

Many people suggest that it’s best to give a positive affirmation when your Aussie barks. After all, he’s just doing his job as a watchdog.

This tells him that you’re taking over now and he can go lay down.

This works best when you have a firm leadership over your Aussie, they are more likely to respect you and follow your commands.

Remember, a treat and positive words to your Aussie are encouraging.

Aussies are energetic, intelligent, and friendly dogs, they are loyal and loving to their families and would suit owners who are experienced or ready to take the lead.

That being said, they do have a herding heritage, so in many ways, barking is an instinctual trait.

While it may vary between dogs in this breed, they are generally known to bark more than others.

Training and firm leadership can help to reduce barking as well as provide your Aussie with everything they need including a consistent exercise routine.