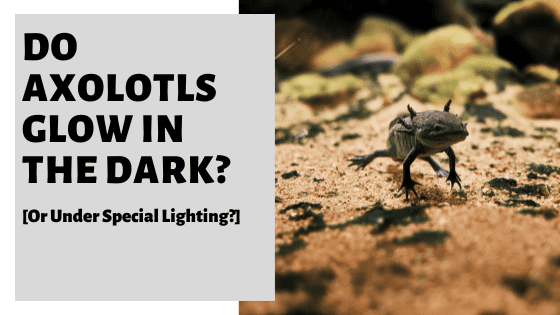 Axolotls are unique and striking in appearance. If you have researched this aquatic salamander, you have likely come across images of axolotls giving off quite the glow! Are these images an act of photo magic, or do axolotls really glow in dark environments? Here is everything you are going to want to know.

So, do axolotls glow in the dark? Some axolotls have been genetically modified to carry green fluorescent protein in their cells which makes them glow a bright green color when exposed to ultraviolet light. This coloration does not occur naturally and is the result of human modification of axolotls, but once the genetic change has been made, the green fluorescent protein does tend to be passed down to that axolotl’s offspring. Not all axolotls glow, and no known axolotls produce their own glow without exposure to UV light.

So, in other words, they can do.

But there is a lot more to it than that.

As we shall see if we continue to explore in the next few sections.

So keep reading. Besides, this may be important if you are looking to buy or own one of these amazing amphibians.

In general, no, most axolotls do not glow. However, there is one modified coloration of axolotl that will appear to glow under certain conditions. Axolotls are not bioluminescent, meaning that they do not create their own glowing light. Instead, axolotls that appear to glow in certain conditions have a genetic material called Green Fluorescent Protein (GFP) as part of their cells.

Axolotls hold a lot of value in the realm of scientific research because they have shown an ability to regenerate limbs and even nervous system tissue that is too damaged to use.

Scientists seek to study this process so that they might discover ways to help humans with tissue generation after suffering trauma or limb loss.

In studying axolotls, scientists found it useful to see axolotl cells in new ways, which led to the introduction of the Green Fluorescent Protein to axolotl DNA.

This protein is found naturally in some species of jellyfish and has been used to help scientists better see axolotl limbs and cells and has resulted in an axolotl color type that appears to glow.

There are many colors of axolotls, and only the type known as GFP axolotls appear to glow.

Other axolotl types are beautiful and range from dark-skinned, to spotted, to a light pinkish white known as Leucistic.

Green Fluorescent Protein axolotls are generally from albino axolotls that were modified by breeders or the scientific community and then bred directly for their new GFP trait.

There are no types of axolotls that create their own glow.

They will not glow simply because their tank or living space is dark.

Any axolotl that appears to glow is glowing because of the fluorescent protein in its DNA reacting with special waves of UV light.

What Light Do Axolotls Glow Under?

Axolotls that have the green fluorescent protein will glow under ultraviolet lights. The lights that people use for creating and shining ultraviolet light are known commonly as blacklights.

Blacklights are used by GFP axolotl owners because they give off ultraviolet light that reacts with the green fluorescent protein in their axolotl cells to create a green glow.

Blacklights also let off very little “useable” light (unlike a lightbulb used to light up a room for an activity) and allow the area the axolotl is in to stay dark enough for the glowing sensation to be seen.

Axolotls who have GFP traits may even appear to glow very slightly under normal lighting from the sun coming in through a window.

This tends to be a dimmer glow which appears mostly as a blue or green brightness around the eyes or other parts where the tissue is thinner.

To see the full glowing effects of a GFP axolotl, you will need a dim room and tank along with a blacklight UV bulb.

The bulb will give off barely visible ultraviolet light and lead to your axolotl putting on a living glow show.

Why Do Axolotls Glow Under Light?

Certain axolotls glow under light due to the presence of green fluorescent protein (GFP) in their cell genetics. This is not a naturally occurring protein for axolotls and must be introduced to their genetics in a laboratory setting. Once an axolotl has been modified genetically to have GFP in their cells, they are likely to pass this trait down to their offspring.

GFP is a protein that has been naturally found in one type of jellyfish and is bright yellow in color.

This protein is UV reactive and glows bright neon green when exposed to UV light such as a blacklight.

Most axolotls that glow are albino or leucistic under normal lighting, which means their skin lacks color or is extremely light in color.

This allows the glowing green fluorescent protein to really show through when exposed to the right lighting conditions.

Scientists originally used GFP to help axolotls grow so that they could study the ways axolotls build and regenerate body tissues after suffering an injury or stress.

As axolotls with GFP continued to be bred, they also entered the pet trade industry.

People seek them for their unique glowing capabilities, which is all due to the presence of green fluorescent protein in their bodies.

Is It Safe For Axolotls To Glow?

The introduction of green fluorescent protein to axolotl DNA has not shown to have any negative effects on axolotls and their health. Where glowing can become dangerous is in the UV exposure required to make the glowing reaction. Just like too much UV exposure can be bad for humans, it can be harmful to axolotls as well.

In nature, axolotls live in the bottom of lakes where they receive only small amounts of UV exposure which makes them poorly adapted for a lot of direct lighting, including black lights.

Like many amphibians, their skin is sensitive, and UV light can cause irritation.

Axolotls also lack eyelids which means that prolonged, direct exposure to UV light can cause irritation and burning of their eyes.

If you have a GFP axolotl that you want to see glow through exposure to UV lights (blacklights), it is best to enjoy the glow in short doses.

Some owners report having their UV lights on for 15 – 45 minutes per day, while others choose to keep times even shorter.

One common piece of advice is to shine UV light through only a part of the tank.

This allows your axolotl the choice of entering the UV light or seeking to stay away from the light as it sees fit.

Read more: Do Axolotls Like Light? [How Much Do They Actually Need?]

All in all, glowing is a unique feature of a certain color-type of axolotl.

It is the result of humans introducing green fluorescent protein to an axolotl’s DNA.

This protein reacts under UV light and gives us an axolotl that lights up the darkness with a bright green glow.

This process is safe for axolotls in short doses that limit the overall UV exposure experienced by the axolotl.