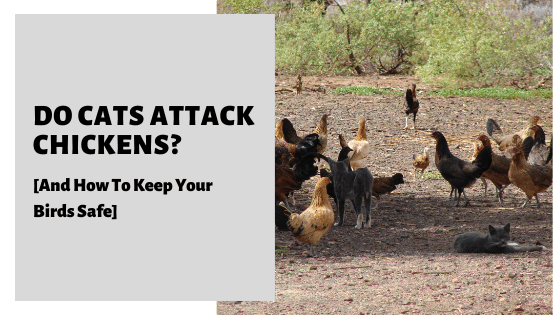 If you are a chicken keeper, then one of your core responsibilities is keeping your birds safe. Predators are one such example in which you need to be aware of and be vigilant. But what about cats? Do they pose a risk to your chickens and do you need to proactively take measures to prevent them from entering your chickens coop?

So, do cats attack chickens? Cats will rarely attack adult chickens, despite being predatorial animals. This is due to the relative size of chickens compared to cats, and the fact that chickens are good at defending themselves through pecking and getting away quickly.

In some cases, cats can even be quite scared of chickens, and there are several keepers who have seen cats flee the seen when their flock becomes quite animated!

That being said, cats are certainly a threat to chicks, young and small chickens, so you may need to remain cautious and careful if these are part of your flock.

Let us now take a closer look at the subject. We’ll start by looking at the natural instincts of cats before turning to how cats and chickens generally respond to one another.

Finally we will cover how you can ensure your birds safety at all times so be sure to keep reading to the end!

Cats are predatorial animals. They enjoy hunting and the pursuit of attacking vulnerable animals. So much so that they can account for billions of bird and mammal deaths each year.

While this sounds shocking at first, it is in their nature. It is how they have survived and have been hunting for thousands of years. It comes as no such surprise that they have become very skilled at it.

Cats have developed a specific style and method of attach. As a chicken owner, its always good to know what to look out for and what a cat attack actually looks like.

When a cat sees their prey, they zoom in on their target, study their victim and attack with stealth. Its usually a drawn out process; so you can actually see it happening ahead of time.

On the outside, the cat will look perfectly still, but in their mind, they are making cold hard calculations towards their next move.

When they’re ready, their rear end will shake as they will steady themselves getting ready to attack. If all goes according to plan, their victim will soon die and possibly become a tasty meal for kitty.

Feral cats often get a lot of the blame for killings, but domesticated cats can be equally vicious. They have the genetics of a skilled hunter and are proficient at being sneaky and going ‘under the radar’.

They are also vert good climbers, leapers, pouncers, sprinters, scratchers and biters. Cats love to catch small birds, rabbits, and rodents. Some cats enjoy hunting more than others, but smaller birds is what they often prefer.

Cats are found all over the world, and feral cats live in many different types of environments like agricultural lands, urban areas, forests, grasslands, coastal areas, they exist almost anywhere you can imagine.

They are very territorial and pick up readily on the scent of their prey. They like to get acquainted with their surroundings, by perching or lying on tall structures – this helps them to be pounce ready. Felines will fight off other feline predators. They do not like competition.

With this in mind, how are your pet chickens likely to fare in an area with a dense cat population? Should you be concerned now equipped with this information?

Are Cats Okay With Chickens?

Despite their natural instincts and ways, cats very rarely attack older and larger hens. This is because most hens would be similar in size to your average household cat.

Cats generally do not want to attack an animal that would be a significant challenge or a even a threat. A lot of domesticated cats for example are not looking for food; they are practicing hunting for joy and pleasure.

Older chickens are good at defending themselves and will chase away and try to peck any animal that comes for them. Cats included. There are a lot of chicken owners who have reported seeing such events unfold.

While it’s not unheard of for cats to attack hens, its generally not practiced. It is far more of a struggle to take down a mature chicken than it is a small bird or mouse – which they can easily pursue instead.

Cats are fast learners, and will often take away from a failed attacking experience on a chicken and will not attempt it again. This is especially true if they endured a peck or two.

However, while cats are generally okay around adult chickens, they can be dangerous for chicks and small bantams. If a cat gets in the brooder, it will attempt and can kill or hurt several chicks. They are vulnerable and defenseless; just the type that a cat is seeking out.

If such an attack occurred and was successful from the perspective of the cat, they are likely to bring their victim(s) to the owner to show off their handiwork.

This is why it is so important to consider your current flock and whether or not you currently have any young chicks or small/vulnerable birds.

For some of you reading, cats in and around your chickens may be perfectly okay whereas for others it could prove fatal.

Just consider that there are not real benefits to socializing the two; and it is always to be safe than sorry!

Err on the side of caution and your chickens and cats can live in harmony in the same home and alongside one another.

While cats and chickens are not natural playmates, there are benefits to keeping both as pets. If you keep chickens, you know that they draw rodents to your property.

Having a cat can be a good thing as they are adept at keeping rodents away. So long as you can keep a natural boundary between them, cats can do a good job of sweeping up any rats, mice or intruders seeking your chickens food and even their eggs!

Are Cats Afraid Of Chickens?

Cats are sometimes afraid of chickens, and on such occasion will leave them alone. Most adult hens would be similar in size to a cat, and they are known to flock together and defend one another when they are in danger.

If you or a close neighbor has a cat, you may have seen them run away from chickens.

Sometimes cats will stalk the hens out of curiosity, but they usually end up running away when a hen comes towards them.

Chickens are not predatorial, so as rule cats should not be afraid of them, and chickens are certainly not out to attack cats.

Hens are hardy, and when they are in danger or feeling cold, they tend to flock together; they know how to look after themselves and each other.

You still need to keep an eye on your chickens and do all you can to protect them, some cats be a nuisance to them and are certainly not good to have around your young stock.

How Do I Protect My Chickens From My Cat?

If you own cats, you can train them to respect chickens and not see them as a target. Failing this , you must keep your chickens in a secure predator-proof brooder.

Chickens depend on their humans for health, housing, and security; in return, they supply you with fresh eggs, entertainment, meat, and even pest control.

To begin keeping your birds safe, train them to come into the chicken coop at night. Start when they are young so that when they are ready to free-range, they will return to their enclosed house to roost and lay their eggs.

You must make sure that their home is environment proof, and you must close it up at night. The last thing you want is cats going for chicks and small hens at night.

Patch up any holes that are on the floors to prevent predators like cats sneaking in. Enclose your coop in a secure poultry run to avoid your cat and other animals from gaining access to your flock. Welded wired mesh, electric netting, or other fencing materials with small holes will help keep your hens in and cats out.

Felines are excellent jumpers and can quickly clear a 4-foot high fence, so think the higher the fencing, the better. Put welded mesh wire along the fence line to prevent digging underneath the fence.

You can install motion-sensitive night lights which, will flood the whole area with light when a cat approaches. This light will discourage any cat from carrying on and will often scare them away.

You can also purchase electronic chicken guards on Amazon; they take the hassle out of getting up in the dawn to let your birds out. It controls the secure opening and closing of the chicken coop. You can set it to a timer; it is simple to use, so you don’t need to be a technology expert. And it has a light that will scare away an animal from entering.

A final option which works particularly well if you have your own pet cat, is getting a rechargeable boundary shock collar. This will give your cat a small yet sufficient shock if it enters the boundaries you establish. All you need to do is place this boundary around your coop and it will keep your cat away!

For the most part, during the day, your elder chickens should be relatively safe even if a cat was to come near. Its the chicks that you need to always be wary of.

While its always important to be careful; your birds deserve and do best to have time out of their enclosure during the day, to free-range, and to forage. But they also deserve to be safe so you need to proactively think about local predators and other risks.

If you want to completely overcome all predator risk, consider investing in a premium, durable and Chicken Coop House. This is an excellent coop rated highly among chicken owners on Amazon.

Chickens are tough despite being birds of prey.

Back to our original question; do cats attack chickens? We now know that cats will seldom attack adult hens, mainly because most mature hens are equal in size to most domesticated cats.

However, the chicks and younger hens need to be kept safe from cats.

Cats like, many pets can be trained not to attack chicks, but you must do your due diligence to train them.

Cats are wonderful pets too and it isn’t their fault if they attack young hens, they are doing what comes natural to them.