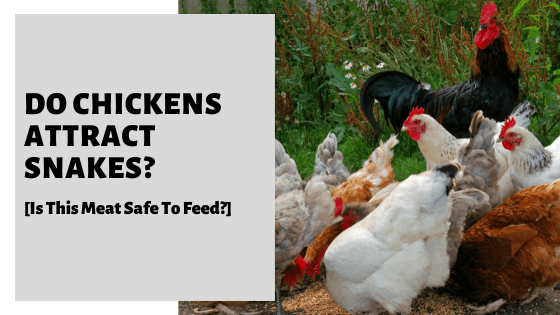 Owning a flock of chickens comes with a range of considerations. Keeping them safe and healthy is one thing, but you also need to consider your property and the effect that these birds can have. But what about snakes? Does having chickens increase or even cause the likelihood of snakes; does this put you or your flock at risk? This is what you should know.

So, do chickens attract snakes? Chickens can attract snakes, but not directly. Snakes are mostly interested in eating rodents, which can be drawn to the coop from leftover food and potential warmth. While a snake would not likely attack an adult chicken, it may take eggs and baby chicks if the opportunity did present itself.

Unfortunately, the word ‘snake’ conjures up scary images of blood-thirsty venomous creatures, ready to devour anything that crosses its’ path.

The reality is that snakes usually just want to eat rodents. This is great news if you have a bit of a rodent infestation!

If you happen to keep chickens in your backyard, it’s understandable to feel uneasy at the thought of snakes nearby and the threat they could pose to your flock.

Snakes are generally an unexpected and unwanted guest. Specific poisonous snakes can even be deadly.

Whether it is a dangerous snake, or a species much more ‘harmless’, it’s imperative that you do all you can to keep snakes away from your chickens.

This will protect the eggs, chicks, the most vulnerable of chickens, and of course you!

Let us now take a closer look at the relationship between chickens and snakes; whether chickens are scared of them and if a chicken may even attempt to eat one.

We’ll also be covering how to keep snakes away from your coop so be sure to keep on reading!

Are Chickens Scared Of Snakes?

Chickens are usually fearful of any unfamiliar intrusion. As snakes look and sound menacing; it’s safe to say chickens can be scared of snakes.

However, chickens are tough birds and very good at defending themselves.

A chicken may strike at a snake if she feels threatened, although it may take a few strikes to kill them if they were too.

If the snake manages to evade one bird’s quick strike, it is unlikely to stand any chance against a flock of chickens, as chickens are birds that flock together for safety.

Chickens run very fast with their beaks; the speed these birds use should be enough to kill a snake.

One would think this posture should frighten snakes forever. The problem is that just because chickens can kill snakes, it doesn’t mean that they do.

The most common scenario is that these birds might peck for a little while before giving up.

If you have an alpha among your flock, they are less likely to be scared of these slithering reptiles.

If you have a snake or any other predator in the coop, your flock may resist going into the coop, so do pay attention to your flock’s behavior.

With all this being said, having snakes around your flock is not ideal. You do not want your birds to be any unnecessary stress.

Therefore it is important to keep snakes at bay and to give your birds the most comfortable living environment as possible.

As far-fetched as it seems, chickens can eat snakes. A small-sized snake doesn’t stand a chance against a voracious feathered flock.

It is not unheard of for these birds to swallow a small snake whole, just like spaghetti!

A small snake to a chicken may even be seen as a more challenging worm.

Even though some plucky birds can defend themselves from snakes and even eat snakes, these reptiles are still a menace to your flock.

Snakes go after the eggs and the chicks.

If the eggs are left unattended, they become free food; and maybe one of the most nutritious opens available to a snake scavenging for food as a means of survival.

Aside from the threat to the eggs, snakes in the coop are a threat to you, as a snake will strike at you as you collect the eggs.

Signs You Could Have Snakes In The Coop

There are usually a number of tell-tale signs that you have a snake in your chicken coop. Here are the main ones:

How Do I Keep Snakes Away From My Chicken Coop?

Prevention is better than cure, so the best thing you can do is to keep snakes away from your coop in the first place.

The best way to keep snakes away from your chicken coop is to limit the ways they can enter – you must make sure that there are no holes larger than .5 inches in the coop.

You must also remove all the things that attract snakes to your property.

Here is a list of other things you can do to keep snakes away.

Chickens can attract rats in a similar way to how snakes can come onto the scene. In the hunt for food!

Mice and rats will eat poultry feed, so the more you feed your flock, the more you are supplying food to these unwanted vermin and the creatures that eat the rodents.

It’s a vicious cycle that requires the regular disposal of all food waste, especially the feed that has fallen to the ground of the coop.

If your snake situation gets out of hand, you can hire a professional to take care of it. Snakes are naturally territorial creatures, and the fully grown snakes will only breed, continuing to increase the snake population.

A professional snake remover won’t kill the snakes but instead will capture and relocate them to a more suitable area.

You will find that most chickens are scared of snakes and for a good reason, as snakes can be deadly.

It’s useful to know the characteristics of snakes as even though they can be dangerous, the vast majority of them are only out to hunt and eat rats and mice.

If you live in a hot climate and you have to deal with rodents from time to time, chances are you will encounter snakes every so often.

Cleanliness is crucial to keeping your chickens safe, as non-removal of uneaten feed attracts rodents, which naturally attracts snakes and other wildlife that like to consume rodents.

Many chickens are tough birds and excellent at looking after themselves as well as their fellow flock mates; never-the-less, snakes can be overwhelming to deal with, and you will need to take serious measures to keep the most fragile of your flock safe.

Will A Chicken Kill A Snake?

Chickens are capable of killing a snake, however, they will not attempt to do so unless they feel threatened. If a chicken was to kill a snake, it would be after some time and unlikely to occur after one strike.

Chickens do not attract rats by themselves. However, poor hygiene can lead rats to your coop. Leftover food and scraps are sought out by all rodents, including rats, who have a keen sense of smell. They scavenge for any loose food. Therefore, as a chicken keeper, you need to ensure you remove any uneaten food promptly, install proper chicken feeders, and do not leave any eggs lying around and available for too long once they have been laid.