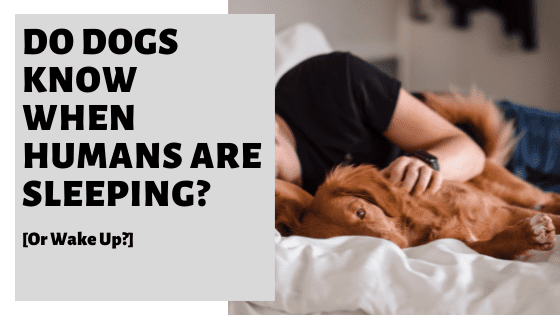 Dogs have been man’s best friend for about 11,000 years. They’ve evolved to become intuitive to their owner’s emotions and habits. But, what about when it comes to sleep? Are they aware of when humans go to sleep and do they respond accordingly? Well, here is everything you are going to want to know.

Well, should we actually be that surprised?

It’s well known that dogs are incredibly smart animals. One study has found they have a similar intelligence to a 2.5-year-old child.

Along with this intelligence comes their heightened senses.

This helps them understand everything about not just you and your habits but the entire world around them.

So, read on to see how these clever animals learn about your sleeping habits.

Can Dogs Tell When Humans Are Sleeping?

Dogs can tell their owners are sleeping because of their heightened senses. Dogs usually change their behavior around sleeping humans. Dogs tend to become quieter around their sleeping owners or sleep with them.

Dogs are smart animals and loyal pets to have.

Their intelligence allows them to quickly learn the habits around the household. And this includes their owner’s sleeping routine.

Along with their senses, dogs learn to associate their owner’s closed eyes with sleep, especially when combined when they lay in bed to sleep.

Each dog has their own personality, but most will become quieter around a sleeping human.

This may be due to their caring nature or attuned senses. Or maybe they’ve learned to be quiet after previously waking up their annoyed owner.

Once dogs know their owner is sleeping, they enter into their own pattern. This might be the time they patrol the house to protect their humans from intruders.

Or they might decide to rest up on top of a window-facing sofa to remain vigilant during the night.

Domesticated dogs haven’t had to rely on hunting and foraging to survive for thousands of years.

Now they associate feeding time with their owner.

When their owners are sleeping, they know they’re not getting any more food so they can focus on their patrol duty.

How Do Dogs Know When Humans Are Sleeping?

Dogs know when humans are sleeping because of their heightened senses. They can sense the changes in their owner’s body as they drift off to sleep. And they can smell the change of chemical releases that happen during the same time.

The main senses that dogs use to tell when humans are sleeping are sight, smell, touch, and sound.

Dogs’ eyes evolved to be incredible at night-time.

Wild dogs hunt at dusk and dawn when the light is fading. Their superior night vision allows them to hunt unsuspecting prey.

Domesticated dogs are no different.

They contain more rods in their eye, allowing them to see better at night than humans.

They also have an extra layer of eye tissue (tapetum lucidum) which boosts that night vision. And is why light reflects against dogs’ eyes.

No matter how dark a room is, dogs will be able to see their humans from them closing their eyes to how the body changes as it completely relaxes into sleep.

Dogs have amazing noses and understand a lot of their world through their sense of smell.

As humans settle into sleep, they release melatonin. This hormone is responsible for making us sleepy.

This chemical detection is why dogs make fabulous service animals. And drug-sniffing companions too.

Dogs nearby will be able to pick up on the release of melatonin and learn to connect it with a sleeping human.

A dog’s sense of touch will come into play when they’re lying next to their owner.

If the dog usually rests or cuddles up to their human while they’re sleeping, they’ll be able to feel the changes happen.

It can be an imperceptible change, but dogs sense when their owner relaxes into sleep.

The body’s tension, no matter how little, will ease, and then the dog will pick it up.

They can hear higher-pitched sounds much higher than humans can register. And there are capable of hearing much softer sounds too.

Dogs don’t necessarily need to be in the same room as a human to know they’re sleeping. They can hear the slowed, rhythmic breathing from a different room.

Humans differ in their sleeping habits. Some fall into a deep sleep and don’t move a muscle. Others shift a lot during their sleep.

After some time, dogs remember what movements are typical to their sleeping owners. This gives them another cue that their owners are sleeping.

Do Dogs Sleep When Their Owners Sleep?

Dogs love to nap and sleep. And can sleep for up to 12-14 hours. Dogs often sleep when their owner is sleeping as part of their own routine.

Many dogs thrive in a routine environment. Especially breeds that are prone to stress and anxiety.

They quickly pick up the bedtime activities of their owners, even if there isn’t much of a routine.

Dogs are all about habits. They don’t associate night-time with having to sleep. A lot of dogs regularly nap during the day for hours at a time.

Additionally, they learn the repercussions of disturbing their owners from sleep.

Typically, the house becomes quieter and darker as the dog’s household settle into their beds.

Depending on the owner’s preference, the dog might stay in a cage or a particular room during the night.

And they’re expected to remain quiet. Otherwise, they could face discipline.

With these patterns and the potential lack of access to food, most dogs tend to settle down to sleep as well.

They are denied the same stimuli as they experience during the day.

So, they might start out feeling bored and acting out because of it.

But after establishing bedtime, they usually adjust and sleep with their household.

Does My Dog Know When I Wake Up?

Dogs know when you wake up for similar reasons to why they know when you’re sleeping. They detect changes in your breathing, body, and chemical release to know when you’ve woken up.

Once again, dogs use their impressive senses of sight, smell, touch, and sound to discover when you’re awake.

If they’re close enough, they’ll be able to look at your eyes and notice any blinking and movement even if your eyes are still shut.

Excluding those cues, most people will shift when they wake up. Or roll over to check the time.

This is the most obvious sign that you’re awake for your dog to notice.

Just as the release of melatonin helps you sleep, the hormone cortisol handles waking you up. An increase of cortisol happens before you’re actually awake.

Your dog can sense this smell and know that this smell means you’ve woken up.

This is why sometimes you find your dog waiting by your side for you before you open your eyes.

When you wake up, your body tenses up as you wake from sleep, if your dog sleeps by your side, they’ll register this tension and learn that it means that you’re awake.

It doesn’t matter how subtle these tensions are; your dog will still find out.

It’s impossible to keep your body in the exact same relaxed state as it was during your sleep.

Along with being able to see your breathing changing, your dog will be able to hear the change of rhythm in it.

As you shift in your bed, they will hear the crinkle of the moving sheets and the discreet squeak of the bed’s springs.

No matter how quiet you’re being.

An easy sound cue for them to find out you’re awake is if you use an alarm.

Again, they’ll soon realize that this means you’re going to wake up.

As the alarm becomes part of the morning routine, dogs are known to keep to that time regardless of the day.

Dogs are so clever that it’s no real surprise that they know when you’re sleeping and when you’re awake.

The cues the human body gives a dog are completely uncontrollable and involentry.

And because of these signs; your dog can easily tell when you’re sleeping or awake.

And they’ll have the added help by learning their owner’s normal everyday habits and routine.