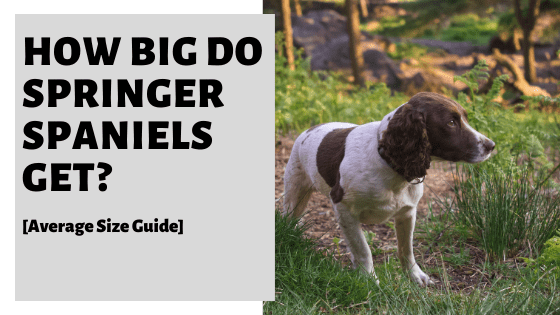 If you are considering a Springer Spaniel as your next family pet, naturally you will want to know how big they get. How long will it take for your Springer Spaniel to reach his full and final size? How much space will he eventually need? Here is everything you are going to need to know.

All Springer Spaniels are sturdy dogs with large paws, built for endurance and hard work rather than speed.

And while they are not huge dogs, they are very powerful and strong, with great stamina and energy too.

Over two hours per day, according to organizations like the PDSA.

Nevertheless, let us explore the size of this active breed in more detail.

We’ll also be exploring the differences and nuances between English/Welsh Springer spaniels, their typical body proportions, how to estimate their full size while they are still young, and more!

There’s a lot to learn.

At What Age Is A Springer Spaniel Fully Grown?

Both English and Welsh Springer Spaniels reach their adult proportions by about 18 months of age, on average.

With this being said, every dog is unique, and not all Springer Spaniels may reach their final size and adult weight by 18 months – some may get there quicker (~16 months), some a little later (~20 months).

This is why it’s just an average although it is typically seen across the breed.

Nevertheless, here are some growth stages to keep in mind:

What Do Springer Spaniels Look Like Once Fully Grown?

There are differences in appearance between English and Welsh Springer Spaniels, so let’s take a look at each breed separately.

Your adult English Springer Spaniel will be taller than the Welsh breed by about 2 inches, standing at 19 to 21 inches tall if he’s a male and 18 to 20 inches tall if you have a female.

For their overall body proportions, English Springer Spaniels are leggier than their Welsh cousins.

Among all Spaniels, the English Springer is the tallest and has the longest legs.

They are compact rather than square and are very upstanding. English Springer Spaniels are slightly longer than they are tall.

Within the English Springer Spaniel breed, there are two types that differ slightly:

English Springer Spaniels come in several colors: usually a combination of white and liver or white and black. Either color may be the dominant one.

Traditionally, field types of English Springer Spaniels have been mostly white so that hunters can easily spot them.

Ticking (very small spots of colored hair inside otherwise white markings) can occur on both show and field Springer Spaniels.

If the black genes are diluted, this can cause a ‘blue’ color which often occurs with roaning, giving blue roans.

If you have a Welsh Springer Spaniel, he will most likely be slightly smaller – only by an inch or so.

In terms of overall body proportions, Welsh Springer Spaniels are known to be a bit like “a square inside a rectangle,” rather than leggy.

The length of their bodies from the withers to the set-on of their tails is either equal to or slightly more than the height of the withers.

Note: The withers is known as the area above the shoulder of your dog, and is used to measure his height from the ground.

Unlike English Springer Spaniels, there is no differentiation made between field and show dogs.

Once a week is usually enough grooming to maintain their coats.

Welsh Springer Spaniels are always a combination of white with reddish-brown patches. They are also called red and white dogs.

Welsh Springer Spaniels may have some ticking. Ticking is acceptable in show dogs.

Do Springer Spaniels Need A Lot Of Space?

Both English and Welsh Springer Spaniels need lots of exercise, as they are working dogs. The short answer, then, is yes, they do need lots of space!

These dogs aren’t happy in small gardens or in apartments: they need lots of space to play.

They also need, ideally, another doggie friend to play with.

Both Welsh and English Springer Spaniels will love to accompany you on walks, runs, hikes, or even bicycle rides.

English Springer Spaniels are known to be the fastest of the spaniel breeds, but both types have very high endurance levels.

If you are looking to get a family pet rather than an exercise companion, you’re better off choosing a show-type English Springer Spaniel.

Your dog will still need lots of space and exercise, but not quite as much as the field types.

When Springer Spaniels don’t have enough space to run and play, they may find ways to entertain themselves that you don’t approve of, including digging up holes in the yard or tearing into furniture!

One way you can give these dogs lots of enjoyment and stimulation is by letting them have the room to follow their noses.

Both English and Welsh Springer Spaniels make excellent trackers: they can track not only animals but lost people, too!

Springer Spaniels are often used as detection dogs in airports and schools because of their friendly natures and excellent noses. These dogs have even been used to detect mines.

They also make excellent therapy dogs because they become very attached to their owners.

They don’t undergo therapy training as such (this would distress them, as they would be required to live elsewhere for the first year of their lives.)

Springer Spaniels become therapy dogs because of their attachments to their people.

So make sure you are able to make a long-term commitment to your Springer Spaniel because he will crave your company and attention for his whole life.

How Can You Tell How Big Your Springer Spaniel Will Be?

However, this is only an estimate. There are other factors that you need to consider:

Other Factors That Affect the Size of Your Springer Spaniel

In addition to the above, there are other factors that can affect the adult size of your Springer Spaniel, whether he’s a Welsh or English breed.

The better your puppy’s nutrition, the more efficiently he will grow.

Be sure to check with your vet or with the breeder if you aren’t sure about the best nutrition for your puppy’s needs.

Growing puppies require a well-balanced diet to make sure they develop healthy bone structure and muscle tone, so it pays to do a bit of research.

Some people carry out DNA testing to get a more precise idea of the future size of their dog, though this isn’t strictly necessary.

Genetics does play a role in the adult size of your puppy, which is why it’s often easier to look at the size of the parents.

If you don’t have access to the parents, a DNA test can be the next best thing.

As we mentioned above, Springer Spaniels need lots of exercise as adults, never mind as they develop as puppies.

Exercise is crucial for both English and Welsh Springer Spaniels, as for all dogs: however, working dogs are particularly in need of lots of physical and mental stimulation to stay healthy.

Make sure you give your hardy ‘work dog’ lots of jobs to do, games to play, and exercise.

Give your dog not only plenty of time to play but time to sleep.

Busy dogs need rest, too! And puppies develop while they sleep – that’s the only time they stay still for long enough!

Cocker Spaniels are not the largest of dogs.

But they are certainly one of the most athletic and energetic.

You will need to take that into account if you are yet to get one.

You’ll need to factor in regular exercise and play, and generally, the more safe space that you can afford to them – the better.

And that’s true of both English and Welsh Springer spaniels, despite their differences.

Ultimately, if you want to get a true reflection of the potential size, speak with the breeder.

Ask them about the parental dogs used for breeding and the size of the puppies from any prior litters.

They should have taken recordings, and as such be able to give you a rough estimation.

Other than this, it’s just a matter of taking good care of your dog, perhaps running a little math (and estimating yourself) when they are 12 weeks using a formula like the one above, and eventually seeing what unfolds!

Oh and be sure to read my guide on the springer spaniel temperament. It’s important you know this!