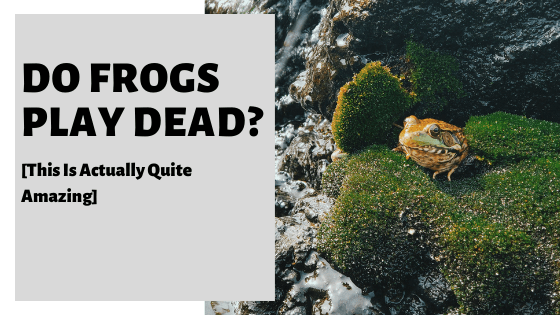 Frogs are pretty vulnerable. They do not have much of a visual deterrent to ward off potential predators. While some frogs are poisonous, there is generally little protecting them from much more formidable carnivores. So naturally, you may be wondering whether frogs can play dead? Do they use this tactic as a means of protecting themselves? Let’s find out.

So, do frogs play dead? Frogs have been known to play dead. In the wild, they do so as a means of staying out of the gaze of predators – who watch out for movement in potential prey. In captivity, they can do so as a result of manipulation and stress. Playing dead in frogs is known as thanatosis.

Thanatosis – an interesting word and a behavior shared by many animals.

Either way, the behavior remains the same.

But why do frogs do it and what does this look like in these amphibians.

Let’s get into it!

Why Do Frogs Play Dead?

Frogs play dead either voluntarily, or involuntarily, in response to a threat. This could be a nearby predator, or it could be a human; as can occur when keeping frogs as pets in captivity.

Either way, frogs play dead as a means of survival.

Its an innate reaction to extreme danger – an imminent threat.

A way in which they can go under the radar and remain either anonymous or not seen as a threat themselves.

Its a protective mechanism; one that evolution has shown to be highly effective.

Now whether this is because they fear being eaten, or that a human could do them harm is neither here nor there.

And it can happen in wild frogs and pet frogs too.

And its shared by frogs of various species.

As such, many pet frog owners have reported seeing their frogs play dead.

And it appears to be more common just after they brought the frog home, or something was drastically changed in their environment.

Whether it was putting another frog in the vivarium, touching the frog too harshly, or just in response to the car journey on the way home.

And its quite normal.

The scientific term for this behavior is Thanatosis, as we have already mentioned.

It occurs in a wide variety of animals – not just frogs – from sharks, to reptiles, to rabbits.

Its primarily a defensive mechanism, but interestingly; in some species, it is even used for reproduction.

When Do Frogs Play Dead?

Frogs play dead as a general response to a perceived threat and when startled. It can occur at any time, come about quickly, and persist for up to several hours at a time.

At the same time, a frog will also leave a state of thanatosis very quickly.

They’ll begin reflexing, before springing back into full life.

Frogs have also been known to play dead as a result of insufficient nutrition – whether this be competition for food or through improper supplementation.

But this should come as no real surprise.

Both in defense and as a result of malnutrition; these both closely associated and linked to a highly stressed state.

Signs A Frog Is Playing Dead

The most obvious sign a frog is playing dead is a complete lack of movement. They will keep their arms and legs tightly closed together and typically lay on their backs with their palms faced up.

If you were to turn them over, they would not react but lay still in frozen-like state.

In time, however, and once the perceived threat has dissipated – they will come out of this still state and move like normal.

And if you are wondering what it looks like in Frog, take a look at this picture of a Leaf Frog playing dead. Captured from photographer Popovkin in Brazil:

How Do You Know If A Frog Is Dying?

The most evident signs a frog is dying, and not feigning death, is when they straighten out all of their limbs, go stiff, and there are a series of small tremors or spasms. Shallow breathing is also likely. This usually indicates a seizure and can be deadly.

At the same time, if a frog does not exit Thanatosis after a sufficient period in a calm, stress-free environment, they will have likely passed.

Generally, it is safe to assume that a frog could still be alive for up to 48 hours after they appear dead.

Unless of course you can see or smell decay. This is another clear sign that a frog has in fact, unfortunately, passed.

If you are unsure of whether a frog is dying or is playing dead, then there are some things you can do.

First and foremost you want to completely minimize any potential source of stress.

This could be you, another human, or the environment in which they are placed.

You may need to make some changes.

At the same time, it is advised that you put them in a sufficiently large vivarium (on their own), and ensure the humidity and temperature is sufficient for your particular species.

Ensure there is no direct sunlight on the vivarium.

You may want to consider gentle misting once per day with cool water and ensure that they are comfortably placed – not buried in any substrate, for instance.

Leaving your frog alone for a sufficient time should enable them to readjust and for their stress levels to naturally subside (so long as the threat is removed, of course).

Seeking advice from amphibian experts or contacting a vet is never a bad idea.

They will be able to offer some insight into what could be causing the Thanatosis, or perhaps even provide treatment for frogs that are sick.

In fact, its been an incredibly useful mechanism that has ensured their survival for millions of years.

And most species will play dead in certain contexts and circumstances.

Usually when there is a severe or persistent threat.

Whether this is a predator or a human – a frog will respond by becoming still and immobile.

For the most part, they will leave this docile state within a matter of hours.

But sometimes it can last for up to 48 hours.

So if you have a pet frog, it is essential you know and can identify the signs of death.

And if you cant; be sure to contact a vet or amphibian expert.

You may just be surprised to discover your frog is still alive. Even if all the signs suggest otherwise!