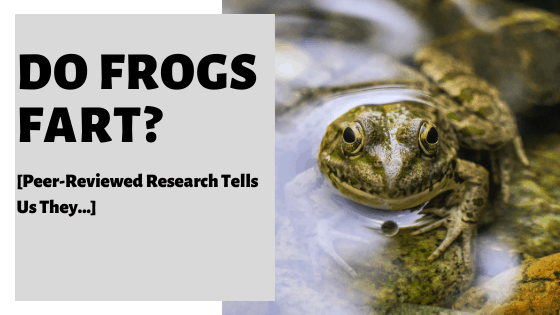 Farting. It is not something you associate with frogs. But can or do they actually do it? I wanted to find out, so I spent some time researching this amusing topic. Here is what I managed to find.

So, do frogs fart? Frogs do and can fart. Although, their relatively small size paired with their weak sphincters makes any sound largely inaudible. Some of the larger species, such as African Bullfrogs and Horned Frogs, are known to fart more consistently and even release foul odors when doing so.

It depends a lot on the species.

Besides, frogs come in different shapes and sizes.

And their insectivorous and omnivorous diets vary quite dramatically too.

Nevertheless, let us take a closer look at the process of passing gas in these croaking amphibians.

Frogs can fart; however, they do not make any sound when they do so. So not only does this make them very hard to detect, but there isn’t the association with farting we have come to expect.

That being said, the larger species make it quite clear they can.

And the releasing of foul odors that are known to smell quite bad is perhaps the clearest evidence yet!

And if you are wondering how these kinds of conclusions are drawn – there is actually research into this kind of thing.

Well, a Ph.D. student in biological sciences from the University of Alabama set up a Google Docs spreadsheet to track which animals can fart across the animal kingdom.

And here is the description and notes that accompany their entry:

“Pyxicephalus adspersus and Ceratophrys sp frogs both can and do fat quite often and rather pungently. (Frogs have weak sphincters, unconfimed if audible).”

And even more importantly, this information has been verified by Dr. Mark D. Scherz – an Evolutionary Biologist, Taxonomist, Herpetologist who studies Cichlids, Reptiles, and Amphibians.

While the spreadsheet is currently publicly accessible, it is ‘view-only’.

So, we can safely assume this list is being closely monitored and only updated with legitimate information.

Peer-reviewed, if you will.

When Do Frogs Fart?

When Do Frogs Fart?

Frogs are most likely to fart following the consumption of a meal or during the process of digestion.

It’s very similar to in us humans.

Farting is simply the passing of gas from the digestive system out of the back end.

And it’s essential for us, or an animal, to be able to do so.

Especially if gas has the chance to build up and cause a lot of pressure.

And these gases can be quite numerous.

From hydrogen to carbon dioxide to ammonia.

Its not good for them to hang around. And more importantly, these gasses simply need to go somewhere.

And in the case of the frog – they’ll be passed entirely automatically without any conscious effort or control.

But how do these gasses build up in the digestive tract in the first place?

Well, they are a by-product of digestion.

As bacteria break down the food.

And depending on the species of frog and what they have eaten, it depends on the complexity of the gasses.

Some food matter, for instance, cannot be fully digested.

Certain plant fibers and carbohydrate sugars are most likely here.

Frogs are primarily carnivorous, with a digestive system equipped for breaking this kind of food down.

So if a pet frog were to be fed the wrong food, or a frog consumed an animal that had itself already consumed enough plant matter, issues with gas can arise.

Now a frog may be able to absorb some of this gas, but if too much manages to build, the pressure will result in its passing.

Frogs can fart. Even if in most species, it cannot be heard.

And we have a Ph.D. student and the contributions of others in the scientific community to thank for the confirmation.

It’s not your average study, but it’s an interesting one nonetheless.

It’s perhaps not something I thought I would be writing about here today, but when you stumble across this kind of research – well, you have to look into it!

So, if you have a pet frog and are wondering whether this is something you may hear from time to time – it is very unlikely.

But if you have a larger species, such as a Horned Frog who consumes pinky mice, you might even smell them!