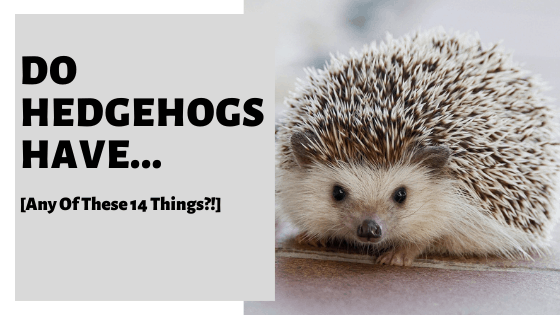 Hedgehogs are interesting animals, to say the least. Some may even say they are peculiar. Besides, they have a wide range of traits, tendencies, and characteristics that make them truly distinctive.

Naturally, we begin to question what they have and if we share any such things in common with them.

Here is what you will want to know about these spikey scurrying mammals.

Do Hedgehogs Have Belly Buttons?

Hedgehogs do not have belly buttons. Although, the penis of a male hedgehog is positioned halfway up their body and has the appearance of a belly button. It is otherwise known as the penile sheath.

Female hedgehogs do not have anything in this area.

Hedgehogs do blink, albeit very infrequently. They are most likely to blink right after they wake up or get something in their eye that they need to remove.

Do Hedgehogs Have Claws?

Hedgehogs do possess claws on both their front and back paws. However, the claws on the front paws are generally much shorter in length than the rear claws (which grow continuously). Therefore, a hedgehog will use their claws for digging, which they do primarily to find food and obtain shelter.

Do Hedgehogs Have Diseases?

Hedgehogs are known for carrying and suffering from a wide range of diseases. They commonly carry Salmonella bacteria along with a range of external/internal parasites (fleas, ticks, mites). They also typically carry ringworm and develop gastrointestinal diseases in consequence.

Equally, hedgehogs are known for developing cancer in older age and pneumonia if the conditions are inadequate and too cold.

Do Hedgehogs Have Ears?

Most species of hedgehogs possess small ears that help them to listen out to sounds and developments in their environment. Hedgehogs are primarily reliant on their hearing to keep them safe, so their ears are sensitive to sound.

There are hedgehogs who possess longer ears. In fact, the long-eared hedgehog species native to Central Asia is a prime example. They even use their ears for heat radiation.

Do Hedgehogs Have Eyelids?

Hedgehogs have eyelids. You are most likely to see them when a hedgehog sleeps, as this is when they are typically closed.

However, some hedgehogs – particularly those new to an environment, will sleep with their eyes open.

Do Hedgehogs Have Bad Eyesight?

Hedgehogs are known for having bad eyesight, instead of being much more reliant on their other senses of smell and hearing to find food and keep safe.

While their eyesight enables them to identify the outlines of objects, they are relatively color blind (can only see in two colors) and do not have great depth perception. Their eyes are also very small in size.

Do Hedgehogs Have Fingerprints?

Hedgehogs do not possess fingerprints. Other than humans, the only other animals known to possess them are gorillas, chimpanzees, and koala bears.

It is believed by scientists that fingerprints served an evolutionary advantage for gripping – not something that hedgehogs have ever needed to do in excess.

Do Hedgehogs Have Fur?

Hedgehogs have a small amount of fur – but this is only present on their face, chest, legs, and stomach areas. On their backs, they possess a thick later of spikes which are called quills.

Do Hedgehogs Have Hair?

Hedgehogs have a small amount of hair – on their face, chest, legs, and stomach. Their backs do not contain any hair. Instead, it consists of spikes called quills.

Do Hedgehogs Have Night Vision?

Hedgehogs have eyes that adapt to night-time vision. They have reflective cells in their retinas (called a tapetum lucidium), which reflects any light in the environment back into their eye rather than through it. This enables hedgehogs to see better and explains the glare their eyes give off when light is shone at them during the night.

That being said, a hedgehog will rely much more heavily on their advanced level of hearing and smell to navigate and remain safe during the night.

Do Hedgehogs Have Periods?

Female hedgehogs do have periods and go through heat. They typically do so for a duration of 9 days. However, hedgehogs are not known for menstruating or bleeding. For this reason, if there is some bloody vaginal discharge, it is advised to consult a vet at the earliest opportunity.

Do Hedgehogs Have Pouches?

Hedgehogs do not have pouches, like other marsupials (including sugar gliders and kangaroos, etc.) Instead, hedgehogs give birth to developed hedgehogs (called hoglets) which they feed and protect in other ways.

Do Hedgehogs Have Quills?

Hedgehogs possess around 7000 quills. These are thick spikes made from a protein called keratin and that run down the length of the back. However, baby hedgehogs (hoglets) will not develop their quills until around 36 hours following birth. Hedgehogs are actually born quill-less!

Do Hedgehogs Have Tails?

Hedgehogs do have tails, although it is short and only around 2cm in length. The tail is also often concealed underneath their spines.

As you can see, hedgehogs are actually very different from us humans. Even if we are both classified as mammals!

At the same time, and interestingly, we do share several similar characteristics and traits.

But perhaps not the ones you might have expected.

Nevertheless, all this does make these spikey creatures all that more fascinating and interesting to learn about and observe!