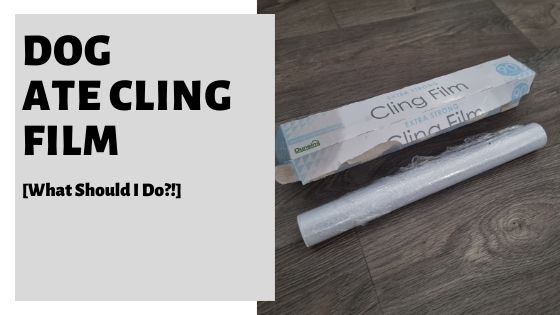 Has your dog decided to eat some cling film? Perhaps they just couldn’t resist the lure of a scent left on the wrapping. Maybe they saw an opportunity to grab it from the kitchen counter or even from an open bin. Nevertheless, you’re concerned, right? What do you now need to do, and how much danger is your dog in? Well, here is how to respond and what to consider.

First and foremost, assess the situation.

Try to get an understanding of exactly what they have eaten, and also consider if your dog may have eaten other food items along with it.

Cling film is non-toxic, but food items it is wrapped around may upset your dog’s stomach. So, there’s always that to watch out for too!

What Will Happen To A Dog That Eats Cling Film?

The good news is that cling film is non-toxic, so by itself, it poses no major poisoning risk to dogs.

The catch is that most dogs that eat cling film do so because the film is wrapped around a piece of food or something else with a pleasant smell or taste.

If the dog ate a toxic food item that was wrapped in the film, it might become ill.

Clingfilm can be a problem if it obstructs a dog’s throat and causes choking.

Clingfilm is designed to stick to itself and easily forms clumps or balls of material that can create a choking risk or a block in a dog’s digestive tract.

A choking dog will often drool excessively, gag without a successful outcome, struggle to breathe, and may lose consciousness.

Choking on cling film is rare but is a medical emergency that needs an immediate call to the veterinarian.

Clingfilm is not typically able to be digested by a dog’s stomach.

Cling film that has been swallowed without problem can ball and clump together as the dog’s system attempts to digest the plastic.

If this ball is passed from the stomach to the intestines but is too large or hard, it can create an intestinal blockage that needs help from a veterinarian to clear.

Dogs that eat small amounts of cling film will usually pass the cling film in their stool within the next day or so.

If a dog has eaten a measurable amount of cling film, or a large amount in comparison to their body size, they may struggle to pass the cling film through their digestive system.

Cling film that does not pass through a dog can cause an intestinal blockage.

A dog’s digestive system can’t break down cling film the same way that it does dog food.

When a dog eats a large amount of cling film, it can wrap and stick together, forming a ball or other large shape.

The dog’s system will try to pass undigested cling film, but the ball of film may get stuck in the dog’s stomach or intestines.

An intestinal blockage is a serious condition for a dog.

When a dog’s system is blocked, digested food and other waste products cannot leave the dog’s body.

This creates a backup in the dog’s system that can make them very ill.

A dog experiencing a blockage is likely to show signs of discomfort, may have a swollen tummy, and may also try to vomit or use the restroom with poor results.

Over time the dog may become lethargic and will often quit eating and drinking.

If you think your dog is experiencing a blockage, call a veterinarian immediately.

In many cases, a dog’s system will pass cling film through, and it will be noticeable in a dog’s stool within 12-36 hours after being eaten.

Any film that is passed by a dog should be cleaned up immediately to avoid being eaten again.

Can Cling Film Kill A Dog?

Cling film is non-toxic, but if it causes a dog to choke or have an intestinal blockage, it can be deadly. The other main hazard is that cling film is often used to wrap food items. If the items wrapped in the cling film are poisonous to dogs, then eating the film could have significant consequences.

Outside of choking, eating cling film is not likely to immediately kill a dog.

Instead, an unmonitored dog may die of poisoning (from food within the cling film) or a blockage.

With careful monitoring for signs of poison or blockage, most owners can get their dog to treatment in time to recover from a bad cling film eating experience.

What To Do Now That Your Dog Has Eaten Cling Film

If you are present when your dog eats cling film, you may be able to reach into your dog’s mouth and remove the cling film or use the ‘drop it’ command for a trained dog to prevent the cling film from being eaten.

If you know that your dog has swallowed cling film, keep calm and follow these steps.

Knowing how much cling film your dog ate and if your dog may have eaten anything that the cling film was wrapped around can help you and your veterinarian decides the best plan for helping your dog.

Take a look around where the dog ate the cling film.

Does it appear they shredded it before swallowing it?

Did they eat an entire helping of leftovers or food from the counter?

Perhaps they just ate a small amount of cling film from the trash can.

Collect this information and keep it in mind as you move through the next steps.

Know When To Call A Veterinarian

If your dog has eaten a lot of cling film in comparison to their size or has eaten other materials along with the film that may be toxic, call your veterinarian right away.

If your dog is having trouble breathing, is repeatedly gagging, or drooling excessively, you will also want to call your vet immediately to ensure your dog is not choking on the cling wrap.

If your dog appears relaxed and in his usual mood and activity level, you may be fine to simply keep a close watch on your dog without a trip to the vet.

Also, if your dog only ate a very small amount of cling wrap without any food attached, you can usually take the watch and wait approach as well.

If, within several hours of eating cling wrap, your dog appears uncomfortable, suddenly stops eating, has excessive thirst, has more than one episode of vomiting or diarrhea, or seems out of character – call your vet and fill them in on the situation.

If you speak with your veterinarian, follow any directions they give you in regards to caring for your dog.

If you decide to wait to call your veterinarian, then it is smart to still keep a close eye on your dog over the next day.

Watch your dog as they use the restroom and look for signs that the cling film has passed through their system.

If you see, cling film pass through your dog in their stool, clean up both the waste and the film immediately. You wouldn’t want your dog to decide to eat the film all over again.

Continue to offer your dog normal meals and water, and be aware that their typical appetite makes any sudden changes.

If your dog has a change in behavior or seems unwell – even 24 hours after eating cling film – call your veterinarian.

Even the best owners have accidents from time to time where their dogs eat unexpected things. The most important thing after a dog eats items like cling film is to take steps to prevent it from happening again.

Make sure to keep all cling film and cling film wrapped items up high where it is hard for your dog to reach.

If you throw away cling film that was used to wrap food, make sure it is in a trash can with a sealed lid or behind closed doors.

Be careful not to leave cling wrapped food out on counters or tables unsupervised.

If your dog has eaten cling film – try not to panic.

Instead, assess the situation and monitor your dog closely.

If in doubt, if you are worried, or if your dog starts to present with adverse symptoms, that’s when you should call a vet.