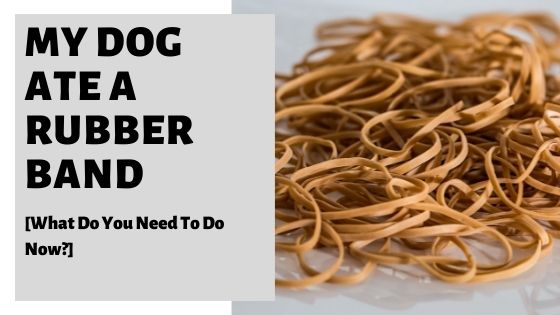 So, what should you do if your dog ate a rubber band? If your dog has eaten a rubber band, it is best to contact a vet urgently. While small rubber bands will usually pass through a dog’s digestive tract without injury, they can get stuck (in the throat, intestines, or around other objects in your dog’s stomach). A vet can ensure safe removal while limiting risk.

You don’t want to take any chances here.

Besides, you could be losing valuable time should the band become entangled.

And what’s more, the procedure will be more challenging and complicated for your vet, not only putting your dog at higher risk but also costing much more to treat, too.

There are some things you can do, though, to support your dog. So keep reading.

But first, why would a dog eat a rubber band, to begin with?

It’s essential to know – you don’t want this happening again, do you?

Why Do Dogs Eat Rubber Bands?

Dogs eat rubber bands for various reasons, but it is most likely that they are just inquisitive and are investigating the band.  It is also possible that a dog can swallow a rubber band accidentally – or fragments if it manages to break. Otherwise, it could be that the texture feels good on their teeth.

For the dogs, they are simply checking out an object – or an animal – and don’t think twice about whether it will harm them or not.

If an object looks fun or interesting, chances are your dog will want to pick it up and munch on it!

Rubber bands are soft and chewy; sensations that feel good on a dogs teeth.

Besides, they are quite similar to dog toys, in that respect.

So, once they manage to obtain a rubber band and get the chance to chew on it, they’ll likely carry on and look to do so again, given the opportunity.

Rubber bands are everywhere, which is unfortunate if your dog likes chewing on them.

Because they are used in home offices, kitchens, garages, and anywhere else in the home, it’s easy for a dog to find some on the floor.

Some children’s toys have colorful rubber bands that can seem attractive to a dog.

Often, rubber bands get left outside when mail or parcels are being delivered or received.

What Will Happen To A Dog That Eats A Rubber Band?

Most of the time, your dog won’t come to any harm from eating a rubber band. Sometimes, though, the rubber band can create a lot of damage. Consequences can even be fatal.

Can A Dog Pass A Rubber Band?

Most dogs can pass a rubber band, but it does depend on the size of the band, the number of bands consumed along with other factors such as your dog’s age, metabolism, the amount of food in their stomach, and digestive health.

Either way, it doesn’t mean he should.

How Long Will It Take For A Dog To Pass A Rubber Band?

There is no set time for how long it will take for a dog to pass a rubber band.

Most things that your dog eats will pass through his digestive tract within 10 to 24 hours.

However, some objects can take as long as several months!

If your dog has eaten a rubber band, you’ll want to get him to the vet so that the vet can remove the rubber band before it reaches his intestines.

Once a rubber band reaches the intestines, it can be more difficult to remove – it requires urgent surgery.

The rubber band also threatens your dog’s intestines (see below.)

Can A Dog Die From Eating A Rubber Band?

A dog can die from eating a rubber band, either from choking or from damage to the digestive system.

Dogs can struggle to breathe if a rubber band is stuck inside their throats, to the point where they collapse and lose consciousness. Death can follow if they are not seen immediately.

Even if the dog swallows the rubber band, it can get stuck inside his intestine.

As the intestine tries to digest the rubber band, the material can cause his intestinal track to rupture. This process is called plication.

Simply put, the intestine tries to move the rubber band forward. But if the band is stuck, the dog’s bowel will fold upon itself (a bit like the drawstring on a pair of trousers.)

A hole in the intestine results, leading to peritonitis, often fatal.

Peritonitis can lead to necrosis, where the infection kills the surrounding intestinal tissue.

The resulting blockage can prevent food from going through your dog’s intestines.

What To Do Now Your Dog Has Eaten A Rubber Band

If you think your dog has eaten a rubber band, call your vet immediately. Any signs of complications can appear quite fast, usually within 24 to 48 hours. If you aren’t sure he’s eaten anything unsafe, there are signs to look out for.

Sometimes you don’t see your dog eating something he shouldn’t. This is why it’s essential to know about some indicators that your dog may have swallowed a rubber band or another foreign object.

Here are some symptoms or signs to look out for that can tell you your dog might have eaten something he shouldn’t:

Because eating rubber bands can be fatal for your dog, it’s best to take a trip to the vet if you believe it’s possible your dog has eaten a foreign object.

If you see your dog is struggling to breathe, get your dog to the vet asap. On the way, check your dog’s mouth for foreign objects, paying attention to:

Sometimes a rubber band gets stuck between teeth and can be partially swallowed, causing choking. If you see the rubber band has NOT been swallowed and it moves easily, you can remove it yourself.

Note: Don’t try to pull out a rubber band that’s stuck in your dog’s throat! You could damage his throat or other sensitive parts. Even if you see the rubber band hanging from his mouth and going back into his throat, don’t be tempted to cut it out yourself. Your vet will sedate your dog to remove the rubber band safely.

Perform The Heimlich Manoeuvre On Your Dog

Here’s how to help your dog remove an obstruction using the Heimlich Manoeuvre.

Don’t pick up your big dog because you could inadvertently cause internal damage.

Here’s what to do if your dog is standing:

If your dog is lying down on his side:

After the Heimlich Manoeuvre, no matter the size of your dog, check his mouth.

You may have dislodged something, and if it’s now in his mouth, it should be loose enough for you to remove yourself.

What Your Vet Will Do

If you’ve brought your dog to the vet, here’s what you can expect. Your vet can do any of the following:

Note: If your vet needs to carry out extensive procedures on your dog, know that a rubber band can have expensive consequences. Surgery and other procedures can run up vet bills ranging from hundreds to thousands of dollars.

How To Prevent Band Eating From Happening Again

If you’ve just had a scare at the vet and have come home a bit poorer, you will want to know how to stop your dog from eating more rubber bands.

Here are some prevention ideas:

For what are relatively boring objects, rubber bands can cause a lot of damage to a dog if they are eaten.

Can being the most important word here.

The truth is, some dogs are able to safely pass them.

But that doesn’t mean you should leave it ‘to chance’.

So, if you know that your dog has swallowed a band, get in contact with a vet as soon as you can.

The fast you act, the easier it will be for your vet to get it up and out of the system.

And they can support your dog during the process too.