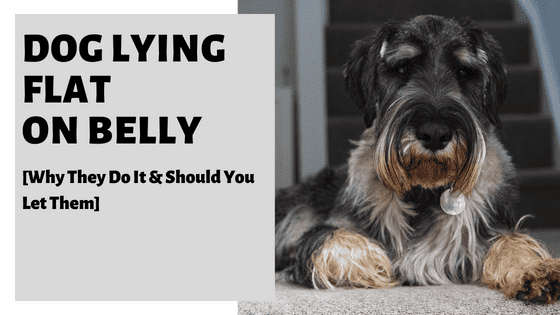 Have you noticed that your dog lies flat on their belly? It may initially humour you, but at the same time, it does make us question whether they are truly comfortable (or even safe) in this pose. Especially if they do it often. Why would a dog even want to position itself in such a way? Well, here is everything you are going to want to know and consider.

The truth is, this is just one of many positions a dog may lie in (perhaps you know this already).

Nevertheless, dogs lying position actually can tell a lot about its mood and wellbeing.

So let’s delve deeper into the ‘flat on belly’ position before delving into those other positions you are going to want to know all about.

Why Do Dogs Lie Flat On Their Belly?

Dogs lie flat on their bellies for various reasons. Sometimes they want a cozy stretch, but other times they may be in pain or uncomfortable.

They’re Having A Comfortable Stretch

Some dog breeds are particularly prone to lying on their bellies for a comfortable stretch.

Lying flat on his belly with his front and rear paws fully extended provides your dog with an effective full-body stretch.

Breeds most often associated with lying on their bellies include:

Note: The above breeds are more likely to lie on their bellies, but any dog can choose to lie in this position.

Sometimes a dog will lie on his belly because he’s in pain.

If you notice your dog is often choosing to lie this way, you may want to visit your vet to make sure he isn’t suffering from hip dysplasia or associated secondary arthritis.

There are several reasons why you might want to be concerned if your dog suddenly adopts this position (see below).

Your dog might be lying on his belly on the cool tile floor because he’s feeling a bit hot, and he wants to cool down his belly.

The Position Comes Naturally To Them

Some dogs are naturally very flexible in their hips, so lying flat on their bellies may just be an enjoyable position that comes naturally to them.

Lying flat on their bellies is common among dogs with lots of energy, who then want to rest in a position that will allow them to jump up quickly again.

Puppies, who are more flexible than older dogs, will often choose to rest in this way.

Should You Allow A Dog To Lie Flat On Their Belly?

You can allow your dog to lie flat on his belly, provided he isn’t experiencing discomfort or if it is a consequence of a health issue or injury.

As long as your dog is fit and healthy, lying flat on his belly isn’t a cause for concern, and he can do it as much as he likes.

However, if you notice your dog starting to lie flat after an injury or as he’s getting older, there may be an underlying problem that you’ll want to address.

Several problems could drive a dog to want to lie on his belly to seek relief. Some of these problems include:

Symptoms Of The Above Conditions

Spotting the symptoms of the conditions mentioned above can help your dog get relief sooner, so keep an eye out for:

There are particular signs to watch for that could indicate joint discomfort, such as:

If you notice any of the above signs, get your dog to the vet for a proper diagnosis and treatment.

If you are happy that your dog is healthy and that he’s lying flat on his belly out of comfort or choice, you can make him comfortable by providing suitable sleeping places, offering favorite toys, and being in the same room.

If you live in a warm climate, provide cool floors for your dog to cool down on his belly. When it’s warm outside, dogs like to sleep on surfaces such as:

If the temperatures tend to be low where you live, provide suitable spaces for your dog to lie out flat while still keeping warm, such as:

Have on hand your dog’s favorite toys so that he can have a good chew while he’s lying flat on his belly.

Be In The Same Room

If you are in the same room with your dog, he will be more likely to want to stretch out on his belly and relax.

Other Positions Your Dog May Lie And What They Mean

There are many other positions your dog may lie in, from on his side with his legs extended, snuggled up to someone else, or in a donut shape. Each position means something slightly different (see below).

On His Side With Legs Extended

If your dog is lying on his side with his legs extended, this usually means he’s feeling comfortable and has complete trust in his surroundings. He feels safe and relaxed, and he’s at a comfortable temperature.

This position is very common in puppies as well as older dogs. It’s also the position where your dog is most likely to enjoy the deepest levels of sleep.

If you suspect your dog dreams about running, this position is the one where you’ll most often notice those paws twitching as he dreams of chasing those squirrels!

When a dog lies on his back (with or without his feet in the air), that’s his way of showing that he’s confident and comfortable. His belly is vulnerable, so if he’s openly exposing it, he’s feeling safe and secure.

With His Head and Neck Raised

Sometimes a dog will seek a position where his head and neck are raised in relation to his body.

You may see him resting his head on the side of the couch, a pillow, or the edge of his dog bed.

If your dog often likes to lie this way, it could mean he’s having trouble breathing.

Of course, some dog breeds have chronic breathing difficulties because of the structure of their faces (pugs and other brachycephalic breeds).

This position can indicate a health problem if you notice any of the following:

Some of the above symptoms could indicate a serious problem, such as chronic heart disease: if this is new behavior, get your dog to the vet for a checkup.

On Top of Someone Else or Back-to-Back

If your dog sleeps on top of another dog – or on you – he is demonstrating that he wants to get closer to whoever he’s sleeping on. The same holds true if he’s sleeping back to back with you, another dog, or the family cat.

This behavior is carried over from when your dog was a puppy, and he snuggled up to his mother or his siblings to keep warm before he was able to regulate his body temperature on his own.

Cuddling, as with many animals, becomes a comfort habit over time.

In A Lion’s Pose (Sphinx Pose)

The lion’s pose (or sphinx pose) is when your dog is sleeping with his head on top of his paws.

He may look like one of those statues of dogs you see outside large buildings. Your dog may also adopt this position with his front paws tucked in and his back legs to one side.

In this position, your dog is resting but not sleeping deeply. Sometimes a dog will begin resting in this position because it enables him to jump up quickly if he needs to.

When your dog is in a curled-up position (or a donut shape), his limbs are tucked in close to his body, and his vital organs (his belly area) are protected.

Sometimes his nose may touch his hind legs, and his tail may drape over his body or his head.

Dogs who are sleeping in this position are often trying to protect themselves while they sleep.

It can also be a sign that they’re still getting used to an unfamiliar environment. If your dog is new to your home or has been a stray, he may often adopt this position as he gets to know you and his surroundings.

Dogs will also sleep in this position if they are too cold. Curling up in a ball helps them preserve body heat, so be mindful of the temperature if you often see your dog sleeping this way.

Dogs sleeping outside will curl up on windy or cold days to protect themselves from the elements.

If your dog burrows under blankets, pillows, or clothes, he’s looking for security and comfort. He may also be attempting to calm himself if he’s anxious.

Other times, burrowing may mean your dog wants a break from watching over his household and his pack members. He may be trying to block out distractions to get a peaceful nap.

Other Names For Lying On His Belly

There are many names for this particular position, which can be useful to know if you want to investigate your dog’s behavior further:

You may see variations of the “sploot” position, depending on your dog’s flexibility. Here are the most common variations:

Lying on the belly is actually a common position for dogs.

Even more so if you are the owner of certain breeds.

Most of the time, it’s a sign of comfort, but there is always the possibility your dog could be in pain or be carrying an injury.

So do be mindful of other accompanying behaviors or if there is an immediate preference for this position, and do contact a vet should you notice any issues or are concerned.