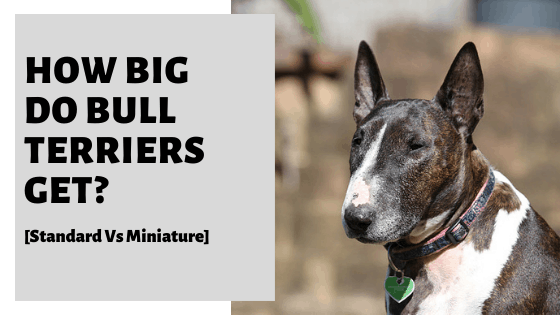 Bull Terriers have an interesting breeding history; initially created by mating Bulldogs with the Old English Terrier, a breed which has now gone extinct. Since then, white Bulldogs have been bred with white English Terriers to create the white Bull Terrier that we know of today. But how big does the modern-day version of the dog get? What can an owner expect in terms of their height, weight, and general size? What about the standard and miniature versions? Here is what you will want to know.

Both the standard and miniature Bull Terriers are unique to look at and distinctive in appearance. Both bear the signature head, which is shaped somewhat like an egg and is flat on top.

They also have small dark eyes that are relatively close together. They have pointed ears, a wide body and a tail that is medium in length.

To make this breed even more fascinating, there used to be three versions of the Bull Terrier! The Standard, Toy, and Miniature, from largest to smallest respectively.

For some reason, the Toy Bull Terrier fell out of favor and thus is no longer around, leaving only the Standard Bull Terrier and the Miniature Bull Terrier.

Let us now take a closer look at the average size of both the standard and miniature versions.

We’ll also be looking at when you can expect either dog to be fully grown and reach their mental maturity.

Finally, we will explore some of the things an owner will need to do in order to ensure that their dogs reach their growth potential.

So, be sure to keep reading all the way through if you want to know exactly what to expect when taking in either of these sweet-tempered dogs.

What Is the Average Size Of A Bull Terrier?

Male and female Standard Bull Terriers are one of the few breeds of dogs that are the same height. The standard size Bull Terrier stands at 21 to 22 inches at the shoulder. There is quite a difference when it comes to their weight, however.

Standard Bull Terriers are larger than the main breed that they originated from, the Bulldog, also known as the British Bulldog or the English Bulldog.

The English Bulldog, another breed in which the males and females are the same size, is a measly 16 inches in height at the withers, in comparison.

The extinct Old English Terrier was larger than both the English Bulldog and and the Standard Bull Terrier, and there was a difference in size between the males and females.

The females came in close to the same size of the current day Standard Bull Terrier at between 20 to 22 inches at the withers. The males were a couple of inches larger, coming in between 22 and 24 inches.

What Is The Average Size Of A Miniature Bull Terrier?

There are three ways in which dogs are bred for miniature varieties:

Each of the three processes have positives and negatives associated with them for breeding, and they would all have factors in the size of miniature versions of dogs.

At What Age Is A Bull Terrier Fully Grown?

The Standard Bull Terriers are considered a medium breed of dog and the Miniature Bull Terrier obviously fit into the miniature category, and both have a different timeline for growth.

Standard Bull Terriers reach their full height between 12 and 14 months old, however, they will continue to add on bulk for up to a year, reaching their full size sometime between 20 and 24 months.

There is no evidence that one gender of the Standard Bull Terrier will reach their full size before the other. Each dog is individual when it comes to reaching their full size and many factors can go into it.

Miniature Bull Terriers are a little slower than other miniature breeds in reaching their full size. Normally, a miniature breed will reach their full height between 6 to 8 months, with maybe weight being added on for a few months afterwards.

When it comes to the Miniature Bull Terrier, they reach their full height and weight between 11 and 12 months of age. They are one breed that does not add on extra weight or bulk after reaching their full height.

What Age Does A Bull Terrier Mentally Mature?

The Standard Bull Terrier and the Miniature Bull Terrier have different timelines when it comes to mental maturity.

Just like with their size, the Miniature Bull Terrier has gone off script when it comes to reaching their mental maturity.

Most miniature breeds will reach their mental maturity between 6 and 12 months, however, the Miniature Bull Terrier doesn’t reach theirs until they are at least 17 months old.

For both versions of the Bull Terrier, you are going to have a fully-grown dog physically, while dealing with a puppy for quite some time to come!

Getting your puppy socialized and trained at an early age can help with some of their puppy behaviors.

How To Ensure Your Bull Terrier Reaches Their Full-Size Potential

As dog owners we love our dogs and always want what’s best for them, that includes helping them to reach their size potential. But not only do we want to help them to grow as they should, we want to ensure we are helping them get there safely.

While Bull Terriers don’t generally have joint issues as a breed, you still don’t want them to grow too big, too quickly as it will put unnecessary pressure on their joints and can cause issues for them later in life.

At the same time, you don’t want to take your Bull Terrier off puppy food too soon as you will be denying them important nutrients that their brains and bodies need.

Puppies should only be kept on puppy food for about a year, after that they will continue to receive booster nutrients that will make them grow faster than what their bodies are prepared for.

As your Bull Terrier, Standard or Miniature, is about to turn a year old, speak with your veterinarian about what adult dog food would be best for them.

There are specialty foods for miniature breeds, which are also usually in smaller kibbles which are easier for smaller dogs to consume and digest.

There are also foods that help with kidney function, a problem that Bull Terriers are known for, and other conditions that your vet can help you with.

Healthier dogs will definitely have a better chance at reaching their full-size potential.

One other factor to consider, and this mostly applies to those of you whom are looking at a puppy, is to to ensure you only provide appropriate exercise for their age.

Doing too much too soon can damage and interfere with their growth plates. This is tissue at the end of your dogs bones, which strengthen and extend as they age. In fact, even deformities can occur – like leg bowing.

For the standard version of the breed, you should exercise caution with their activity until they are 8 months old, and for the miniature, 4 months old. This is when their respective plates should close.

Before this time, ensure activity is not too rigorous; such as running with your pup or making them walk too challenging paths and trails.

Another way you can help your Bull Terrier reach their full-size potential is not to have them spayed or neutered too soon.

By neutering or spaying your dog too soon they can be deprived of important hormones that are needed for them to reach full size.

In most cases if you spay or neuter at a young age, it will not hurt your dog, but you might be able to tell, especially with the males, that they could be smaller than the average size of the breed.

The Bull Terrier has an interesting history, from originating from an extinct breed to going to three versions, and then down to two versions.

At every step of the way, the breed’s size has changed.

Unlike some other miniature breeds, there isn’t much difference between the Miniature Bull Terrier and the Standard Bull Terrier, other than their size.

When it comes to being fully grown, both mentally and physically, Bull Terriers, both the Standard and Miniature, don’t follow the norm for other dog breeds their size.

They take much longer to reach full maturity than most breeds and have a larger window of when that time can come.

There are different factors that come into play when dealing with their size, especially when it comes to the Miniature Bull Terrier.

Everything from breeding, feeding, and fixing can have an impact on the size of your Bull Terrier.

Just because Bull Terriers are not large dogs do not mistake them for easy dogs.

They are exuberant, social, but are very protective and do not fit in well with homes that have small children due to their energy.

However, they do make great companions and with proper training can fit nicely into any home as they love being around people and in particular, their family.

Is A Bull Terrier A Good Family Dog?

Bull Terriers make great family dogs, so long as they are properly socialized and trained from a young age. A well-raised Bull Terrier is typically gentle, affectionate, and playful in temperament. However, due to their stubborn nature, high energy, and need requirement for training, they are not recommended to new or inexperienced dog owners or those with young children not used to dogs.