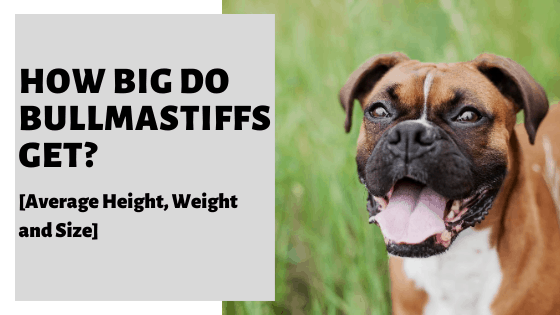 Any dog that comes with the nickname of ‘The Silent Watchdog’ is going to need a little bit of extra research before you decide to get one. Especially for a breed known for being powerful and protective. So naturally, you will want to know how big the average Bullmastiff gets (both in height and weight), and after how much time you can expect them to be fully grown? Here is what you need to know.

So, not only are these dogs tall, but they’re also solid – most of their weight is muscle making them very strong.

Owning a Bullmastiff, therefore, brings the added responsibility of ensuring that they have been sufficiently trained and socialized.

A Bullmastiff is now considered purebred, as there have been at least three generations of the Mastiff and Bulldog mix.

This means we have been able to get a better understanding of their average size, temperament, traits and characteristics.

This data has been used to provide the information that you are about to find out here today.

These giants were originally used to hunt and hold poachers, but are now much more suited for family pet life with their craving for human attention and typical mellow nature.

They are also loyal, reliable and loving which rounds them off as a great breed to own.

Their physicality has also enabled them to spend time as working dogs; as police dogs, watchdogs, and are the main watchdogs used by the Diamond Society of South Africa.

Just seeing these large dogs have deterred would-be thieves from going forward with their plans for quite some time.

But Bullmastiffs will act upon it; they aren’t just big, but they most often don’t like strangers and can be ferocious if and when provoked.

Let us now take a closer look at the average Bullmastiffs general size, along with other considerations relating to it.

This will help you to get a better understanding and enable you to set your expectations if you did decide to get one.

The average Bullmastiff grows to a height, weight and size within a very close range. But while the males and females of the breed are close in size, there is a little bit of difference.

That’s a lot of weight in the extra inch or so that the males have on the females; so naturally they are more bulky, powerful and strong.

But even females carry a strong frame. The weight of a Bullmastiff is largely muscle, they have short hair and not a lot of fat on them.

They are solid dogs who are hard to get to move when they don’t want to.

It’s hard enough moving my 8-month-old Labrador Retriever puppy from my spot on the couch, I couldn’t imagine a fully-grown Bullmastiff!

If you want to get a rough idea as to how big your dog is likely to be, then look no further than the parental dogs. If two large Bullmastiffs have been bred, then you can almost be assured that you will have a larger dog when they are fully grown.

But bear in mind that these metrics are averages and there are definitely Bullmastiffs who are larger than 27 inches and 130 pounds.

When Is A Bullmastiff Fully Grown?

If you plan on getting a Bullmastiff, you need to realize that you’re going to have a puppy for quite a long time. Bullmastiffs take a while to reach their full size, and they need that time so as not to cause damage to their bodies.

In most cases a male Bullmastiff will have finished growing physically in height, but still needs more time to fill out with muscle and weight. Beyond this, extra time is required to mature mentally, which always seems to take much longer than with in females.

While that may seem like a long time to have a puppy running around your house, and a very large one at that, the longer it takes them to reach full size, the better.

Many large breeds can develop issues in their joints if they grow too fast too soon.

To give you a better understanding of their weight at each age, let us take a look at the respective growth rates, of both male and female Bullmastiffs:

Growth Of A Female Bullmastiff

Growth Of A Male Bullmastiff

When Does A Bullmastiff Mentally Mature?

As with humans, females tend to reach mental maturity before the males. Quite often for the females, this can occur in the same time-frame as their physical maturity, at around 18-20 months.

So, if you plan on getting a Bullmastiff, just be prepared to have a puppy (in temperament) for a while.

And remember, if you don’t want your full-grown Bullmastiff to be jumping on your furniture with their full 130 pounds, start early with training them to stay off!

Of course, this isn’t saying that female Bullmastiffs are better than males as they mature faster, if you’re like me, you like knowing that your puppy will be a puppy for a little while longer.

I’m sure it’s somewhat like having kids, you don’t want them to grow up too fast, especially to the point that they start getting more independent and needing less cuddles.

If you have a Bullmastiff, it doesn’t matter their gender or their age, they are still going to want to cuddle with their family.

They are an extremely tolerant and docile breed who are very affectionate with their people.

What Contributes To A Bullmastiffs Size?

Bullmastiffs originated by breeding Mastiffs with Bulldogs. The original mix was 60% Mastiff and 40% Bulldog.

Mastiffs are much bigger than Bulldogs, and if you have a male Mastiff as an originating 60% parent, then you will end up with a larger Bullmastiff.

Nowadays Bullmastiffs breed with other Bullmastiffs, however, their original genes are still passed down.

So, if a Bullmastiff is from a lineage of larger versions of the breed, then they are likely to pass that on. If you have two large versions, then you will most definitely get a large Bullmastiff.

One factor that is not related to genes has to do with feeding your Bullmastiff, especially when they are a puppy.

We’ve already mentioned that it’s not good for a Bullmastiff to grow to large too quickly, and that would be done mostly through feeding.

If you feed a puppy puppy food for too long, they will continue to grow at a fast pace. Puppies should only stay on puppy food for a year, so they would need to come off it before being fully grown.

Some experts say to take larger puppies off puppy food much earlier, while others state that they should be on a large-breed puppy food so that they are getting the proper nutrition. I went through this confusion with my puppy.

Originally, I was told to feed him puppy food until he was 16 weeks, but then to switch to adult food so that he doesn’t grow too fast.

When I brought him in to see my veterinarian for his first appointment, she stated that stopping the general puppy food at 16 weeks was good, but that I needed to put him on a puppy food specifically for large breeds.

At that young age, your Bullmastiff puppy is too young to be on adult food as they will not get the proper nutrition that they need.

Being on a general puppy food will give them too many calories and will have them continuing to grow at a rapid pace.

Large breed puppy food is the happy medium that contains the nutrients that your puppy needs, while also starting to slow their growth rate. I was lucky to get my puppy set up properly as they suspect he’s going to be 85 pounds as it is when he’s a fully-grown Labrador Retriever.

So, all this mention of growing too fast, but you’re probably wondering why it’s so bad. It has the potential to leave your dog with crippling disabilities, such as hip and elbow dysplasia. Some dogs have been disqualified for duty as a Service Dog due to early signs of these issues.

If your Bullmastiff grows too fast then their joints and bones are not able to keep up with the added weight, causing the dysplasia issues. This can be extremely painful and disfiguring in severe cases, sometimes causing a shortened life.

Bullmastiffs are large dogs; I think we can all agree on that! With an average height ranging between 24 and 27 inches at the shoulder, and weighing in between 100 and 130 pounds, these dogs are not for the small and timid owner.

These beautiful giants were once used as guard dogs and poacher trappers, as well as worked alongside the police. These days they can more often be found lounging on your couch, trying to cuddle up to you, not realizing that they are 130 pounds of massive muscle.

Bullmastiffs don’t grow up quick and could have a puppy’s brain for up to 4 years. One thing is for sure, you will need to have patience with this breed. And probably a little bit of strength if you intend to push them off the furniture.

When the Bullmastiff was first bred, it was a designer dog, crossing a Mastiff and a Bulldog. The originator used 60% Mastiff and 40% Bulldog, so this is why they take the size more of a Mastiff, than a Bulldog.

The original genes can have a role in the size your Bullmastiff puppy will have when they become full grown. If you breed two larger Bullmastiffs, you are also likely to have a larger than average version of the breed.

Another factor for sizing comes with their feeding habits. Feed them too much, or the wrong food for too long, and they can continue to grow even larger. Many times, this is to their detriment as it’s often done too quickly, causing medical issues in your dog.

Bullmastiffs may be large dogs but sometimes they forget that and think they are lap dogs, looking for attention. They make a great addition to any home, even if you have children and/or other pets.

How Long Do Bullmastiffs Live For?

The average Bullmastiff will live between 8-10 years. Being a larger dog, their life expectancy is slightly lower than smaller breeds.

Factors that can impact their total life expectancy include genetics, environment, diet, and how they are generally looked after and cared for.

Is A Bullmastiff A Good Family Dog?

Bullmastiffs make good family dogs, due to their gentle and affectionate nature with their owners. They are typically docile, easy-going, and loyal.

They generally do well alongside well-behaved children.

However, Bullmastiffs can be stubborn and a challenge to train. They are equally large, powerful dogs that are wary of strangers and require sufficient socialization to act best around new and unfamiliar people.