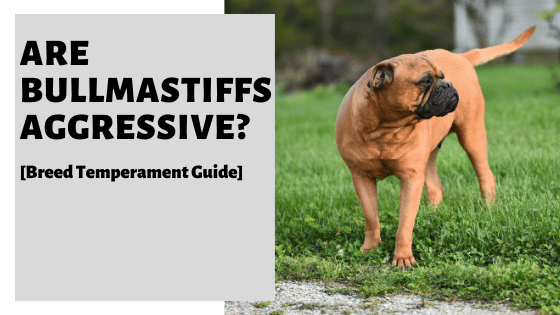 Choosing what dog breed to get is a significant decision, and many things need to be considered before getting one, particularly their typical temperament. While Bullmastiffs are thought to be a dangerous breed by many, they’re also known as gentle giants. So, does it come down to the individual dog, or is it more unanimous to the breed? Let’s find out.

So, are Bullmastiffs aggressive? Bullmastiffs are no more aggressive than any other breed. However, they have strong guarding instincts, so they need to be trained and socialized from an early age to prevent aggressive tendencies. Consistency is also key as they have been known to go through a stubborn phase while young.

In reality, there is a little more to it than this.

So let’s get into the typical temperament in further detail, before looking at potential causes of aggression and what an owner could do to curb it, were it to arise.

What Is the Typical Bullmastiff Temperament?

Bullmastiffs are loyal, friendly, and good-natured dogs. They make great family dogs and are known as gentle giants. However, they have strong guarding instincts and can become aggressive if they feel their family is threatened.

As with all breeds, training and early socialization are essential to a well-behaved dog. And bullmastiffs are no different.

Although they grow into large dogs, they are caring and dependable creatures who love to spend time with their family. They prefer human company over other canines.

Socializing your bullmastiff puppy from an early age with other people and animals is crucial in having a great family pet.

Even though they are kind and caring dogs, their size easily gets them into trouble.

So, it’s important to be mindful of them around small children and the elderly who are unsteady on their feet.

They are famous for accidentally knocking over people as they move around the house and interact with everyone.

Thankfully, it doesn’t take much to socialize a bullmastiff.

Bringing them on walks from an early age will expose them to different people and how to act around them and other animals.

It won’t take too long for their natural friendliness to take over around your friends and family.

Whenever they act well around others; it’s a clever idea to give them a treat or reward to encourage this behavior and prevent them from developing aggressive tendencies.

Bullmastiffs commonly go through a stubborn phase when they’re young.

So, you may need to return to basic and firm training to keep developing good habits in your puppy.

To instill mild and calm traits in your bullmastiff, consistent training and socialization from an early age are crucial as they are a natural guard dog breed.

If poorly socialized, these guarding instincts will result in an aggressive and unruly bullmastiff.

Bullmastiffs were bred to be guard dogs to protect game, so they have strong protective instincts. Nowadays, this protective trait falls on their family. They will act aggressively if they feel their family is in danger.

Bullmastiffs were bred in the 19th century to be the ultimate guard dogs to protect game from poachers.

They were created by crossing Bulldogs with Mastiffs which resulted in an intimidating dog that could chase down and corner an intruder.

This was incredibly important for gamekeepers on large estates.

Although their primary guarding purpose has been reduced, bullmastiffs still have these instincts and will respond in a protective manner.

If your bullmastiff believes their family is in danger, either by an intruder or combative animal, they will do what they believe is necessary to protect their family.

They are a sensitive breed, so it’s worth noting that they might react to arguments between family members.

What Can Make Bullmastiffs Aggressive?

Bullmastiffs may become aggressive for reasons including facing a strange dog, establishing dominance with another family dog, food guarding, if they’re chained up, or as a maternal response.

Understanding what might make your bullmastiff aggressive is helpful, so you train them to stop or prevent the situation from happening again.

Most of these types of aggression can be curbed if socialized properly as a puppy.

And the majority of these aggressions can be categorized into two: having to deal with another dog, especially if they’re male, and as a response to abuse.

In Response To Another Dog

Intra-aggression happens when two dogs of the same sex interact with each other in an aggressive manner.

Agonistic aggression is aggression between two dogs because of a particular reason.

It could be to protect their food, family, or if there’s a female in heat close by.

If these dogs are part of the same household. This can lead to competitive aggression.

They are both trying to out-compete each other to take the alpha dog mantle.

Sometimes, this dominating behavior can be seen in bullmastiffs, even if they are the only pet in the family.

Dominance aggression occurs when a bullmastiff believes they are the alpha of the household.

They believe they are in control and tend to show this aggression type if something happens outside of their perceived control.

This kind of aggression can be dangerous for anyone who tries to discipline them.

The dog sees this as a challenge to its authority and might lash out by growling, nipping, or biting.

In Response To Trauma

If your bullmastiff is a rescue; they might exhibit some aggressive behaviors as a learned response to trauma.

They may have been abandoned or starved.

If you can get the history of their abuse, this will help you work with your dog to overcome their trauma.

The first kind of aggression you may experience is displaced aggression.

They’ve learned to distrust humans, so they will snarl, snap, and growl if you try to approach them or touch them.

Food guarding is a common trait seen in abandoned or starved dogs.

To survive, they’ve had to scavenge for food for themselves. They might believe you’re taking away their food instead of giving it.

Abused bullmastiffs may show this type of behavior when you try to refill their food or water bowl.

They may also display aggressive behaviors towards other animals and pets in the house, mistaking them for competition.

Another aggression type that can also be seen in well-treated bullmastiffs is barrier-frustration aggression.

When they are leashed or tied to a location, they can feel trapped and hopeless, unable to escape.

They will respond aggressively if they realize they are going to be tied up, even if

it’s only for a few minutes outside of a store or in the backyard.

This type of aggression might also be accompanied by fear-induced aggression.

It’s possible the previous owners of your bullmastiff abused them while they were chained to prevent the bullmastiff from defending themselves.

In Response To Medication

If your bullmastiff is medicated, one of the side effects could result in an increased display of aggression.

If you believe medication is the cause of your bullmastiff’s aggression, consult with your vet for a helpful solution.

As A Maternal Instinct

A natural aggression that extends across many animals, not just dogs, is maternal aggression.

New mothers sometimes exhibit unusually combative behavior if you attempt to interact with their puppies.

Even if she is the most friendly and docile dog, make sure to respect and be wary of this aggression and approach her and her pups slowly, watching for aggressive signs.

Excluding the obvious ones of growling, nipping, and biting, aggressive bullmastiffs may keep their ears erect and/or raise their tail and wag it stiffly from side to side.

They don’t tend to bark as they were bred to hunt down poachers quietly.

How To Prevent Aggression In Bullmastiffs

To prevent aggression in bullmastiffs, early socialization is crucial. Along with that, proper training with positive reinforcement will help curb their guarding and protective instincts.

Mindful Of Breeder Or Rescue

If you are yet to get a Bullmastiff, then where you decide to get them could be key to ensuring you get a dog with an even temperament.

Be sure to thoroughly do your research on any breeder, and only go through the recommended and reputable channels.

If you do want to adopt, again, be sure to do your due diligence on the rescue, and be sure to find out each dog’s history before deciding to take one in.

Bullmastiffs grow to their large size quickly, so socialization from the start is vital.

They need to be exposed to as many people and animals as they can before they grow to their full strength.

During this time, they will learn who are friends and how their family interacts with them.

If they notice any unusual reactions from strangers or family; they know that this strange person or animal is an intruder into their home or space and will respond aggressively.

If they aren’t properly socialized from an early age; they won’t be able to distinguish friend from foe and will interpret every interaction as a threat to themselves and their family.

As with exposure to people and other animals, consistent training is vital to have an obedient bullmastiff.

Bullmastiffs are incredibly clever and don’t give up control easily.

Through consistency, they will learn to respect your command and become obedient.

Training them with positive reinforcement has been proven to be the most effective style.

You can reward your bullmastiff for good behavior with treats, affection, or by playing their favorite game with them.

Positive reinforcement will encourage your pet to stay well-behaved and curb aggressive behaviors.

Bullmastiffs are a large and heavy breed. Because of this, they are mistakenly thought to be aggressive.

However, these dogs are commonly known as gentle giants who are loyal, friendly, and good-natured.

They make great family pets, but they do require consistent training and socialization as puppies to curb their guarding and aggressive instincts.

As you can see, a lot of the aggressive tendencies in this breed occur from dogs who have been previously abused or neglected.

So, it’s essential that if you are still keen on getting one you go through the proper channels. It may cost you a little bit more, but it’s essential.

While this is not to say you cannot adopt, it does mean perhaps being more selective and truly understanding the dog’s history before bringing them home.